Vanquish! Finally, a game with guns, soldiers and robots. IN SPACE! This unique concept is the latest blockbuster from all star development team PlatinumGames, I’ve been playing the 360 version recently and here’s what I think so far.

The gameplay is extremely good; the controls follow the standard set by Shinji Mikami’s benchmark Resident Evil 4. The fundamentals are the same, but unlike the survival horror genre, movement is very fluid and fast paced here. You can slide along the ground like a waterslide with your rockets, which is great when moving from one cover to the next. X button ducks behind literally every object in the game. It’s so convenient that it gets annoying sometimes when the “X to cover” icon pops up 80% of the time as you walk around. The only thing I feel they got wrong is the aiming: it’s not broken but it’s sloppy. The first thought I had was how much better it would be with the Wii pointer. This game is mostly about shooting accurately – there’s not much strategy – so it’s a bit of a downer to be stuck not only with dual analog, but a clunkier than usual aiming cursor. It feels a bit like Perfect Dark Zero.

The graphics are technically amazing. There’s so much going on, more than any other game I’ve seen in terms of different effects and particles flying around. When you kill a boss, the game goes to great lengths to show you how dead it is. Technical prowess aside, it’s not a great game to look at: every environment looks the same, and lacks colour. Everything is a mix of white, grey and blue and very sterile, and every enemy is a robot or guy in a suit. That’s the style of the game but it’s not very exciting. It’s MadWorld without the gimmick. 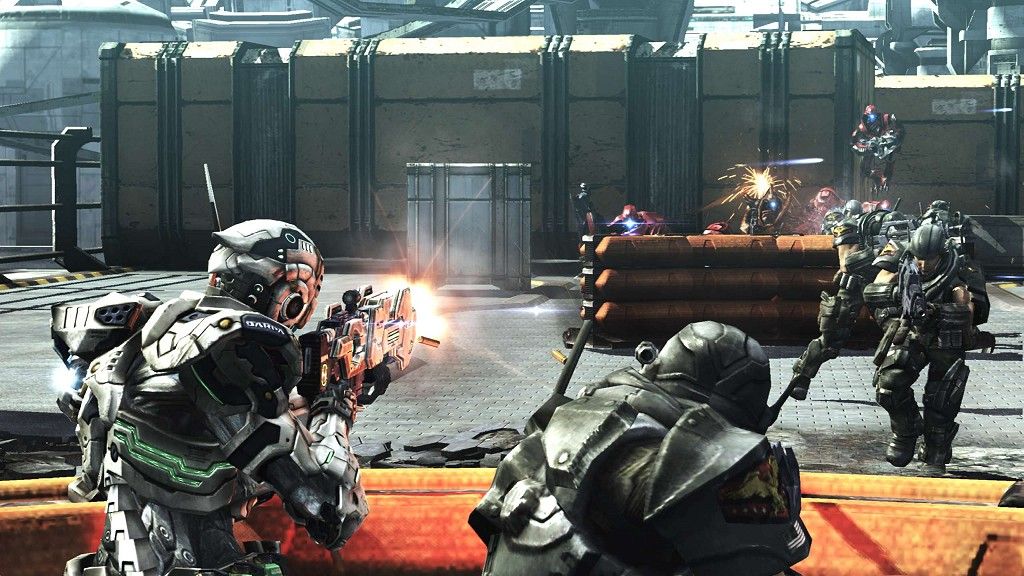 I feel like Shinji Mikami made this game just so he could shoot robots. Nothing wrong with that, but I’m not finding it very engaging so far. Every set-piece in the game is almost identical, shoot enemies, duck and reload, shoot more. Every second area will have a place where you need to put explosive charges and detonate; there’s a lot of explosions. The bosses aren’t very creative either, just unload 1000 bullets into them and they’ll die, or maybe if it’s a creative boss they’ll have a weak spot. The most exciting fights are cutscenes. The story and characters aren’t very motivating either; apparently there’s been a population explosion on Earth in the future, and America and Russia are fighting over something in space and of course America are the good guys. Note that PlatinumGames are a Japanese development team, but there isn’t a big game market in Russia. The characters say fuck a lot, and the whole thing feels like a giant American stereotype that tries to appeal to a market. It’s forced and uninspiring.

Vanquish is short – I beat the entire game in 3 hours and 51 minutes – but it felt like forever. Every level is exactly the same. It was worth it for the interactive end credits sequence however, which I won’t spoil but you can find it on YouTube. I’m going to try the hardest difficulty now, just to see if the gameplay gets more strategic. Unless I really like it on hard mode, I probably won’t post about it again. It’s an enjoyable game so far, but only in short bursts.