Casual, hardcore, non-gamer, casual-gamer. What do all these mean? What language am I speaking? If you’ve read any “insightful” feature articles on videogames in the past 5 years, you’ll know these terms pretty well. Let’s start with where these popular phrases originated, and how these words became “categories”.

The release of Nintendo DS in 2004 was accompanied by the biggest boom the gaming industry has ever seen, spurring the medium not only to new heights, but new audiences. It became the fastest selling gaming device ever, smashing records left and right on the back of games like Nintendogs and Brain Training that reached out to new audiences with the new touch screen interface. In an attempt to understand this phenomenon, gaming journalism somehow wandered up shit-creek, and the term “casual gamer” was born to EXPLAIN these funny looking people who enjoyed simple, lesser game concepts like Nintendogs and Wii Fit. Inferior beings who trained their brains and bodies in a pathetic attempt to match the superior intellect of existing gamers (thus the term HARDCORE gained momentum, to differentiate these people). 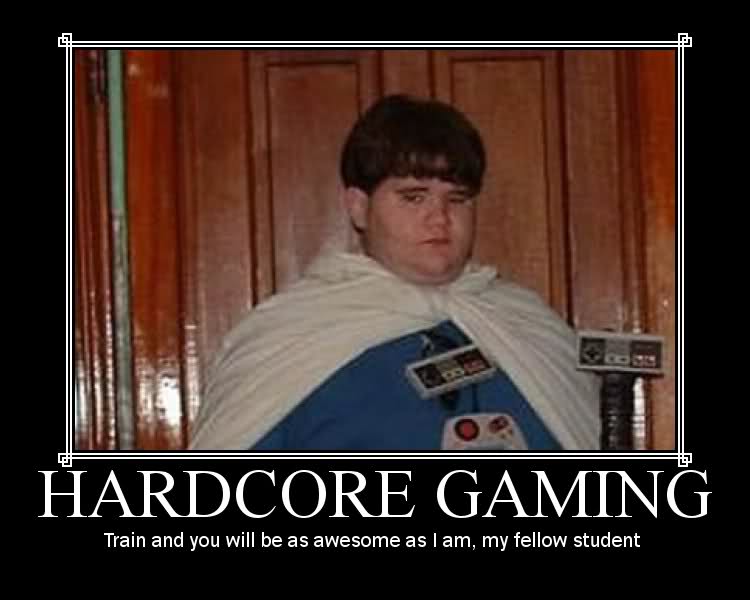 These new games ushered in a new wave of gamers, but it didn’t stop there. Somehow in all this, Super Mario and Mario Kart had become “casual“. New Super Mario Bros. was the best selling Mario game since the original that was packed-in with the NES in the 80s, while Mario Kart DS outsold all previous iterations. This meant the new expanded audience had also embraced the existing game conventions of the last 20 years. Wow, established gaming still matters! Nintendo has done it – the industry is bigger and healthier than it’s ever been. What an awesome headline! Except that wasn’t the headline.

Super Mario and Mario Kart became GROUPED with Nintendogs as casual games. Their definition changed, as they explored new heights of popularity. There’s no way Nintendo could have pulled this off, nuh-uh. We didn’t see it coming, therefore it didn’t happen. It’s not happening, because these aren’t real games! Mario Kart is a casual game, get back to me when Fire Emblem sells 20 million copies.

The term “successful” had morphed into “casual” without anyone batting an eyelid. Little Jimmy who played 3 hours of Mario Kart a day was a casual gamer. Little Rosy who walked her Nintendog every day wasn’t hardcore enough to matter. You can be sure if Fire Emblem did sell 20 million copies, it would be labeled a casual game too. Just like how Super Smash Bros. is a “party” game, and not the most successful fighting game ever.

NOW… the definition has changed again! Casual isn’t even casual anymore! Mario Kart is off the hook, it’s been set free! We’ve gone full circle and a game can be any definition you want it to be! In this article on cnet.com, the guy uses the word mainstream and casual every second line. It’s a complete clusterfuck that makes no point whatsoever and completely falls on its arse and leaves everyone sweaty and confused. Here’s a quote:

Casual isn’t casual but casual IS mainstream, despite not being anything therefore mainstream has no definition in this context, subsequently falling somewhere inbetween being casual and not being casual; lending its existence to any possible circumstance that isn’t one of the two.

WHAT THE FUCK ARE WE TALKING ABOUT?

The journalist who wrote this called it “scintilating wordery” on Twitter. I couldn’t agree more. Yes, I put that in quotes because he spelled scintillating wrong, and wordery isn’t a word. This guy writes for cnet and appears on television representing gamers. The point of the article is that fun isn’t fun, yet it’s fun when it’s casual. This insight isn’t even strong enough to light a fart, let alone a candle of meaningful discussion.

So now we’ve explored the origin of the word casual in gaming industry terms… what does the ACTUAL WORD mean?

“happening by chance; without definite or serious intention; careless or offhand; seeming or tending to be indifferent to what is happening; apathetic; unconcerned” dictionary.com

“suited for everyday use” thesaurus.com

Casual. Mainstream. HARDCORE. This shit is doing my head in; they are stupid terms that don’t mean anything. I tried to figure out this trend and got nowhere, because it isn’t anything. It succeeds in doing one thing: alienating people. We have to get past these ridiculous terms before videogames can firmly plant themselves in our culture as things that don’t need to be explained. Mainstream isn’t a friendly word: it creates the thought that “normal” games aren’t mainstream, that “mainstream” is what a struggling game from the ghetto should strive to achieve.

A game should just be a game. If a game is available to buy, it’s mainstream. It’s CIRCULATING. If you play it, you’re gaming, simple. If you’re NOT playing a game, that doesn’t make you a non-gamer either. I think non-parachuters would agree with me on that pointless definition. When you imply a game should be something else, you admit that being a game isn’t good enough on it’s own, devaluing the entire term. We’re past this, there are enough smart people on the internet now that we can write proper headlines and talk about more exciting things. I know this because I talk to them every day on Twitter. I have hope that in 5 years time, all these stupid articles about “mainstream audiences” and “casual strategies” sound like gibberish from another planet, and we’re actually talking about games without making excuses for it.

7 thoughts on “What Is Casual?”