Combine the creative mind of Suda 51, the structured work ethic of Shinji Mikami, the haunting melodies of Akira Yamaoka and a big hot boner, and what do you get? A pile of steaming hot poo on the floor. 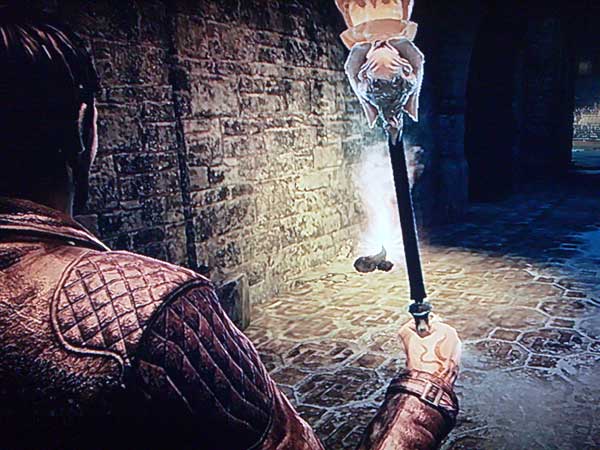 After my misadventures with Resident Evil 6 I decided to do a bit of soul searching and got a craving to play some similar shooting games, simply because I spent so much time adapting to the style. Shadows of the Damned is a game I’ve beaten before and already loved, but after playing so many games in-between I’ve found a whole new level of appreciation for it. This game is exploding with charm, quality and more significantly; identity. Grasshopper’s games are always known for that but Suda 51 has been a bit hit-or-miss since No More Heroes in my opinion, and this game’s style might have more to do with director Massimo Guarini. With all these big names and ideas it could easily be a trainwreck but it all combines beautifully and consistently. Playing this game again awakened a part inside me I had forgotten about, an appreciation for bizarre worlds.

I don’t know how high the production budget was for this but I do know it’s a fraction of a Resident Evil game, it’s just the nature of the business. Nevertheless the graphical presentation of Shadows of the Damned still holds up and it looks phenomenal with a clean framerate (unlike Lollipop Chainsaw which runs like arse). The environments have a very strong style and there’s a lot of effects going on to give it a very heavy atmosphere. It creates an immediate feeling of significance that you aren’t playing something shitty and pointless. The areas are littered with obscenely displayed corpses and crying baby heads, and it’s frightening how effortlessly this stuff blends in and seems normal.

I have no clue how Grasshopper / Suda 51 are still making games with all the spectacular things they cram into every inch of a game like this. People say Suda 51’s trademark is his batshit wackiness in game design, but the thing that strikes me most is how he gets to make so many bombs and still keep the company alive. It’s truly inspiring how a studio can work on whatever the hell they want, regardless of whether their games are a hit, and just keep doing it. The development team did a great job bringing everything in this game to life with no compromises.

The gameplay is fairly simple but when it comes to shooters this is what I look for, I would say it’s a lighter version of Resident Evil 4 with significantly altered themes. The guns are stylish versions of a standard pistol and machine gun, and you also have some explosives and a light gun. Light can be shot at key objects to light up areas and trigger simple puzzle switches. There’s also some limited environment interaction with ledge jumping, door kicking and exploding barrels of light to shoot. The aiming is a typical dual-analog setup but it feels a lot more forgiving than most games that are core shooters, the cursor feels loose and enemy AI is not very good. They usually hang around long enough to get enough shots in while keeping the tension, and headshots are rewarding with a satisfying slow-motion cinematic to emphasise a great shot. There seems to be a moving dead-zone where the cursor adjusts its speed and it’s amazing how smooth it feels, there’s no stiffness whatsoever which I sadly had gotten used to in these types of games.

While the core gameplay is simple I have to give the game credit for never getting boring, and having no annoying QTE sequences whatsoever. It seems a trend of Mikami’s to have a great flow and playable structure to every game, which is very easy to ignore when you’re making “content” as opposed to a videogame (Capcom). It’s also extremely satisfying to do the most basic things in this game; the camera is smooth and everything animates quickly, so you’re not breakdancing on the floor when shit gets serious like in Resident Evil 6. The gameplay’s simple nature makes room for a lot of variety in area design, and the strategy changes a lot with each sequence. To top it off there’s some absolutely MAGNIFICENT boss fights that you’ll have to see for yourself. The enemy design is top-notch and there’s some freakish surprises.

The Big Boner humour appears very childish on the outside but it’s presented with a lot of finesse and bang. There’s some clever dialogue alongside the not-so-subtle one liners, but the important thing is it’s all delivered with great timing and quality voice acting. The game itself is no joke and the comedy is used to deliver some pretty heavy themes. The exaggerated world of extreme obscenities is used very effectively to highlight the inadequacies and regrets of the main character, Garcia Hotspur. The whole situation feels like a lost, helpless man plunging himself into the shadows out of desperation, because he’s out of options in his life. The stubborn “fuck up some demons” attitude from Garcia is a necessary delusion to convince himself he can keep standing and fighting in this new world, it’s a strange mix of bravery and sadness. The fact that the light is the most powerful tool in this world is reminiscent of Alan Wake‘s writers block troubles, except the themes here are much deeper and Garcia isn’t a pansy. He’s fighting for his core existence as a man, and purpose is secondary. Perhaps I’m over-analysing it since these themes never hit me when I first played the game a few years ago, but I’m a different person now and this time feels a little different on the hardest difficulty. So far it’s not too difficult but I have found myself approaching situations differently.

The music is a huge part of the atmosphere and is composed by Akira Yamaoka of Silent Hill fame. It varies from demonic tribal chants to heavy jazz guitar chords all appropriate for the situation, and it’s impressive how effortless it all blends together. There are no attention-grabbing melodies that hit you in the face, but the undertones are very heavy and bring out very strong emotions. I’ve never heard a game soundtrack like this, it’s so raw and intense and captures the unique feeling of stubborn desperation. The soundtrack is so significant to this game it would be a different world on mute, a much more logical one. I haven’t played many Silent Hill games but now I’m keen to check them out because Yamaoka’s work here has a huge impact.

I was inspired to write this because the game is just so damn good it’s awakened the part of me that enjoys writing about games. It’s refreshing to play something with incredible graphics that isn’t so serious and convoluted, yet still very playable and structured. The game bombed hard and is ridiculously cheap now, amusingly sharing the bargain bin with its new friend Resident Evil 6. The difference is this game won’t waste your time, it’s exploding with creativity around every corner. Shadows of the Damned is a very unique game in all the important ways a game can be unique; concept, atmosphere, presentation, music and writing; and delivers it all with very solid gameplay. The child inside me that wished Resident Evil 6 / Titans of Dudebro did all these cool things, is currently very happy as I replay this wonderful game.

4 thoughts on “Shadows of the Damned – Upgrade Your Boner”