Over the holidays I impulse-bought this game just to have a new racing game to play on 3DS while I was out. I wasn’t expecting too much but I’m very happy with it and I think it deserves some recognition. Zordix are not the biggest development team in the world but I really like their approach. Snow Moto Racing 3D is an enjoyable game that doesn’t take itself too seriously. It’s fun to play and features a solid amount of content.

The physics are not very complex but the controls are great, as the vehicle goes exactly where you want with no cheapness or stiffness. There’s no heavy feeling of “traction” like you would expect in a sim, it’s more of an arcade “guns blazing” approach where you don’t have to modulate your acceleration or braking. With the fairly basic button layout of the 3DS I think this is the right idea. The challenge comes from optimising the racing line, staying balanced on the elevation changes and not sliding wide off the track. It’s a really pure racing feeling where you can do slightly better if you just drive better. I love the aggressive simplicity of it. There’s also a boost meter which you can charge up, either by passing checkpoints normally, or taking a risk and doing a trick on a jump. Tricks are easy to execute just by tilting the analog nub, but if your timing is off you’ll be eating snow.

The graphics are not world class but the game does a good job creating a feeling of intensity. Snow gets kicked up in your face by rivals as you try to hold on and squint through the madness. The sun reflects on the icy ground and can blind you in some points so you’ve got to spot some corners before you start turning. It’s a really unique challenge to drive a snow vehicle and deal with these elements, and they captured it wonderfully in this game. The frame-rate is the biggest problem, I don’t know the number but it feels sub-30. I didn’t notice a frame-rate difference regardless of the 3D effect, so I always kept it on because it’s fantastic. Even with a low framerate the game looks better in motion than screenshots.

Weeeeeeeeeee!! The 3D effect is the most technically impressive thing about this game, and it’s honestly one of the best I’ve seen on the 3DS. It’s “wholesome” and has absolutely no jarring moments. With all the white snow I was expecting a lot of image bleeding but there’s NONE, just like magic. Even with other riders shaking their butts in your face it holds strong. You can see this effect even in the 3D eShop trailer, which actually is what pushed me to buy the game. I am playing on a New 3DS, but even on this some games have sloppy 3D. Snow Moto nails it.

The “progression” of the game threw me off a bit at first. I thought I was bad at driving after a few GPs, but that was only because I ignored the garage. You slowly unlock new vehicles, and each vehicle is blatantly better than the last with improved stats in every area. This makes the slow ones completely useless after a few GPs, unless you want a handicap. It creates a rather basic feeling of progression but it was enough to keep me going through the GPs. You can save money and push your luck by using an underpowered vehicle for a bit longer than you should. It’s possible to win out of your class if you drive perfectly, which I managed to do once. 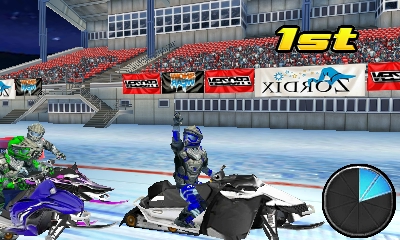 YEEAAH!! I got some pleasure from watching the other racers pout at the finish line, because they are fucking arseholes. The AI is pretty fair in a racing sense, I didn’t notice any rubber-banding or cheating. The problem is you simply can not win 1-on-1 battles due to the awkward collision physics. This is especially annoying at the start of the race when everyone is together and the frame-rate dives into the single digits. My only strategy for these moments is “don’t hit anyone” because they DRAG you off the course like a vacuum. The one positive is that the AI also gets dragged off-track, but getting into a battle with a 4th place idiot will probably cost you a win. The track design is very cool as well. A lot of budget racers just phone it in and clone basic layouts of tracks to pad out the feature lists, but Snow Moto goes all out. There is a TON of variety with 18 track layouts and a mirror option on top of that. Dragons and candy canes add some videogame charm to the standard snow environments, and there’s different night-time, snow, and ice effects that are pretty convincing. They really went all out with the track design in this game and it’s a joy to discover every new track. The music is not amazing but it suits the game. It’s generic rock but not the boring kind, it creates more of an upbeat arcadey feeling which I enjoy.

Snow Moto Racing 3D is a fun racing game with good presentation, solid content, good controls and a few impressive technical aspects. It doesn’t have online play, but it’s got local multiplayer and a StreetPass feature where you can share times. It’s definitely worth it if you’re looking for a cheap racer on 3DS, and significantly cheaper than the budget Wii racers I used to buy and enjoy. This is exactly the kind of game we need more of on the eShop, it fills the void of a neglected genre with solid gameplay. I picked it up for $5 AU on the 3DS eShop, but its $10 now that the sale’s over. I wish I could’ve finished this write-up sooner, but I wanted to complete every GP and get an accurate overall sense. I still think it’s worth it, in this age of bloated garbage I found Snow Moto’s no-nonsense approach refreshing and had a good 4-5 hours of fun with it. There’s nothing pretentious about it, no catches, nothing “in the way” of having fun. Recommended.