It was a lonely Sunday night as the Brazilian GP faced a rain delay. Harsh weather had flooded the track, and the already late 3am start would be pushed back even further to an undisclosed time. From the other side of the world, I faced an existential crisis as I turned off the coverage and stared at my Wii U. My headphones still on, I started browsing the eShop. It was meant to be playing Mario Kart 8 music, but for some reason it was generic eShop music from 2012. What kind of night was this? Could anything go right? I browsed the new releases and saw Grand Prix Rock ‘N Racing. It was a top-down racer, boasting real F1 tracks with a colourful presentation. I like all those things. Wow, a sunny Brazil. After watching the trailer I was sold. To quote the commentator’s thick vocabulary “LET’S GO!“. 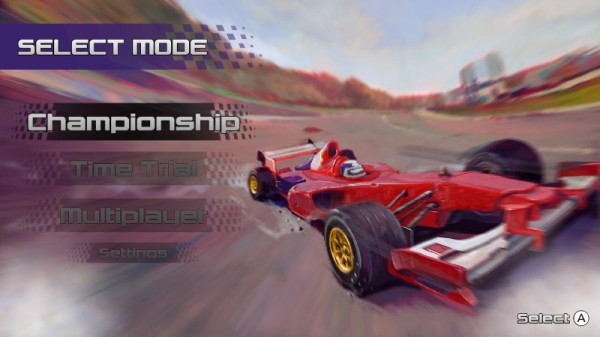 Unfortunately the game is not very good. Almost everything about it is disappointing, bad handling, graphical issues, long loading, sound issues and awkward progression. I’ll start this writeup by talking about the worst things, and creep up to something potentially rewarding. This is how Championship mode unfolds, with 1 single point for every stat on your car. The first track is an oval and you have literally no chance of winning with a top speed disadvantage of over 60kph. The lower you finish, the less tokens you get to upgrade your car, making sure you stay miserable for as long as possible. 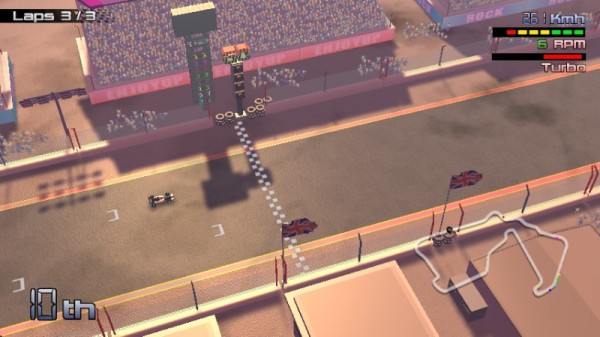 Thanks for the motivation mate. The one benefit to coming last is that you don’t have to sit there and wait for everyone to finish. If you dare play well, you’ll be waiting a good 20 seconds for every other opponent to either cross the line or get timed out. The AI can sometimes crash and get stuck, forcing a timeout waiting period even if you come 9th.

It’s quite a feature. Unfortunately, the sound in this game is not a strength. There is one hard-rock track that I liked at first, but it repeats over and over until you feel like smashing a guitar. The commentary on top of this could push someone over the edge. It’s one dude who says “THAT’S AMAZING” and “THIS RACE IS ON FIRE” regardless of what is happening. It’s Time Trial, mate. “GREAT RACING” No, I’m by mysel-“THIS RACE IS ON FIRE”. It’s fucking exhausting to listen to lap after to lap. There are about 5 quotes in total, repeated every 15 seconds. The guy himself has a self-realisation when counting down the 3,2,1 for the race start, as the 3 and 2 are super excited, with a completely effortless “one…“. It was probably one of the developers doing their best, but man. It’s just unfortunate. Good for a trailer, but not a game.

Alright mate, I’m very close to muting you. Luckily I don’t have to, as the sound is capable of muting itself. There are numerous sound glitches in this game. I’ve had several races where the sound wasn’t synced to my start, and my car started screeching about 5 seconds after the race started. Music also changes volume for seemingly no reason, and once I had no sound at all. That was an enjoyable race. 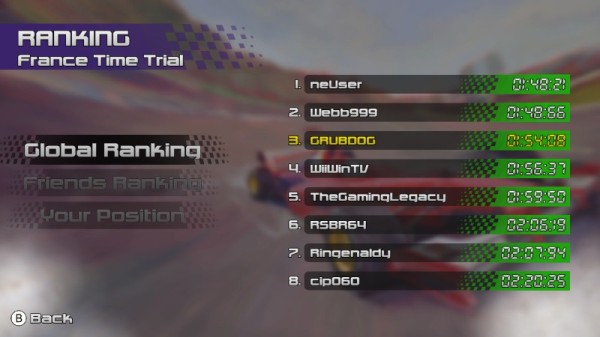 Time to finally talk about how the game plays. I don’t even like it, and I’m 3rd in the world in several tracks, and top 8 in every single one. If someone wants to start a rivalry, feel free to check my times and beat every single one. I basically grinded one session on each track and called it a day. It’s hard work trying to understand this game. While I have ragged on the game for a lot of issues, it can be addictive. Hitting your apex, turning at the right time, and not crashing is very difficult to do, so it feels good when you string a lap together. It feels extra good when you string 3 laps together, and that’s pretty much all I did to get a top time. I know it’s a small community, but it also says a lot about how brutal the difficulty of this game is. I love a good challenge, but there’s something wrong when it’s unplayable for all but 5 people in the world. It has a multiplayer mode which I can’t even imagine busting out at a party. Anyone who hasn’t played the game before will get lapped, frustrated, and never play again.

Can’t everyone just get good, then? Isn’t that what racing is about? The problem with this game is lack of feedback. It’s impossible to tell when your car is losing grip, because there is no rumble, no sound, no visual indicator. The car always looks like it’s stuck to the ground and the tyres are fine. The learning curve is very inaccessible when you have to guess the right approach to many corners. You can also get a magic start boost, but it has no sound confirmation or visual effect. The only way I can tell if I got it, is by watching my speedometer go up slightly faster. Collision detection is also non-existent. If you even scrape the wall or another car you may as well reset (click the right stick), as it’ll put you in a completely random place anyway, and take longer to do so. Your car will vanish for half a second after contact, and teleport to some random safe space. This is presumably so the game itself doesn’t crash, which is just sad. There is no programming whatsoever for making contact with something. Nothing wrong with punishing a mistake, but if the game was good then you’d have the ability to wrestle control of the car back into a straight line. It’s just miserable. 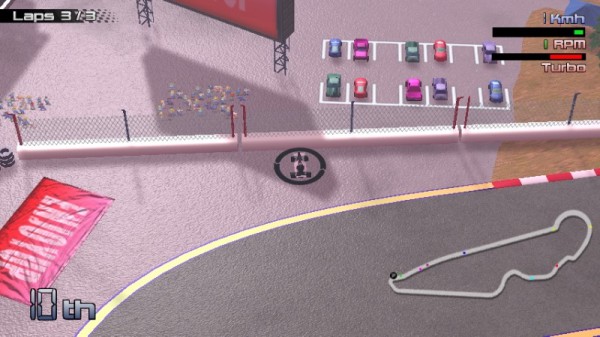 Why did I even bother with this writeup then, just to rag on the game? Nah, I honestly had quite a bit of fun once I learned the tracks. The difficulty is so high, there’s a bizarre sensation when you smash through the racing line on the very edge. The AI is so ridiculous, it’s satisfying when they try to block you and crash. It’s so easy to lose control, and there’s a bit of luck involved too. I learned to fan the throttle almost constantly, just so I could completely lift off when the car was going too wide. This also made my hands hurt after a few minutes. There’s also a bit of strategy in using your Turbo. It won’t change your max speed, but if you press the Turbo button while exiting corners you can gain a lot of time and even stabilise the car a bit. Apart from that, you want to break hard and late for sharp corners, and not bother with brake anywhere else. Just lift off the throttle and you should be able to hit any angle, as long as you can control the car.

This game could have been something special but it’s not. The controls themselves are functional despite the awkward laggy handling, and I like the graphical style even if it has a bad framerate. They had a lot of good intentions, just unfortunate execution. Making the handling feel “realistic” might have been their biggest mistake, because it’s just not fun. As an excitable fan of motorsport and Formula 1, even I struggled to stay interested. I couldn’t possibly recommend this to anyone else. Every enjoyable lap was countered by frustrating spins, or moments with the AI that made no sense. I once drove straight through one of the other cars, like a ghost. Speaking of ghosts, the Miiverse is almost completely empty for this game. The top racers on the leaderboards, Webb999 and neUser, are nowhere to be seen. Big shout out to them for their dedication. I would love to see what a perfect lap looks like in this game, if you guys are reading. Nope, okay then. I can finally watch that race.