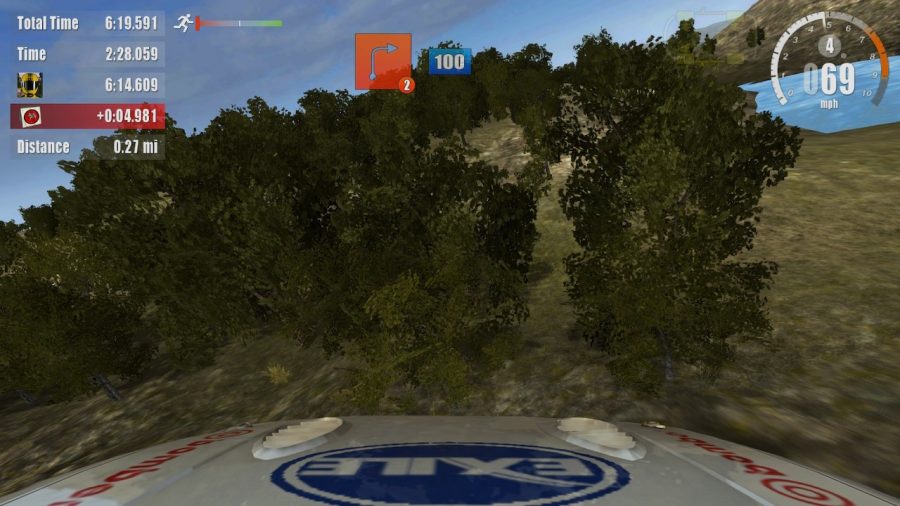 Oops, I was meant to be giving directions. Welcome to Rush Rally 3! A rally driving game on Switch made by a single person Indie team called Brownmonster Limited. This is not the official rally game but who needs that, when you can race against Sebastien Lube and Marcus Groanholm instead?

This game feels very nice to play, from the moment you launch off the line in front of bored officials. They’re happy to be there but they just wish they were driving, that’s all. A nice smooth 60fps and forgiving handling model means you can tear straight into your first rally with confidence. By “forgiving” I just mean the car sticks to the ground well with a decent amount of traction. You still need to brake, be careful, adapt quickly, pull the handbrake through hairpins and the basic rally skills are definitely tested. It’s just a little bit easier than a hardcore sim.

With such a relaxed handling model it puts the emphasis on the fun aspects of rally driving. Compared to circuit racing, rally events are so long and varied that it’s impossible to remember the layouts of every one. So the skill in this game is watching the road up ahead and listening to the co-driver give instructions. If you’re not familiar with rally racing, corners are numbered, with a 6 being a long corner you can take at high speed, and a 1 being a sharp turn that requires slowing down.

Nothing like a nice comfy drive through a snowy forest. You don’t have to worry about sliding off or getting stuck in this car, rally cars are designed for off-road conditions. This is what’s unique about rally, the tracks are super chill with a nice dose of nature. You can experience the outdoors in different countries. Here you get to drive through snow, dirt and forests and just take in the fresh clean air with a small dose of petrol. Well, that’s the strength of driving in videogames isn’t it, no actual pollution? Yeah, I’ll keep telling myself that.

This is a very enjoyable game to look at, from the windmills and grey weather of the UK to the snow of Sweden and the mountains of Canada. There’s also a variety of conditions including rain, actual snow falling and night driving. It doesn’t have a big budget level of detail but there’s enough to feel immersed, and the image quality and performance are strong.

The game’s progression is quite standard, with championships that use different classes of car and more complex layouts. There’s also an addictive grindy element where you earn money to upgrade your car or buy new cars. Be careful upgrading something too far though, or your B class car will turn into an A class car and become unusable. Luckily you can go back on upgrades and equip anything you like. It’s a pretty nice system that always gives you something to buy, but doesn’t necessarily require it to progress. You have to find a good balance and compromise your setup until you get to the max class. It does take a little while to get there unfortunately… but amusingly you can still enter your B car into an S class event. Worth a try, right? You get money just for participating so why not.

Where did these other cars come from? Besides championship and single rallies, there’s other game modes that can get pretty wild. You can actually race against AI cars in Rallycross. These tracks are completely different to the standard rallies, with full circuits and multiple laps. The framerate dips a little bit more with AI on the screen but it’s a nice mode to have nonetheless, and it’s still pretty smooth even when its not at 60fps. You can actually put an FPS counter on screen, and the lowest it got for me was 42fps with all the effects on max at the start of a race. Then, when you drive away into 1st place it goes back up to 60fps. A good incentive to drive well!

What other modes do we have? There’s a couple of fun challenges thrown in for the heck of it. You have to drive through missiles, dodge oncoming traffic, avoid roadworks and collect coins! All these things you would never see in an official rally game because they are too much fun. Excuse me, coming through. 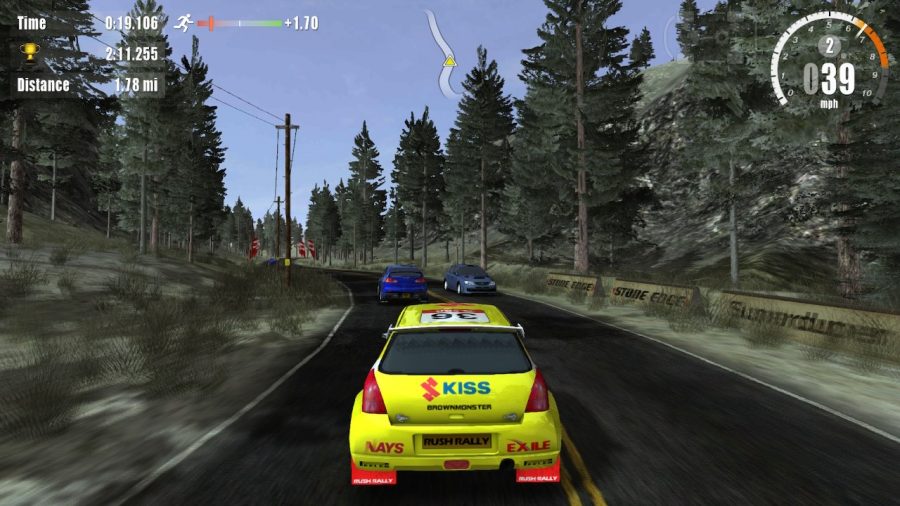 The options screen is very comprehensive. This is where the mobile origins of the game shine through for better or worse, with a slightly odd touchscreen layout on the menus. It’s a bit annoying trying to move the cursor over giant windows and having it move all over the place. You press left in some places and it’ll go up, for example. It’s not an issue in handheld mode, but the touch screen interface still remains on the TV. 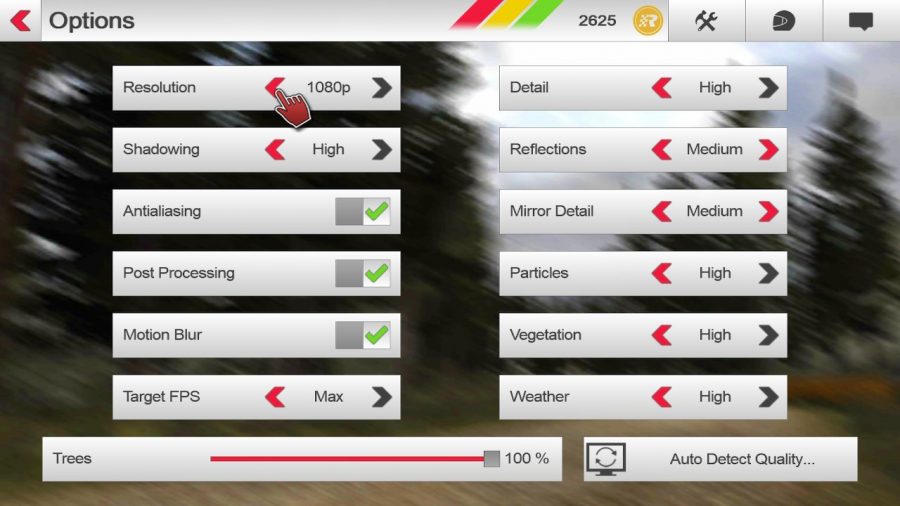 Usually this would indicate an unoptimised game, but just look at all those options. Besides the menu UI this game has been HIGHLY optimised for Switch. They’ve thrown in every possible option you can imagine, and you can do weird things like change the resolution down to 360p. Why would you? That retro feel I suppose, and to slightly stabilise the framerate. You see the effect right away with blurry menu text. Perfect for streaming with bad internet. You can also play god and adjust the amount of trees and vegetation. Put these on low if you want every location to look like modern bushfire-ravaged Australia. The game also has 6 camera views for gameplay, including cockpit and top-down view, and advanced control options in another menu including steering sensitivity and gyro.

This game is a lot of fun but of course nothing is perfect. If I had to list any negatives it would be the bland presentation and music, and complete lack of story or lore or anything remotely creative besides the punny driver names. This is so common in racing games it’s a bit unfair to criticise this one for following the playbook, especially when one guy is behind this game. You can’t be a master of every creative field. It is still a fair critique however since this is a product that costs money.

Another thing lacking is a “free play” or time trial mode for the rallies, just so you could chill with a podcast or music while playing. You have hot laps for the Rallycross but nothing for individual rallies. To replay anything you want you have to grind and unlock everything to replay in Single Rally events. Not a huge deal but this issue became apparent to me when I wanted to get a screenshot of a snow level, but none were playable without going through an hour of other tracks (I still got it, though). There’s also a very strange bug that makes the Switch Home menu and screenshot album run very slowly while this game is open. You can still take pics and vids just fine, but can’t really view them until you exit the game. I heard people report crashes when going online as well, but that never happened to me. Online is simply leaderboards with friends and worldwide, and special events. A nice way to make this game infinitely replayable.

Rush Rally 3 is a rally game with a lot going for it, but the highest accomplishment is that it’s fun to play. Taking fast turns and barely hanging onto the road, flicking the handbrake into a hairpin, admiring the scenery, challenging yourself to go slightly faster on a 3 turn than you should. The great controls and technical proficiency in performance all just enhance the sense of speed and fun. It is highly polished, accessible, fun, intense, challenging game that actually raises the bar for rally games. It’s made by one single person in Brownmonster Limited and it’s better than a lot of racing games made with large teams. This is a true work of passion. It didn’t happen overnight either, it seems to be the result of Rush Rally 1 and 2 being successful on mobile and receiving continual refinement. It’s now stretching its legs beautifully on Switch with Rush Rally 3. It can finally claim to have “console quality racing” on an actual console. There’s also more content coming to it with free cars and updates. It’s really nice to see some high quality racing games finally hitting the Switch with this and GRID Autosport. I strongly recommend this to rally fans who find the official games to be too boring or difficult, or racing fans looking for a new flavour of racing. I’ll see you on the leaderboards in my fully upgraded D class car.