I’m 12 hours into Mario & Luigi: Dream Team and the tutorial complaints have been lost in the wind somewhere. A small batcave of manchildren on the internet has been raging about how things are explained too in-depth with endless text, much to the burden of their active lifestyles. Many reviews have also docked the game for this apparent intrusion of text in an RPG. I recently finished Bowser’s Inside Story just before playing this game, and I can say for a fact that Dream Team is flowing much smoother, like a dream is supposed to. The new concepts are easy to grasp, the gameplay is more interactive and it’s a much better designed game all round. The only difference is people complain more in 2013 than 2009. 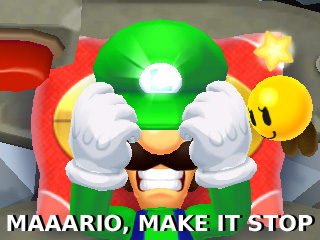 I was a bit down after the intro, because I thought there was quite a lot of text and that maybe these people were right and it was going to be a bad game. Thankfully, after the intro sequence the tutorials are practically gone, unless you’re too impatient to listen to characters talk. Expressive characters who are integral parts of the game world and make the game what it is. When you arrive at a new place the characters are going to tell you about it because THEY LIVE 100% of their existence there. I’m OK with that, the characters in this game are funny, unique, have bizzare manners and there’s some excellent facial hair to be admired. If they didn’t talk to me I would never know them.

Here’s a giant moron complaining about Pikmin 3’s tutorials, which are nonexistent. It’s a podcast bitching about the hand-holding nature of the game, which by the way this guy has no clue how to play. It’s a shame because the title “Where All The White Pikmin At?” showed great promise of intellectual discussion. 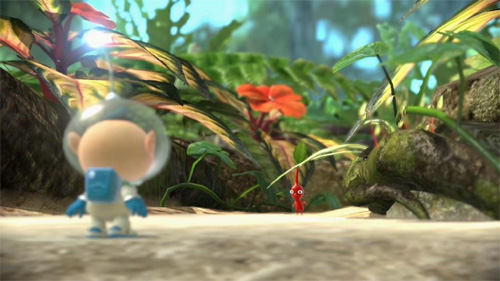 This is the “tutorial” of the game, a word I’m beginning to hate because it’s simply the introduction. You crash-land on a new planet and you’ve never seen a Pikmin before. You see a Pikmin, learn they respond to a whistle, and then you can throw them. Done. In fact it’s cool to see the reaction of the little dude, this is part of the game. You can’t just jump in and start throwing them like a pro basketball player, it would make no sense. Story mode means there will be a story, and in this game it’s a pretty fascinating one with a lot of subtle details contained in the 3 second cutscenes (and there’s a Pikmin anime on the way which I’m really excited about). If the mere existence of story makes you angry, you can do Mission Mode instead which plunges you straight in. I suppose this Mark MacDonald fellow from Giant Bomb needed a tutorial to show him that. He also complains that there’s an animation when you bring home fruit.

How else would you know it arrived back in time? This is the sole collectable in the game that is essential to your survival, it’s a nice moment of relief when you salvage some. Sometimes it’s an entire days work. The alternative would be a loading screen, because the map is changing with the fruit gone.

I didn’t intend to beat up on this guy too much, but I’m simply laying out his attitude for everyone to see because it’s a common one. Looking for problems and finding them up your arse. I love Pikmin 3 so much I’ve finished everything and put in 50 hours game time so far (all Platinum medals, hidden files, fruit, beat story mode twice) and then booted up Pikmin 1 and 2. Guess what? Their tutorials are exactly the same. In fact, Pikmin 2 takes slightly longer to get started. It came out in 2004. 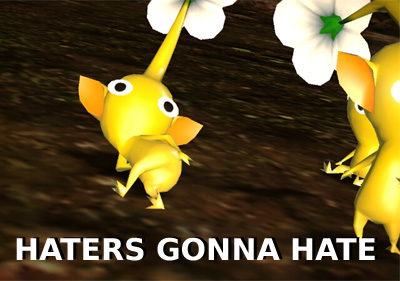 Here’s my theory on why people are making a big deal out of it all of a sudden – poor attention spans. Games have an alarming amount of “interruptions” now that we’re always playing online and getting notifications, and that’s in addition to whatever Facebook / Twitter / Mysandwich apps you have open on your phone / iPad / Laptop / Microwave on your lap. This is MUCH MORE APPARENT for game journalists who live at their desks and have 5 things beeping and flashing while they complain about a tutorial, or curse their difficult lives while watching a beautiful cutscene in DuckTales. Having to “wait” has become more difficult for their brains to approve.

Another theory is the uprising of the “Dark Souls” gamer who think they’re a hardcore expert on every game now after mastering its very basic (and easy) mechanics which ironically rely on patience more than anything else. I love Dark Souls but not for its difficulty, for its sense of wonder and exploration into the unknown (also present in Pikmin). It seems like Dark Souls is the only slightly difficult game some people have played, and I’m sick of it being used as an example. If we follow the vocabulary of the modern forum-dwelling gamer-journalist whatever-the-fuck species I’ve lost track of, a new game is either;

1) Metroidvania (has exploration, items or bars, maybe a suit)

5. Indie (got 5 million dollars from Sony to make a game) 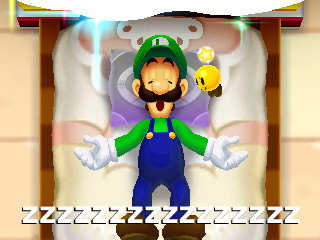 OK, I’m getting way off track and Indies are generally being treated well to their credit. My bottom line was lost somewhere in the 6th paragraph, but just as I’m losing sight of how to write articles; we’re losing track of how to enjoy games. Mario & Luigi: Dream Team is a fantastic game full of colourful, hilarious characters, interactive environments, an amazing art-style unlike anything I’ve ever seen and inspiring new music to match. If you’re going to let a few lines of text ruin that for you, then good luck finding stimulation elsewhere. Load up a porn site or open the fridge. I’d say Dream Team is the best in the series so far but it’s still early, so far it’s definitely raised the bar with its music and environments. Back to my videogame now, thanks for reading and I hope you get back to yours.

11 thoughts on “Tutorials, are you too stupid for them?”