There’s something fishy going on at the insane asylum, who would have thought? It seems there’s more to this one though. You are a journalist who has received an anonymous tip that there’s illegal activities worth recording here for a great story. You rock up in your rickety car that drives itself, and rotate the camera left and right to try and figure out what’s going on. There’s nobody at the gate to let you in. You step out of your car and walk into the front office. Not much here besides a desk and computer. It’s still on but has been logged out or idled, sitting at the login screen. Guess the guard took the day off. It’s time to take this story into your own hands. You approach the side gate on foot. Everything looks dark and grainy, but what could possibly go wrong? It seems perfectly safe to just leave the car there and walk in.

This game is so scary there’s no Easy difficulty. Outlast is a survival horror game that has a good balance of walking slowly and running away. You don’t have a weapon but you do have a video camera with zoom function and night vision. You’re going to be using this a lot because it’s a very dark game with small details to find. Using night vision however takes up batteries which you can find lying around and replace. I enjoyed this simple management element because sometimes I got really low, but never completely ran out of batteries for the entire game. It adds a little bit of urgency. If you’re low you can do a bit more snooping in optional rooms to find batteries lying around. They are almost always lying next to something like a radio for authenticity.

The game is viewed entirely in first-person but the controls are a little stiff. It’s not quite Turok or Quake where you’re bunny hopping around diagonally, more on the slow side like an adventure game. You have the ability to peek left and right behind you while running and it feels pretty cool like you’re turning your neck around. It feels a bit like a third-person game zoomed in, kinda like when you force Zelda or GTA to be in first person and see some weird camera stuff every now and then. It works for the purpose of this game because you are mostly looking around and the movement isn’t too important. You’re going to need to run but you’re just a journalist holding a camera so it makes sense that you’re not an athlete.

At first I braced myself for this to be a repetitive running game with no gameplay variety whatsoever, but to their credit the encounters are designed very differently and very well. Sometimes you have to hit multiple switches or collect things so you can escape and it involves a bit of strategic planning. The game is also the perfect length for this kind of gameplay. It’s probably 6 hours total and I finished it in three different play sessions, it’s very engaging. A huge amount of the game is poorly lit though so it relies heavily on night vision. I thought it was a bit overdone, but maybe if you play in shorter bursts it would be fine. It made my eyes feel a bit weird and constantly turning night vision on and off through cracks of light to save battery is jarring.

The plot starts fairly innocent but moves heavily towards the deranged side when things kick off. There are a lot of messed up things in this asylum and very quickly it goes beyond human horror to grotesque monsters and hints towards the supernatural. Is it really though? I’m not going to spoil that. Everything here is so messed up it’s hard to tell what is human and what isn’t, or what they used to be. 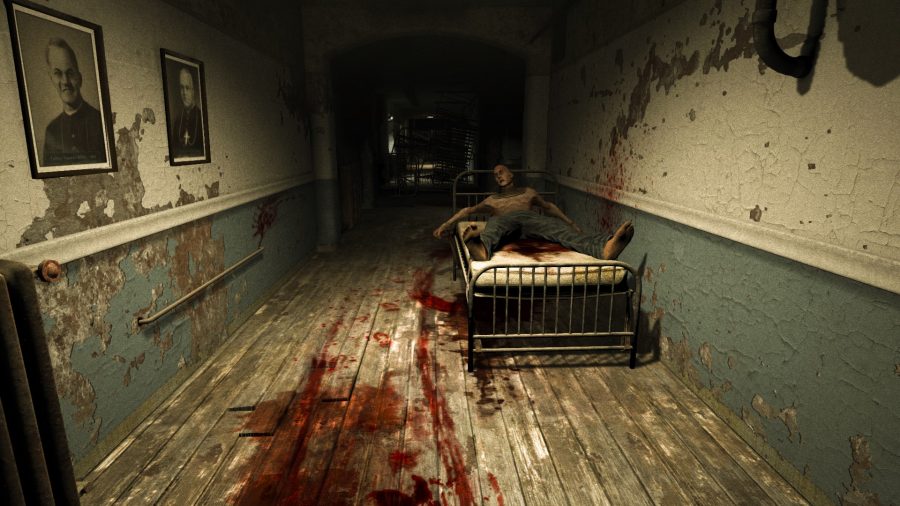 The story is told in a few different ways, the first obvious one is by peeking around and looking at all the weird stuff. The second is through documents you can pick up and read, detailing events in the asylum and patient info. Nothing like a good document in a horror game to give yourself a breather. In Outlast you can read patient files and it’s quite morbid seeing death explained in such a sanitary way. I found the writing mostly good with perhaps an over-reliance on swearing, as the f word keeps coming up inelegantly. At first I thought it was just how the journalist spoke which is fine. Then the crazy people say “fuck you” which I guess is what crazy people say. Then some random scientist says it in his notes, and it wears a bit thin. Probably not a big deal to most people but I felt like I was seeing the writer behind the game and that drew me out a bit. You need to give different characters a different vocabulary. I suppose fuck is the perfect word for this game, but it’s a little overused.

The last storytelling element I found to be a bit too obscure sometimes. Your character has his own “thoughts” when you raise the video camera, and he quickly scribbles them down in his journal for you to read. The problem is that it’s very easy to miss stuff if you don’t have the camera out 24/7 and it’s not always apparent when your character is having a brain fart. You can shine the camera on an incredibly messed up corpse hanging from a chair and get nothing, while he’ll show extreme interest in a few jumbled letters on the wall. It makes sense that you’re a journalist trying to record stuff, but the fact that you need your camera up at all times means you’re probably gonna miss some of this story since you need to preserve battery. Just two gameplay elements that didn’t gel together for me. It also kills the mood a little bit because when I’m running from a psycho I don’t wanna be thinking about missed collectibles. Plenty of time for writing later my friend if you can stay alive.

Hufffffphewww. Must be quiet… no breathing. He stopped, did he see me? I’m shrouded in full darkness but through my own camera I feel naked and exposed. He’s only seeing darkness… surely. I can’t even imagine what’s going on in his head let alone eyes. Can he smell me? What even is this thing again? Ok… he’s walking away. I think I’ll just sit here for a bit anyway and form a plan. Let’s see, he followed me through 3 corners and will hopefully walk all the way back. I can peek around the first after a bit of time. Then go right instead of left.

Outlast’s gameplay of trial and error hide and seek would be bad in any other game, but survival horror makes it work. It’s realistic in a way, because if you imagine yourself being chased by a psycho in an asylum you don’t have many options. You don’t know if a door is going to open or not, so you can stop and try it at your own risk. Nope the door’s locked, you’re dead. You don’t know which crazy person is gonna attack and which isn’t, but if your life’s at stake you keep a distance. This is a game you play slowly when you can, and run like crazy when you need to. Outlast succeeds in keeping tension high for the entire game and forces you to be aware of your surroundings as if you were actually there. It made me feel like the weakest creature imaginable, a human being.

If you don’t see me again… well, the world needs to know that Outlast is a great game. Fuck.