I’m doing a 3 hour challenge in Forza Motorsport 7 that involves driving 69 laps of Spa–Francorchamps, a famous circuit in Belgium. There will be 24 cars competing but it’s just the game’s AI, and the hardest part won’t be racing them, but simply completing it. Driving lap after lap for 3 hours is quite mentally demanding, especially keeping consistent lap-times and enough mental focus to not drive off the track. So I’m just going to document the process in a writeup to give a little insight into what it’s like. Some people might have seen this achievement in the game and you’re wondering, “is it worth it?”. I’m going to say yes because I’ve done endurance races before and found them very rewarding and invigorating. It’s definitely not easy though.

The first part of this mini-journey is preparation, the how and the why. You need a good reason to do this because it’s a time-sink. For me, I want to train myself to be more patient and focused, distract my mind a little bit, and also try and get better at this particular track, Spa. It’s one of the best tracks in the world and I don’t think I could drive for 3 hours on a bad track, so this works out. Next you look at the how, what options are you toggling and how ready are you physically? Difficulty and assists can be set however you like. I don’t want to be overly stressed so it’s not on the hardest difficulty, but I also don’t want to get bored and breeze past everyone so I put the AI difficulty to average. Now make sure you’ve got the next few hours free, I’m doing this at night when not much is happening. Also make sure you’ve eaten in the last few hours and have a lot of water within drinking distance. 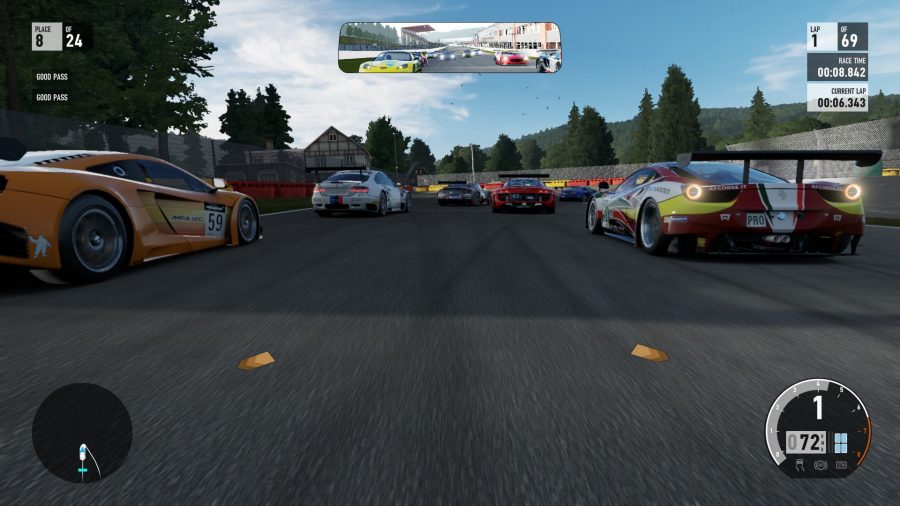 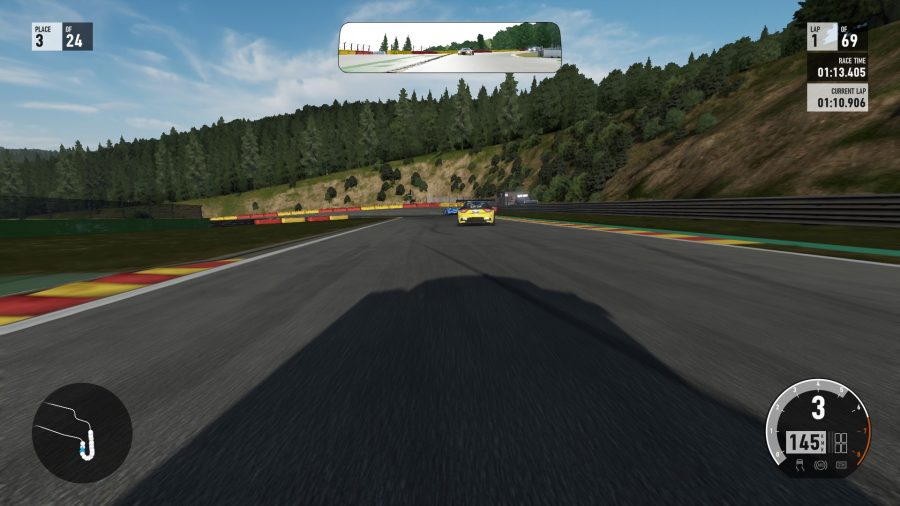 Already up to 3rd place halfway through the lap, I should slow down now and get used to the car. It feels quite heavy but turns smoothly and everything feels under control. I test the braking a little bit and wobble about and it doesn’t lose any grip. Very nice. I cycle through the camera options and decide the first-person is still the best for this car. Everything’s feeling comfy now and I can go back to being aggressive to take the lead. 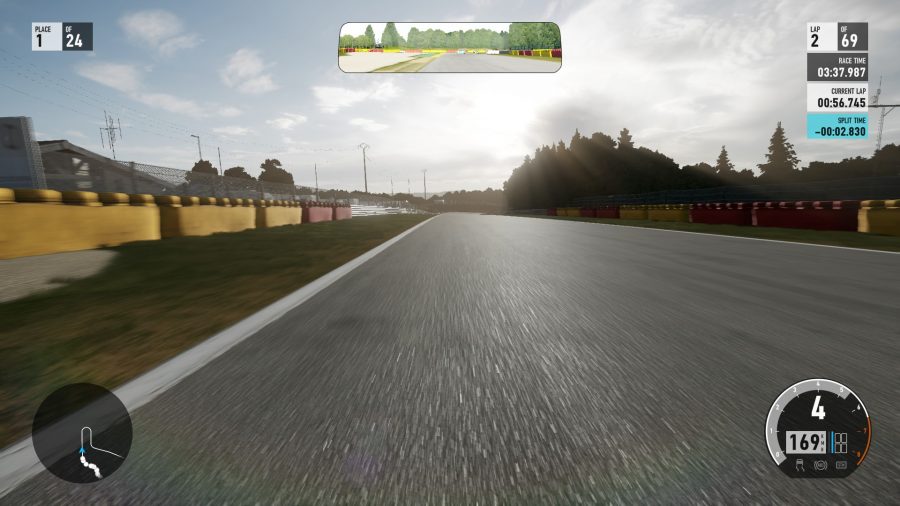 Well that was easy. I did not put the difficulty high enough because the race already seems mine for the taking. I could restart but honestly I’m not too worried about this and don’t care about the AI much at all, I’m doing this for myself. Time to focus and nail down some good lap-times. 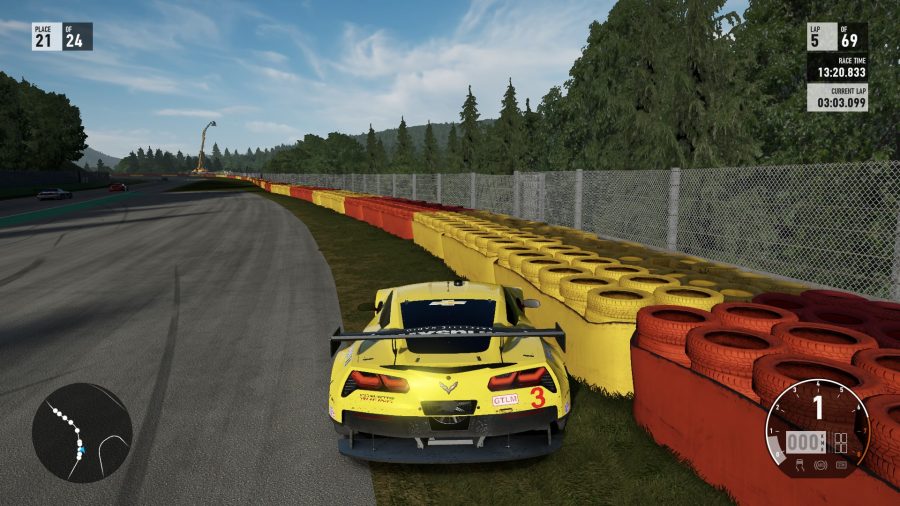 Your batteries are low flashed on the screen. Oops. I was not as prepared as I thought. Xbox One batteries last about 60 hours and I forget about them most of the time. I pulled over the side of the road and changed the batteries to make this feel like an authentic pitstop. I have some more batteries ready to go since I cycle them with two others, but it still requires some fumbling about. Now I’m in almost last place with some catching up to do. Luckily I know I have a fast car and pace on the rest of the field. This could be interesting and now I’m glad the difficulty wasn’t super high or this would be over.

Well I’m back to 1st place again and feel good about all the passes I made, after taking J.Davis in the #14 Jaguar quite easily in Turn 1 for the lead. Knowing I have speed I did them slowly and patiently and got through without any crashes. I wasn’t feeling as safe as before though. If I lost batteries or the phone rang or something happened, I needed a big gap. Suddenly there were more things on my mind after the battery issue and I had a bigger perspective of the race. Time to really push myself and build a strong gap. This will be fun. 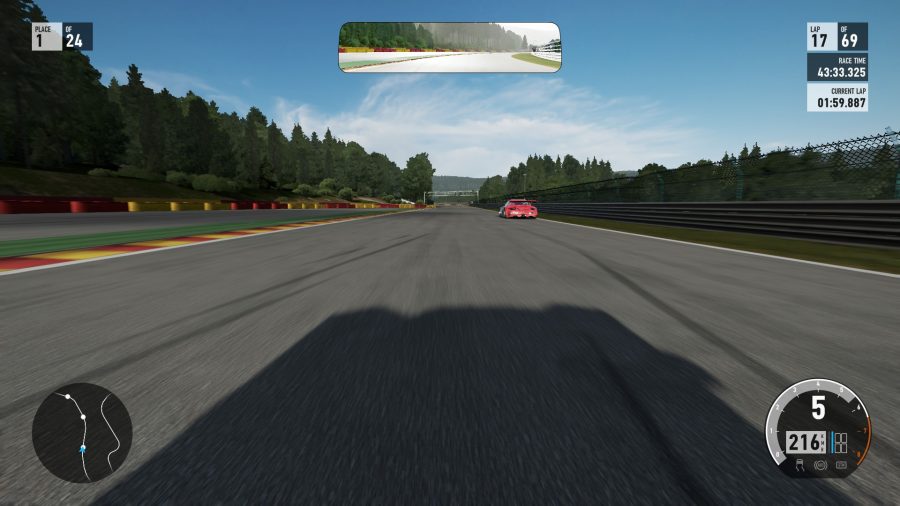 About to lap some cars for the first time. Might seem a bit early but with 24 cars on track some of them are bound to be having a bad race. It’s just slow AI in reality, but I like to imagine them as racers to make it more fun. After quite a few laps on my own I was happy to have something new to focus on now with a couple of other cars to think about.

Things were starting to drag a bit. I was still building a lead but my laptimes were stagnating and I was down pretty consistently each sector by a few tenths. My mind was wandering, is this really a good use of time? What else could I be doing? I want to play all these other games. I want to do other writeups. Is this writeup even going to be good? Is that a man standing in the bushes? Will these screenshots save properly? Do I even need screenshots for this? What Splatoon rotation is on? Should I zone out even more with some music? It was feeling like a grind when… SCREECH!

Suddenly a car spun in front and woke me up real quick. PHEW! I very almost crashed into it but luckily it was slightly off the racing line. A bit of a scare though. Hopefully the driver in the other car is alright. That made me realise I was starting to get lazy with my laptimes and the last 10 or so laps were a bit of a blur. I had to refocus because I wasn’t even halfway through yet. Focusing was the whole point of this. 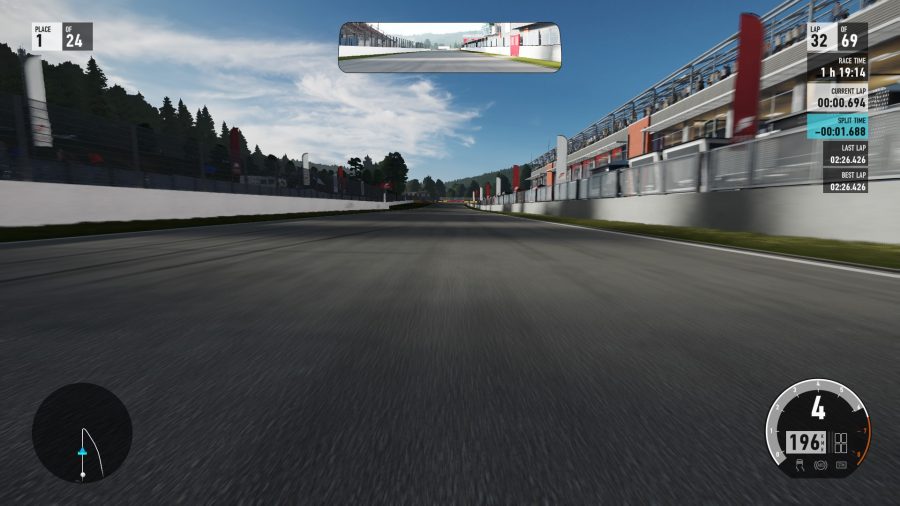 This was my fastest lap of the race by 1.6 seconds, wow. I was slowly learning about each corner and the car’s strengths but hadn’t strung a lap this good together until I refocused. This was the kick I needed to keep enjoying the rest of this race I think, as I nailed down and tried to match or beat this laptime for the rest of the race. I had lapped so many cars at this point I lost all reference for where 2nd place was. I just knew I had a huge lead and that I was hungry to finish now.

VROOOOM!! Another fastest lap finally, taking off a huge 1.3 seconds. 11 laps to go! The second half of this race is just flying by as I’m in the zone. I forgot about the writeup and screenshots. There’s been lots of traffic with lapped cars and I couldn’t set my best possible lap until I just got some clear road just now, and it feels amazing. I’m flying home now pushing as hard as I can.

I’ve been getting very close to setting another fastest lap and wanted to try extra hard and take some risks on the last lap, but unfortunately there was a lot of traffic in front of me. I tried anyway but lost about a second overtaking one of them. But it didn’t matter anymore, I was about to be home free. I had just a few corners to go and felt immense relief along with fatigue. My trigger finger was starting to hurt actually and I was perhaps getting slower from fatigue so I’m still pretty happy I set a fastest lap on 58 and pushed myself pretty hard. Here we go, final corner! 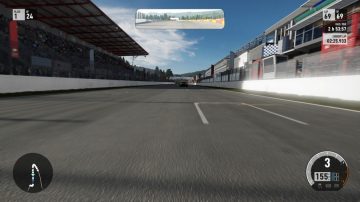 BOOYAH! It ended up being less than 3 hours too at 2 hours 54 minutes. Was it worth it? Definitely as I already decided in the beginning. I feel like it got easier in the second half somehow. I just stopped thinking about everything else but driving. I thought this might sour me on the game for a while, but I honestly want to keep playing because I feel like I found some laptime in the last 10 laps and have a bit more up my sleeve. Oh yeah, and I got the 50g achievement out of it. I forgot that was even a thing but I admit it was quite nice to hear the achievement sound effect for something that was actually a legit challenge. Hope this was worth reading and good luck to anyone trying this or the other Endurance races. There are much longer ones out there if you have a look at Project CARS, but 3 hours hits the sweet spot for me without compromising health. Stay sharp and stay fresh.