I arrived at the bandit hideout as ready as I could be. My rifle was custom made by Dahl with an extra fire element specifically made to burn flesh. The rifle burns through 2 bullets per shot as a consequence, so I loaded up on ammo at the vending machine beforehand. I knew there would be tons of human freaks here. This world was now full of mutant spiders and hungry beasts, but humans were still the worst thing to encounter. It was technology that made us the most dangerous and stupid at the same time. What a combination. Anyway, my goal was simply to purge this place on a mission from Sanctuary. How did these guys become bandits anyway, it’s hard to believe it’s a choice. They have no cause. All they do is run around and die really. We could be rebuilding but we’re just tearing each other apart. I guess I’m not doing this by choice either, oh well.

I heard some rabid laughter and knew there were some bandits in the next room. Yep, sure enough there were two of them kicking a hunk of metal. I ran in and killed both for a measly 1 XP each. What a waste. I knew I had no hope of growth from simple odd jobs though, it was more about survival. Sanctuary was the only place left that resembled a community, and I had to keep it safe. I was also racking up “badass” points just by existing really. Every shot fired and movement I made was adding up, as if someone was watching and tracking me. Oh well, at least it was useful.

This room was full of lockers and containers I could loot. They’re all conveniently marked with the same green glow so I know exactly where to brainlessly hold the analog stick towards. I mean, move my legs towards. Click click click, I got some of my ammo back and some money. All these sounds were satisfying enough that I didn’t care what I found to be quite honest. I just enjoyed looting. There was a pistol in one but I left it there, it had a bad accuracy stat which pains me to use. Imagine aiming the reticule perfectly at one of those sick freaks, and it still misses. Makes it feel like one of those ancient online videogames with lag. Don’t need that “feature” in single player, I mean my life. I held onto my 97% accuracy pistol for dear life, even though the damage value was low. The critical hits I could nail with it made it better than it seemed on paper. I had put my Badass points into accuracy for this reason.

The two bandits I just killed were dismantling some robot, whose parts now lay scattered on the floor. That’s probably too generous a word, “dismantling”, they were fucking it up for their own amusement. Bunch of savages. I heard a noise and looked closer at the core. To my surprise it was still alive, and started talking. It asked me to take it to a new body outside the hideout to give it a second chance of life. What a sweet little robot. I didn’t know anything about this robot but liked the idea, and there was a fat 2000 XP attached to it as well. I took on the mission, but I had to finish the current one first. Hop in my backpack for now, buddy. 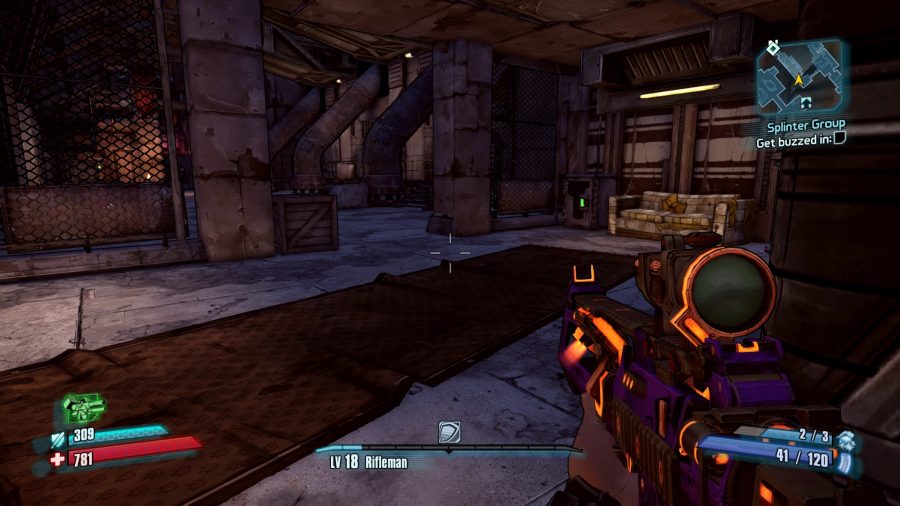 A whole group of bandits were living around the corner and the next room stank like a combination of shit, piss and vomit. How do these bandits even live together, I can’t imagine. They probably have no sense of smell left, or any kind of feelings for that matter. They’ve all convinced themselves they need to kill everything in sight to survive, like there’s no other option. Some of them blow themselves up for fun, and they even use each other as shields. It’s a scary thing to deal with, but their weakness was that they were predictable. They always ran towards the fight with no fear, and even my turret gun was enough to make them come running.

One of them saw me and it was time for some mindless killing of my own. I threw my turret down to help out. This thing does an amazing job not just with damage, but luring them out into the open. I mowed a few down with my assault rifle, and didn’t quite finish one but they caught on fire. As I was reloading the fire finished them off. They lit up so easily as if they had been drinking petrol. Wouldn’t surprise me. Why else would there be explosive barrels around?

A few more came running out from the next room. As they rushed towards me they were screaming weird things like “based Sakurai” and “Animal Crossing or riot”. I had no idea what they were talking about but it seemed like they had decided to riot regardless. I picked off the last few with a slight feeling of sympathy. I was hoping this would be a quick job because the stench of this place was taking its toll. I quickly looted some lockers for a few bucks and carried on.

After clearing the room I dropped down into a sewer. The smell here was an upgrade from the bandit rooms, like a giant toilet instead of a big open arsehole. I climbed a ladder up to another room with the usual Hyperion propaganda on the walls. The same old posters I had seen everywhere, telling us to give up on life with eerie subtlety. There was even graffiti of “Marcus Gunbringer” with his face drawn in red. Marcus was just a slimy businessman who had a full monopoly of weapons in the region, but I guess the bandits worshiped him as a means to bring destruction. It was very easy to sell any kind of gun with all this madness about. Makes you wonder who even drew these, when the bandits are too stupid to even walk straight, let alone read or make art.

I made my way to an open room with a table and chairs conveniently placed in the middle. Where is everyone? Oh right, this was the central part of my mission.

I had a pizza ready to set down for the purpose of luring more of these bandits out. The pizza had become moldy and stale in my bag, but that would just be extra flavour for these lowlifes. I dropped in on the table and immediately heard heavy breathing come out of the pipe on the left. “Rahahahaha!” one jumped at me with a high pitched scream.

Oof. All I could do was fight back with a melee attack, but he took away a good chunk of my health. I unloaded my gun to finish him off as more jumped out of the pipes. They must really want some pizza, but why they still felt the need to kill me was beyond my understanding. What if we all just sat down and ate it together, wouldn’t that be wonderful? There’s four chairs here guys. Nope, they kept lunging at me so I dropped a grenade and ran. Two of them died and I finished the last one off with my gun. Piece of cake, or pizza I should say. It was tempting to have a bite on my way out, but one sniff of it quickly changed my mind. I didn’t want to become one of them. As my shield and health slowly regenerated, my mind became focused again.

I was so done with this job. This whole mission through the bandit base had left me covered in shit and now Tanner wanted me to come back to her with details. She can wait, because now I have a robot to restore. After picking up the AI core I felt this responsibility, almost as if I had an objective marker in my mind and a checklist in my pocket. I still had to clear the bandit hideout fully because I hadn’t been everywhere yet. There was another exit, closer to where the robot body would be for my other quest. It was all too much to do in one day. I scoured every room I could and got rid of some stray bandits until I was satisfied this place was safe. 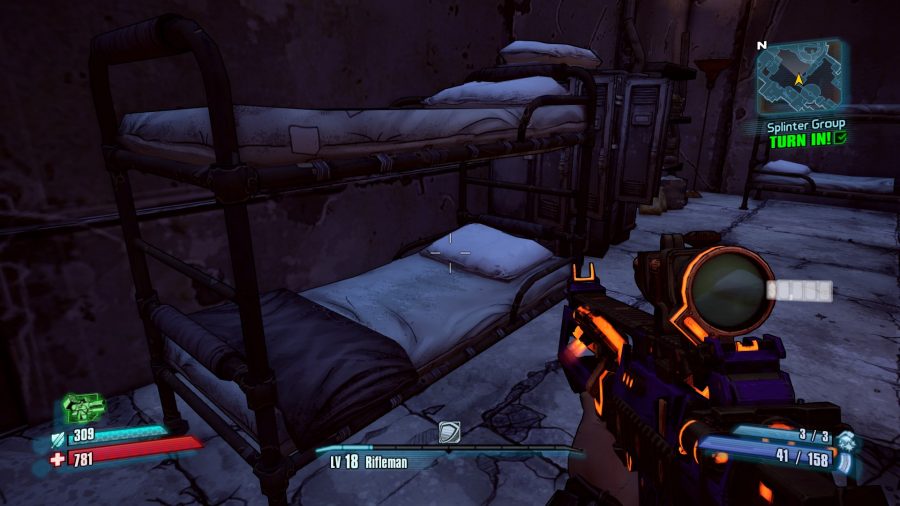 Ah, time to rest up. I finally found a room without dead bodies, with 4 beds to choose from no less. This must be what heaven is like. They all had disgusting stains on them but at least they were hard and firm, good for my back. I tucked myself into the bottom one with a nice comfy blanket, threw my turret on the ground and drifted off to sleep. There were still things on my mind, like returning to Sanctuary and finishing the robot quest, but that was what I needed. That feeling that there’s always more content, I mean experiences. I knew what I had to do tomorrow and through all the shit and stench, that gave me a reason to wake up.