Slightly Mad Studios should be renamed Completely Batshit Studios, because based on this game they are a bunch of sadistic wankers. After Shift Unleashed I thought they’d be able to make a better game without EA. While the menus are much cleaner, this game’s structure has completely gone down the shitter.

Test Drive: Ferrari Racing Legends is the perfect example of why racing simulators are DEAD. They’ve become inaccessible to the point of arrogance, and evidently nobody is willing to spend hours mastering a single mission just to unlock a car on the back of the box. This is yet another game that forces a career mode on you (with 200 missions) and locks cars and tracks until you’ve progressed through the campaign. A game with TEST DRIVE in the title let’s you test nothing but a dick in the arse. The most exciting thing about this game (to me) is the Formula 1 cars. Let’s face it, despite their prestigious sports cars and history, F1 is what Ferrari are most known for. Those cars are FAST, have tons of downforce and look amazing. The problem is I’m sitting here right now with average cars doing laptimes of 2 minutes 30 seconds for hours and not having fun.

Check out the amazon reviews for it, some poor bloke can’t even beat the first mission on easy (it involves starting in last place and you have to pass 6 spread-out cars in 3 laps without putting a wheel off the track). A father talks about his autistic son crying in stress because he can’t do anything about the locked content. Another reviewer brings up anger issues, while one hits the whiskey in an attempt to drown out the buyer’s regret blues. It’s downright depressing when the few people who DID buy the game absolutely hated it. 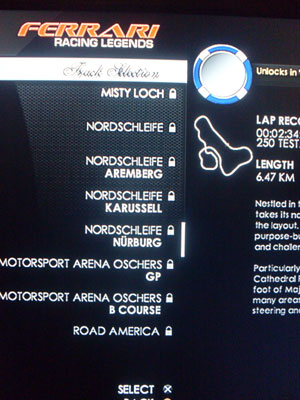 It breaks my heart because this game’s physics are actually an improvement on Shift Unleashed, and the sense of speed is very good even in the average cars. The cars slide a bit too much to call it realistic, but it’s very satisfying hanging onto them. The cars wobble around and you can really feel the edge of grip on the track surface. The track selection is also wonderful (even what I’ve played so far, which is less than half) and it’s a very fun game to play when it lets you play it. Misty Loch is a brand new track and it’s magically over the top, with bridges and trees showering the track with a gorgeous backdrop. I’ve already won races there in campaign mode but it still hasn’t been unlocked for some reason.

To get to the first modern F1 car (my happy place) I have to complete 84 missions in the Modern Era category. These include 10 lap races with tyre damage that doesn’t make sense, curbs that can glitch and flip you upside down, and AI opponents that can just randomly break down and park in the middle of the track. Even the announcer is unbalanced, intimidating you with quotes like “you’re driving too slow!” and “the one on the RIGHT is the accelerator!“. I should go easy on the guy, it must be a horrible life showing up to every demo event, time trial and quick race ever held on a whim. If I leave the game on for days without touching the wheel he’d probably start screaming.

All this pain could be undone with a simple mouse click at Slightly Mad Studios. If you’re going to FORCE a campaign mode on everybody, make it fun or nobody will play your game at all. That’s exactly what has happened here. If people do want to challenge themselves there’s time trial and online racing for that which I greatly enjoy. If Project CARS follows the same design structure as Test Drive: Ferrari Racing Legends, there’s going to be a lot of banned posts in the Miiverse.

Racing developers, stop sabotaging your games and let us enjoy what we’ve paid for. I’ll get through Ferrari Racing Legends “job mode” eventually, but most people won’t. Every car racing simulation game is bombing, even arcade racers are bombing and this is why. Bloated career modes, an onslaught of trophies and achievements, multiple online accounts, locked content, mandatory installs, DLC, cutscenes, leveling up. It’s a complete fucking mess and driving more consumers away every year.

Are racing games dead? As Mario Kart Wii sells its 34 millionth copy, I would have to say no. Racing developers are dead.