Shadow Dragon is a remake of the very first Fire Emblem game and I’ve just played through it on the Virtual Console. That’s right, from the NES, to the DS, to the Wii U, this game has had a journey of its own. Being the first time one of the earlier Fire Emblem games has been released in English, this game presents classic gameplay with the original story of Marth and the kingdom of Altea. It has quite a simplistic gameplay-first approach without many bells and whistles, but the gameplay is very good and I absolutely fell in love with the design of the game. 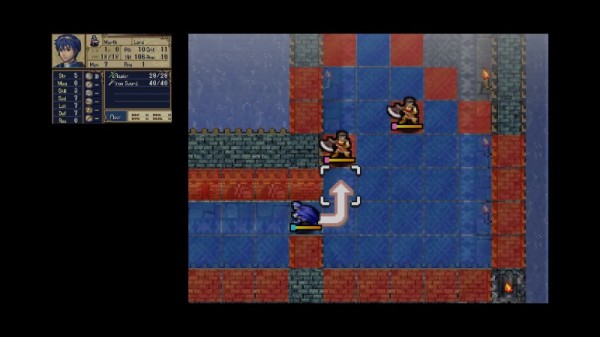 Being a DS game, there are a ton of screen options and I wasn’t sure if any of them would be ideal. I wanted the grid to be as big as possible on the TV, because this is the gameplay I spend 90% of the time looking at. However, being the bottom screen of the DS meant I couldn’t do that. The pic shown above was what I tried in the first Prologue chapter. It was great to see the gameplay, but when story and dialogue start going in that little box it’s hard to read. I ended up trying everything and settling on the FULL dual screen setup, with the entire top screen blown up on the TV, and the bottom screen taking up the entire GamePad. This was a bit mindblowing and confusing at first, but after doing the remainder of the Prologue maps I was loving it.

With both screens blown up to max size, it was like a console Fire Emblem, now with an extra screen in my hand I could move around. I felt like a tactician holding a map and drawing lines on it. After initiating a battle I would look up at the TV for the glorious animation that dealt the damage. What I thought might be an awkward game to play on my TV, actually turned out to create a new exciting feeling, like I was planning a route and then looking ahead to see a battle unfold. When you’re in a shop you also get a big picture of the shopkeeper on the TV, with the item list in your hand like a menu. This shit sounds small but it impressed me a lot, and completely by accident this game captured me into its world. 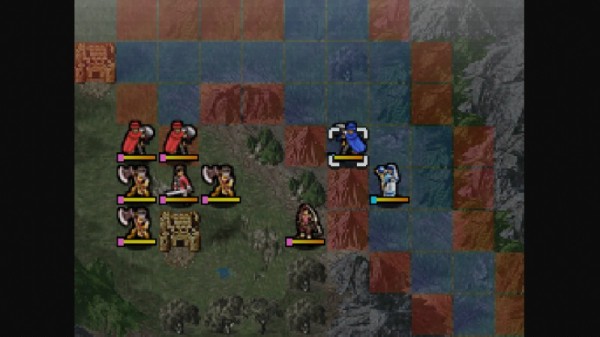 The gameplay is classic Fire Emblem without an attempt to change the art style, simply enhance it on Nintendo DS. I’ve never played the first game on NES since it never came out of Japan, but I will take a guess and say it didn’t feature dual screens or rich gravelly mountains. The graphics have that vintage feel with an attempt at realism in the maps that actually made me nostalgic for some old PC games I’d played as a kid (one specifically named Birthright which I loved). I immediately felt familiar with the Fire Emblem gameplay, with the same grid based movement, weapon triangle and general menu navigation. Yet even with the same basic gameplay structure, the game felt entirely different and fresh because of the graphical style and the way I was playing it on Wii U.

The maps are somehow BIGGER than any Fire Emblem I’ve played (Fire Emblem 7, Sacred Stones and Awakening), and troops have larger movement options to be able to traverse it. When I first saw that basic cavalry had NINE squares of movement I got pretty excited; it was seven in the other games. It gives the game a huge sense of scale, and makes movement differences between units more notable. I fucking loved Pegasus units in this game because they had 10 movement and could soar over mountains. Increase their movement even further with the Boots, and you’re laughing.

The story is more basic than the GBA games and significantly more straight-forward than Awakening. There’s less variety in the backgrounds, less relationship drama, very clear goals, and just less text overall. I actually found that refreshing, it has this innocent feeling to it compared to other Fire Emblems. People will just randomly show up and offer help, and Marth is like “ok then, you seem like a good person“. He just fucken knows. I really like Marth, he’s just a nice bloke with a good perspective on things. He thinks the world is beautiful and questions all sorts of fighting. He talks about allies and enemies in the same way, as people. Quite often he says nothing at all, but you can just tell he’s thinking deeply about strategy. Marth is beautiful. 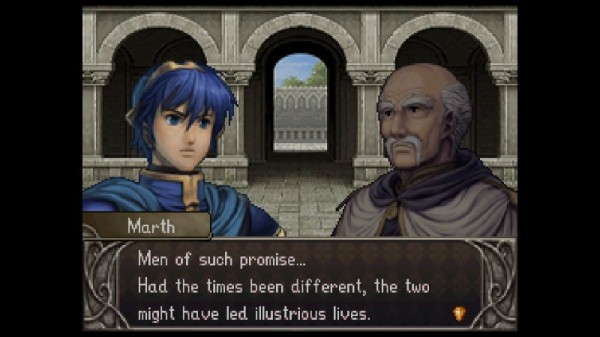 The gameplay is where a lot of my thoughts about the story came from. It pushes a lot of boundaries in Fire Emblem’s game design and I did not know what to do at times. There are some enemies that do not attack you, for example. You can’t recruit them either, so they just stand there. The lustful gamer will see them as free EXP, but what does Marth think? What if we see them again in a future chapter?

There’s a choice you have to make very early on that is unlike anything I’ve ever seen. I wont say exactly what it is, but I spent a good 10 minutes just staring at the screen in deep thought. Throughout the entire game I was surprised by the liberties they took with the gameplay scenarios. Sometimes you’ll find friends with no weapons, and you have to give them something. Sometimes you’ll find somebody locked up with no story context, and have the option to kill them. Sometimes enemies will not be who they seem, and some will try and get you to do stupid things. The characters have their own mannerisms in gameplay and I’ve never seen it done this well before. I got into the habit of scouting every troop on the field. Rather than checking to see if an enemy has a ridiculous skill like instant-death Counter in Awakening, you’ve got to think about them as people. That to me, is Fire Emblem.

The music made me SO HAPPY, coming from Awakening. The musical style from the GBA games is back, with a lot of hype going into battles, during menus, in story cutscenes, fucking everywhere. It’s a very high energy soundtrack with 63 songs, which is probably more than the NES game. The songs have a lot going on at once, with bass-lines and harmonies going crazy. I’d put some of the gameplay tracks as my favourite Fire Emblem tunes ever, like this one. The whole Shadow Dragon OST is there on Youtube, but I wouldn’t recommend listening to any of these songs if you plan on playing the game. It feels so good when they come out of nowhere, and suddenly your troops are on the field looking at each other, nodding. They all know shit is getting real. Like Sacred Stones, the music keeps changing as the intensity in the story goes up. It made me tear through the final chapters with purpose and passion, and THAT is how I like my Fire Emblem music. 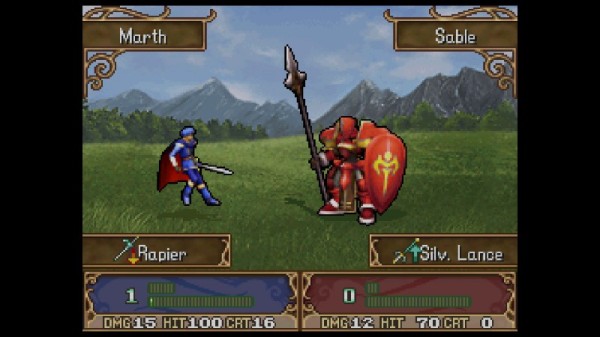 The difficulty involved a lot of strategy and a bit of trolling, but I’ve come to expect it from every Fire Emblem at this point. There was one map with basically a 30 percent chance of death at any moment (unless you were SUPER defensive for a dozen turns) but I was so entertained by it, I couldn’t even get mad. It was basically a huge map with just a few units scattered around, but the units were a ridiculous ballistae type that can shoot 10 to 15 squares away. I had only 3 troops who could reliably get in there, to get close enough to take them out before dying. It was surprisingly fun figuring out a route that worked even though I had to restart a lot.

I was also pleased to find out this game had barely any enemy reinforcement trolls. A few spawned on forts but they are incredibly easy to take out, since they don’t attack on the same turn (on Normal, anyway). The campaign got hard in the final chapters but all the difficulty felt like it was by design so I never got discouraged. Playing on Normal was probably a big reason why it felt fair. The game hilariously states that Hard mode is FIVE TIMES HARDER, so I just said nope right from the start. This is the kind of honesty I would have liked in Awakening. 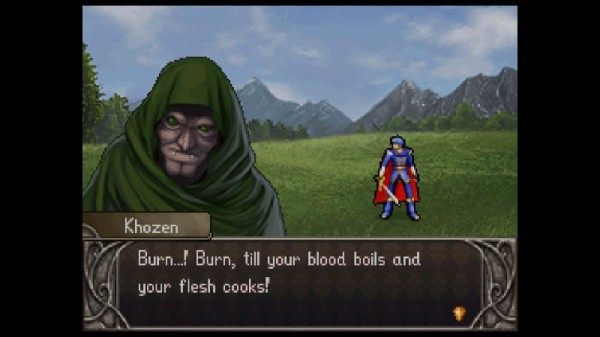 I went in with low expectations but was VERY impressed and delighted with Shadow Dragon. It’s not bare-bones Fire Emblem at all, but CLASSIC Fire Emblem with a lot of interesting gameplay scenarios, gigantic maps with interesting layouts, and a short but significant storyline. I did miss a few modern features from Awakening, like zooming out of the map, and the rescue feature from the other games, but Shadow Dragon makes up for it with its own quirks. It has some items I haven’t seen before (one is HUGE, but also a late game spoiler) and enemy behavior that makes you think. The vintage look and basic presentation might make it look a bit dull from the outside, but if you like Fire Emblem gameplay then Shadow Dragon is a lot of fun. It re-assured me that I really DO like Fire Emblem gameplay.