Skip to content
Khushrenada Not Games, Unlikely Partnerships, Whatever 2018/10/31 6 Minutes

You know Pietriots, just when I think this site could get more desperate, you go and do a thing like this…

But I jest. Pietriots doesn’t need redeeming. It just needs more content, am I right? Realizing this fact is why Sir Lord Charles reached out to me to offer me a seat at the Kids Round Table of the Pietriots. What better way to celebrate the 9th anniversary (or so) of this site then adding a 10th member? Now, I realize there may be many readers and visitors of this fine establishment who may be unaware of who I am or why I’d be brought aboard since it isn’t like I was much of a prolific commenter here for any who might have recognized me from the comment section. Well, let’s just say I have a reputation for providing content for the internet…

Since more content was needed, Charles figured he might as well just bring on someone who was already overly verbose and pointlessly typing 10 page essays every day in obscurity for free and make this site the beneficiary of that questionable content. It was the “for free” part that he really seemed to emphasize and promote when making his pitch to me. Plus, like Matto, I’m Canadian and that is the country which brings in the second most amount of traffic to this site so why not add a second Canadian to help represent that fact? But unlike Matto, who’s a bit more outspoken, I fall more into the polite Canadian stereotype so might as well try and see if that will help further increase the appeal of this site.

But in truth, I’ve known a few of the Pietriots from before this site began on another site on the internet. I’m not sure if I should mention it since they did leave it for various reasons and at times did seem to show a bit of disdain towards it in comments they made in the articles or in the comments here. Plus, it could mean that the readers here might check out that site and start digging up some of my ridiculous postings there and the last thing I need is to be let go from another job because of people bringing up my past writings. (Losing my gig at Disney this year was bad enough.) However, it does seem like some healing has begun with some of the members here engaging in that site’s community recently so for one time only I shall name the site that shall not be named which is Nintendo World Report aka PlanetGameCube. I’m sure everything will be fine. It’s only when you say that name three times in a row that any serious trouble actually occurs.

It was from that site that I first came upon Roland, Deguello, Pro Daisy, Infernal Monkey and Bill. These 5 Pietriot members, whose personalities and involvement in that community, were a big part in why I was drawn to it and joined it. Back then, I was more of a serious commenter while they were engaged in that site and they were more playful in their comments. I did try to join the fun at times but I fear I was still young and learning my voice through the written word and may have crossed the line from over eager into douchey at times with my attempts at humor. Ironically, it was after they left that I lightened up a lot from my serious postings and became a more improved writer and a much better comedic source on that site. However, I was motivated to follow the example they had set and carry that spirit forward which helped fuel the transformation I did make over the years there. Thus, I appreciate that history has sort of repeated itself here in that I, once again, will be trying to follow the path and spirit they have created on this site and hope to help carry it on into the future for other users and future contributors to further benefit from. Although, I do fear that history will also repeat itself with regards to my postings which will probably be of a more serious nature at first before some humor does start to kick in.

While I was disappointed when these ones did leave that community, I was glad that they came together for this site so that I still had a place to get their opinions and views on various video game topics. This was the time before Twitter and it wasn’t that easy to follow someone if they disappeared from a website. (Although, I don’t use Twitter now that it exists so I’m just glad it wasn’t option at all back then.) This also introduced me to some new people who had not been around on that other site which would be Charles, Mike, Matto and Grubdog. It is the latter member I want to single out.

If every cloud has a silver lining then having those 5 Pietriot members leave that first site to create this one and thus introduce me to Grubdog and his writings were and are that silver lining. Over time, Grubdog became to me the heart of this site and main reason why I kept coming. Not to take away from the rest of members here or diminish them in any way but Grubdog’s writing was (and still is) exciting to me and could sway me over to his opinion on whatever subject he chose to discuss. The truth is that video game discussions and reviews can be rather formulaic or dull. I don’t read very many of them nowadays compared to 10 years ago or even 5 years ago. Maybe that’s because Grubdog spoiled it for me with how he was able to convey the same passion he felt playing a game into the writing of that game so that the reader could experience that same emotion. It is what I wish the majority of game discussions and reviews were like today or could always be. Unfortunately, they are not but that is also because I don’t think his style is something that can be easily imitated. Otherwise I should have seen more people writing about games like him long before this site.

Grubdog is the writer whose work and reviews I most wanted to show and share with others and tried to do so. While I was disappointed that he decided to step back and scale down his writing for this site, I understand how tiring it can be creating articles. It is much easier in life to just enjoy and play a game rather than having to stop doing that in order to spend time and effort writing about the whys of a game or other gaming topics. This is why I appreciate that this site has a “contribute when you feel like” policy and not a set obligation since I know there will be times I’ll want to just play instead of collecting my thoughts for an article. Still, of all the members who have worked on this site, it is Grubdog who has most inspired and motivated me to join it even though I don’t think my contributions will be able to come close to his level nor do I think I could just flat out mimic him even if I wanted to.  As Roland explained to me with my coming aboard, “everything is our honest opinion and we’re all proudly unprofessional” which is great since I’m sure my writing will reflect that. Still, I look forward to working and developing my voice and ability in talking about games and, maybe, I might someday be at least half as good as Grubdog in my own way.

So, with that little slice and glimpse of my background and history relating to this site, I guess it is time to begin the Khushrenada Experiment Era of Pietriots. How long it shall last, who can say? Whatever the future holds, it is my aim that it will be entertaining and compelling for any who come to this site now and in the future. What do you have to say about that, Reggie? 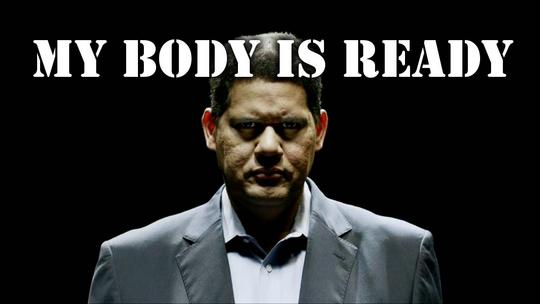 View all posts by Khushrenada

6 thoughts on “Khushrenada Hired at Pietriots Thanks to New Bribe Acceptance Policies!”