Could it be? A traditional Pokemon RPG on the big screen? Technically yes, but Let’s Go has a bit of an identity crisis that needs addressing first. To sum it up, it’s a remake of Pokemon Red and Blue that removes wild Pokemon battles for catching encounters. It’s meant to be more accessible but developers Game Freak have a very interesting definition of accessible. I want to first say that I enjoyed the game immensely, but it has some disturbing problems.

This is going to be different for everyone, but the biggest barrier of entry to this game for me was the fact that it doesn’t support the Pro Controller. It’s an intentional “design” choice that I’m very surprised Nintendo got away with. I can see how they want everyone to use the single Joy-Con or Pokeball accessory to make the game more marketable, but it does affect playability as not everyone has tiny hands that fit comfortably into a single Joy-Con for hours on end. Even if you do it’s not as comfortable as the Pro. It just doesn’t feel right to use this on a 30-50 hour RPG. The controls are so contrary to everything else on Switch that once I accidentally closed the game as the navigation in the Home Menu is different to the game’s actual menus. You can’t even hit the Home button if you are just using the left Joy-Con. Finally getting a true console Pokemon game that doesn’t support a proper controller is just disappointing. That needed to be said, but I got over it and ended up having a fantastic time with this game.

The single Joy-Con took some getting used to, but I’ve just learned to deal with it. I’m right handed but used the left Joy-con to play just because the button layout is better with the stick above the buttons. The most consistent way I found to play, was with both hands with my left thumb on the stick and right thumb on the buttons. Then for simple things like battles and stuff you can just sit back and use one hand. I do like that freedom but it still has that awkward feeling and it’s nowhere near as functional as a single Wii remote for example. The cramped feeling reminds me of when I played the original Game Boy at a weird angle, towards the one light source in the room. Ah, that burning nostalgia as the bed-lamp slowly cooked the back of my neck. Good times.

Before I get to the good stuff, there’s one more massive issue with the controls.

This right here is the “catch”. They’ve changed the way you catch Pokemon and I found it a fun concept. Instead of battling endless wild Pokemon, they don’t attack you anymore. Instead you have a new catching showdown where you just throw balls while they jump around. It encourages catching because all your Pokemon get EXP when you catch a Pokemon now and it’s basically free. There’s only one problem, and it’s a big one; the actual motion controls. Throwing the Pokeball can be a miserable experience. It just doesn’t work properly. I still haven’t found a consistent way to aim at a Pokemon left or right without going into handheld mode. Handheld mode works like the Wii U gyro where you can just move the whole screen to center the Pokemon, and it’s fine. On TV mode however, you’re left just guessing where the cursor is. It never shows a silhouette of where you’re aiming or actually explains the technical angle or method to throw with the Joy-Con. You can twist or move the Joy-Con left and the Pokeball will fly to the right. This is another baffling “intentional” design choice to make people miss a lot of throws I think, because the game suddenly has very good gyro controls when you are patting Pikachu. 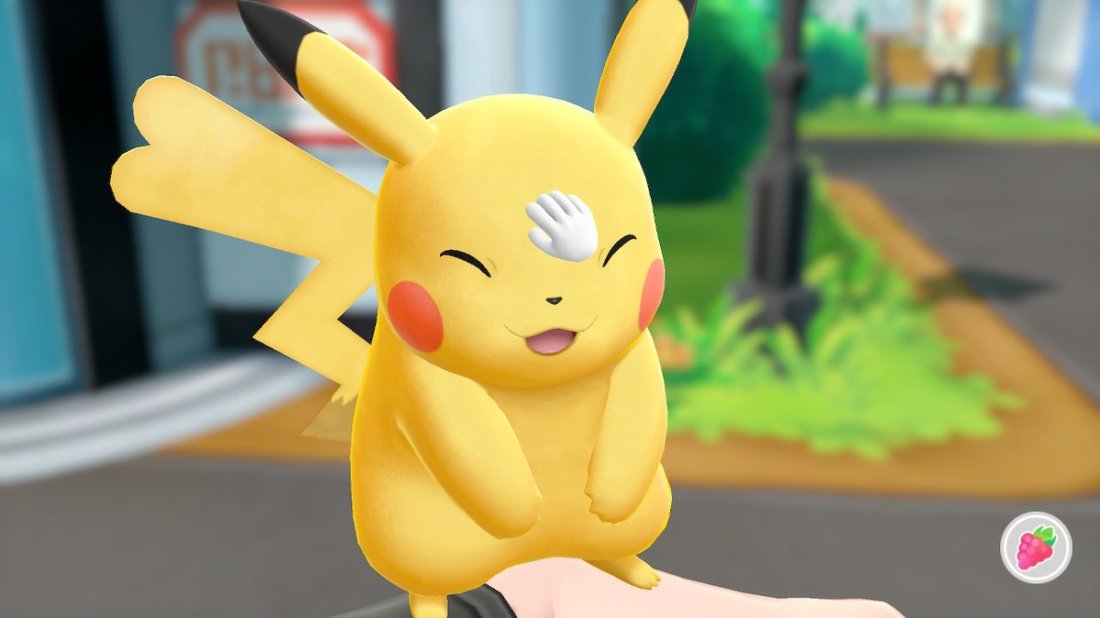 Good Pikachu, hehe. This is a much better addition to the game. Pikachu or Eevee are your starter Pokemon in this game and I found that changed the flow of the game quite a bit as well. Pikachu’s stats I felt were weaker than the usual starter since he doesn’t evolve and I found myself relying on other Pokemon a lot to actually beat gyms and get through hordes of trainers. If you’re worried this game is short on battles without wild Pokemon encounters, there’s definitely enough here I can reassure you. Another big difference in the structure is that every Pokemon gets EXP for battles instead of just one. I actually found this a double-edged sword, as you can build a full team more easily, but if you caught a new Pokemon it would take forever for it to “catch up” with everyone without being able to do specific training.

The game retains the same difficulty as the original in my experience, but the difficulty spikes happened at different times. That said, I was swapping my Pokemon a lot to evolve and fill out the Pokedex, and that made my team a bit under-leveled at times. This game has very good structure and pacing because you aren’t forced to go a certain way, and that feels refreshing after Sun and Moon.

Mmmm, peaceful Pokemon gameplay on the big screen. You can now smell the fresh open air and feel the water splashing at your feet from the comfort of your couch. The graphics are pleasant to look at and the game looks way better than I expected, even nicer in motion than screenshots. It’s very sharp and clean but there’s still that little something missing. Pokemon Red & Blue had very simple graphics but that also brought upon an element of mystery and imagination that made people spread rumours in the schoolyard. The bushes were so simple that you could never be sure what was out there. You never knew what was going to pop out of the grass. Now that everything has that extra bit of detail the emptiness is “filled in”. It’s disappointing to my 11 year old self that there isn’t more stuff out there. I think this reveals a huge flaw of remakes that try to be faithful, they can capture the graphical style but not the actual feeling. I still wouldn’t call it bad, just very safe.

You can now see wild Pokemon in the grass but this has pros and cons. It’s nice to be able to pick your battles and avoid Pokemon you don’t want to catch anymore. On the other hand it destroys another element of mystery, as every visual element is predictable in this game. It makes it feel a whole lot less exciting, even if there’s more going on. The walls and empty space in this game are more daunting. I also feel like they didn’t do enough with the colour palette. There’s an overwhelming amount of the same shades of green and blue. The original games weren’t like this as a design choice, they literally had no choice as a Game Boy game. You can see it in games like Sun and Moon and Ruby and Sapphire, just how great the expanded colour scheme has been for Pokemon. 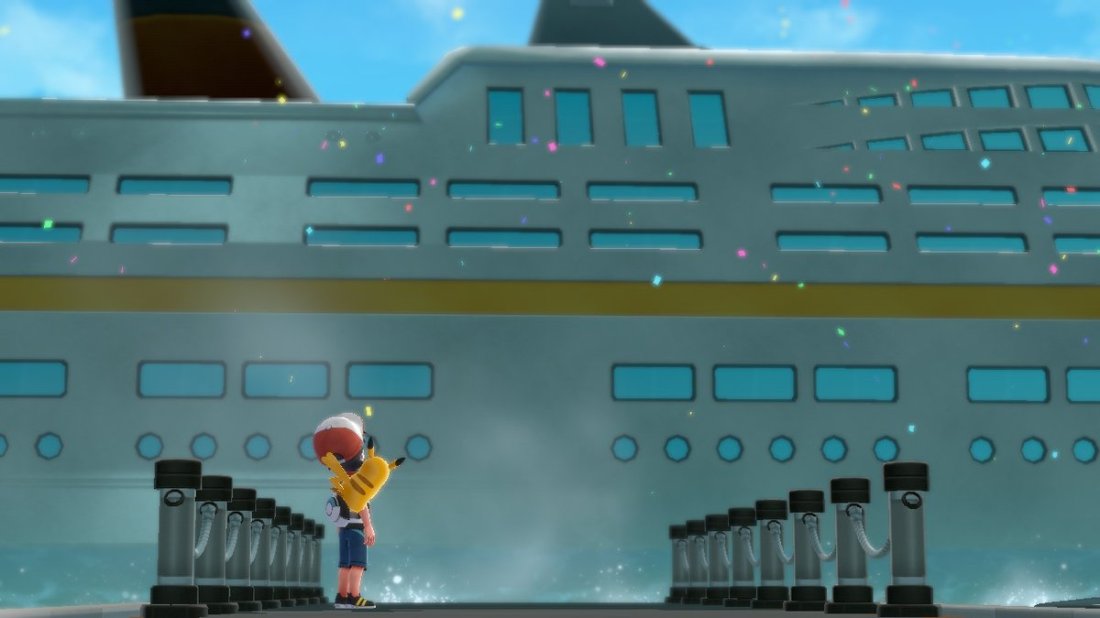 One thing I feel is no doubt improved is the story. The 3D graphics give people more expressions and camera angles, and give a lot more weight to some of the key moments of the game. Seeing the S.S.Anne sail off was absolutely epic, as the camera zooms down behind your avatar to highlight how huge the ship is. It has far more impact compared to a bunch of blocks scrolling left. The gyms are also fantastically detailed and probably the one part of the game where they were ambitious with the colours. I was also surprised with some of the stuff they added. There is quite a lot of effort put into this game’s content, despite my reservations on the graphical style. Every character model and Pokemon looks very crisp and perfect up close too. Blaine’s gym on Cinnabar Island is an experience you won’t forget.

The music is another huge highlight for me. They captured the melody and magic of the original songs and added some nice touches. I feel like they actually improved some songs, like Lavender Town for example. It still sounds haunting but with some more spooky layers thrown in. It’s beautiful. The battle theme is also less annoying and repetitive with higher quality instruments. It’s just overall more triumphant and adventurous. The sound design is absolutely on-point here.

There’s a co-op element where a second player can drop in and out any time. It’s a bit of fun but feels a little unpolished because it creates a few balance issues. Every battle will become a double battle except for the fact that the opponent will have a single Pokemon. It makes the game significantly easier and unfair. It would have been nice if trainers were programmed to send out two Pokemon when you’re in co-op. On the plus side it makes catching Pokemon a bit faster as you both miss throws together. Aside from local co-op you can also trade with people online and battle randoms. Even this is a bit weird because you both have to enter the same “code” of three symbols at the same time, rather than using your actual friend list. Random battles can also be a little bit unbalanced with no rules whatsoever. Oh well. You got this, Pidgey!

Pokemon Let’s Go has issues but overall it’s an enjoyable game, and I see it as a good sign of things to come. The game is very technically competent and most of the problems are intentional design issues just to ensure “Let’s Go” has a different flavour to the upcoming mainline games Sword & Shield. Until then, this game is highly replayable with limitless online battles and it’s nice to have battles on the big screen again. It really does feel awesome to have a console Pokemon and after you’ve caught the Pokemon you want, you don’t really have to bother with that awful catching mechanic. The core essence of a Pokemon RPG is still here and it’s a lot of fun to simply walk around and talk to people. I’m excited about Pokemon again for the first time in almost a decade and it feels good. This game isn’t perfect but it’s pushing the series in the right direction and an extremely enjoyable RPG in its own context. I just really hope we can use the Pro Controller in Sword & Shield.