It’s nice to see you again, Dr Kawashima. This must be the first time I’ve ever been excited to see a doctor. Brain Training is back, the game that elevated Nintendo DS into the stratosphere outside traditional gaming. This “non-game” took off as a great way to use the touch screen and features of the DS and 3DS systems, but how does it hold up on a home console hybrid? It’s a little different. I picked up the new Switch version today and thought I’d write about the experience.

The first thing that threw me off was the game did not recognise my Pro Controller. What is this thing? Kawashima looked at me in disgust and shook his head. The controller turns off when you boot up the software and you can’t switch it back on. I’ve seen other games not support it, but I’ve never seen a game lock it out like that before. The light doesn’t even flash. I guess it makes sense, since you don’t need any buttons for this game. All you’re going to need is the right Joycon and touch screen. Now it’s starting to hit me, this is still a handheld game. I couldn’t go into Daily Training at all while the system was docked, but I was able to do some “quick play” sessions with the right Joycon.

First is “scissors paper rock” which is a brand new brain exercise using the Joycon IR camera. That’s right, that feature exists. It’s nice to see games finally taking advantage of it, with Ring Fit and now Brain Training giving it some use. This is the first time I’ve seen it used as an actual camera on screen. It shows your hand with a heat sensing outline quite accurately. It doesn’t allow screenshots in this mode however so you’ll just have to imagine it, probably to prevent people taking dirty pictures of themselves.

This exercise is meant to test the “self-control” aspect of your brain, as it changes up whether or not you should “win” or “lose” each round. I found it pretty engaging and the novelty is very cool, using your hand just like you would normally play scissors paper rock. I wasn’t too consistent with the IR camera recognising me, but it might take some getting used to holding the Joycon in the other hand. The hardest thing is moving your hand completely away between each quick round so it can refresh. Besides that, it recognises the shapes quite accurately and you can see exactly what you’re doing on screen to adapt.

Ahah! I can still take a screenshot in the explanation screen. Take that, Kawashima! Here’s a little sample of what the IR camera looks like, with another quick play game called Finger Calculations. Simply hold up as many fingers as the calculation says. Except… it’s not as simple as it sounds. I found this one a bit harder to do properly. I can see my hand fairly well in the camera but the detection was a bit wild. Sometimes I’d just solve three questions in a row without even reading them, it seems very generous. You can wildly shake your hand about and get things right. I also discovered that it’s surprisingly unintuitive to hold up three fingers when that was the answer, something I’ve never really thought about before. To use my thumb, or start at the pinkie? It’s kinda funny adapting to this. Like scissors paper rock, this might get better once you get your positioning more consistent. At the moment though this is a bit too gimmicky to be an accurate measure of anything.

Luckily it’s just quick play. The third quick play game Finger Drills was the most natural playing one for me. You just simply copy the hand shapes on screen and it’s very fast-paced and accurate. My hand felt quite good after this too, like a nice stretch.

Now into Daily Training! It’s time to take the Switch out of the dock… whoa everything is spinning around!

There we go. Are you okay, Dr Kawashima? Looks like this game is played with a vertical screen for Training, much like how the DS games were played sideways. I’m lucky that I have a stylus from Mario Maker for this, because it relies entirely on the touch screen. The touch screen works fine but inputs feel slower than the DS systems due to the touch screen itself being different, and the pen being more “sticky”. This was always going to be a gameplay compromise when Nintendo chose to use different screen tech for the Switch. It’s hard to zoom through quick calculations on this screen compared to the tactile DS screen. A stylus is ideal, but it’s still possible to play with your finger since all the inputs are very large.

The classic math calculations test is back, except there’s 25 to solve now instead of 20. No doubt this is a change resulting from the tests Dr Kawashima has been conducting since the release of the first game. There’s a few other returning exercises like Reading Aloud, where you just read a short article or story on screen. It’s presented quite nicely like an eBook, but doesn’t allow screenshots in this mode either for me to show you. Pretty standard text but a good exercise nonetheless. Dr Kawashima explains how reading things aloud benefits you more than it might seem. A tip I will take with me next time I’m streaming a game and not sure whether to read the documents out loud. I’m training my brain, okay. It feels good. We’re all learning.

Aside from these standard exercises there’s some Sudoku and a game called Germ Buster which is a relaxing little Dr Mario clone. It’s cool but nothing you haven’t seen before. Sudoku is a bit different because it has short 5 second exercises instead of full puzzles to start with, seemingly to teach people how to play. A lot of this is still locked for me on the first day.

There’s a couple of standard options returning, like choosing your dominant hand and customising your stamp. Among the new options however, is Brain Training Email. This gives you an option to send your daily results to another person automatically after training. It’s an interesting way to add accountability to your training in case you felt like skipping a day. I didn’t get an email from you today, mister. I don’t think I will use this, but if I did I’d probably just send it to myself to avoid annoying anybody. Ideally this could be used with multiple people sharing data with each other back and forth. It also seems to have friends rankings but I don’t have a friend with the game to confirm yet whether this is online or local (will update right here when I know [UPDATE! Yes, the friend list is online). There’s also some competitive two player games in the quick play menu.

Somewhat ominously hiding at the bottom of the Daily Training screen is the Brain Training World Championships. It’s not available to open right now but Dr Kawashima says that preparations are underway. Get hyped, it seems like they have some big plans for this game. Unfortunately there’s no US release date in those plans yet, but I’m sure it’s coming if there’s a World championship right? This game is only out in Europe and Australia so far, but with Switch being region free it’s still possible to grab it from our eShops if you don’t mind a few different spellings of words.

I’m still barely scratching the surface of this game with a lot of exercises locked on the first day. That’s a sensible approach I think to avoid overwhelming your brain too much. This game is meant to be played in short bursts which worked well on the DS, and works well now as a digital game with a small filesize. I’ll do another writeup in a few weeks / months when I have everything unlocked and I can look back on the overall experience. So far I’m liking it. 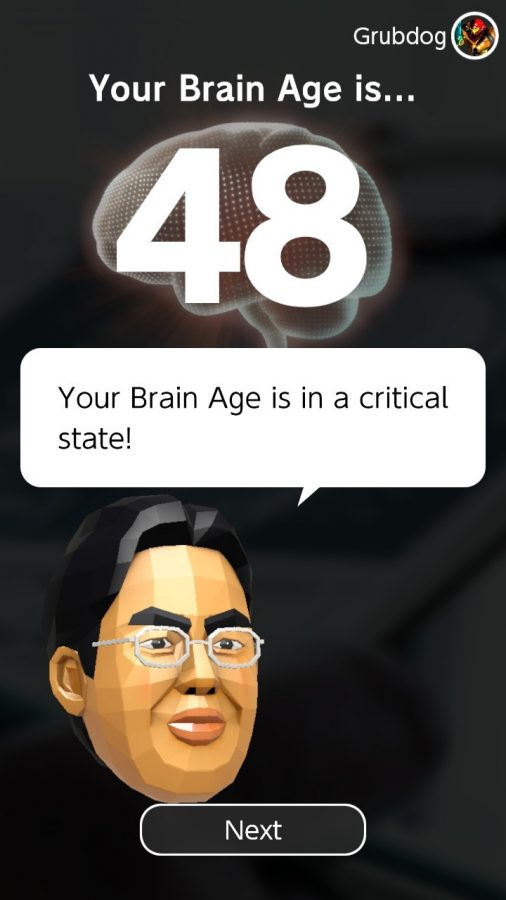 Oops. Looks like I have some work to do before achieving my 20 in 2020 goals. Things can only get better, right?