Right through the head. The shot echoed through the wasteland, no doubt perking the ears of every creature for miles. It’s not the kind of sound you’d go running towards though, is it? Whatever, anyone in the area would just think it was raiders. How many more could there be? I had enough ammo to make the answer to that question “zero”. This school is mine.

Another few on the second story… they haven’t even noticed me, still walking around with that dumb lifeless look all raiders have. Fucking clueless. POP, second one down. Oh look, they heard it this time. Run you fuckers! Shit, a few shots flew by me, I better be quick. I bolted towards the school and pressed against the wall of the building. Around the corner there was a huge hole blown in the wall, I could use this entrance to surprise them. Peering around the corner I spotted two more raiders, and they saw me straight away. The idiots predictably fired all their rounds as I ducked back behind the wall. This was my chance, I jumped out with my rifle cocked. The idiots were staring blankly and reloading as I shot the nearest one in the chest.  Just one more to go, he fired a few shots from a staircase as I ducked back behind the wall. I immediately looked back and lined up my sights in his direction.. he’s gone! The school was a giant mess of rubble and hiding spots, my eyes darted around. Where the fuck are you? I couldn’t stay in the same spot, I hustled out and found a place behind some burnt lockers. Still no sign. He probably went up the stairs, dumb raider logic. Get to the highest point and everything will be OK! Yeah right.

BOOM! An explosion went off just behind me, right where I entered the school. The moron thought I was still there. I ducked under a desk near the lockers and didn’t make a sound. Sure enough, a grotesquely dressed raider came out of hiding and approached the area where the bang went off. I wasn’t very well hidden but it didn’t matter, he walked right by and didn’t even look in my direction. Before he could congratulate himself on a job well done, I stood up, slowly lined up my aim, and shot him in the back of the head.

Time to look around, there’s bound to be something interesting here. The group patrolled the place as if they were protecting something. The raiders had nothing but weapons and cigarettes on them, bunch of scum. I took a few grenades from the last raider I killed, these might come in handy. I checked the battered lockers. All empty except a few bottlecaps. 8 bottlecaps in total, is this all they had? Maybe they were here for another reason, just for shelter? Some kind of idiot fort. There wasn’t much to see besides some mattresses. It seems like they were pretty comfortable here until I killed them all.

I headed back to a door that led underneath all the rubble. I was too busy killing people to notice this before.  It probably led to the main area of the school with classrooms and shit. I put the rifle away and took out my trusty handgun, there’s a good chance there’s more raiders in here if anything. Would they have heard the gun shots? They could be waiting for me, but so far they seem too fucking dumb to plan that far ahead. Whatever, I’m prepared.

Immediately after opening the door I heard a yell. It was a young lady screaming “I’ll tear yer heart out!“. Shit, I couldn’t see her! My gun’s ready, come on bitch. She jumped out and I was startled to see a metal tin over her head. The fuck? Whatever, a few bullets to the chest this time. No problem, she fired one shot up to the roof as I shot her down. I searched her but found nothing interesting except the helmet, not sure how she could even see with this thing. Probably why her aim was so shit.

Keen to explore the school, I took out my light and continued down a dark hall. Peering around the next corner I could see another raider down the end looking the other way, it was a man dressed like a fucking loony with brown straps all over his body. I turned off the light and crouched. Wonder how far I can get before i’m noticed? I kept my gun out, not naive enough to try and pull off any close combat maneuvers. As I got closer the man moved, I froze completely still. He began walking away from me and disappeared into a room to his left. I crept up to the room, trying not to make a sound. As I approached the room, I heard voices – there were two of them.

Two raiders talking about “newbies” in their group. How fucking desperate do you have to be to join these guys? Between the laughing and feral spitting sounds I heard something about “monsters” to the north scaring the shit out of them. They laughed at the prospect and didn’t seem to believe the newbies stories of “claws of death”. They had no idea what was out there, haha. Probably born in this shithole. I couldn’t afford to waste too much time listening, their laughter was my opportunity. I stood up and placed myself in the doorway, it was a small room and there were two of them. One of them noticed me and I shot him before he could raise his gun, the other one turned around to meet my second bullet. That was easy as piss. I looked around and grabbed a few medical supplies, jackpot. This room must have been the school nurses office or something, it was hard to tell with all the brown and rubble, the room looked like it was about to collapse. As I headed back to the doorway I found some more bottlecaps on one of the raiders, looks like someone wasn’t sharing.

I walked back through the hallway and noticed another door, locked. Fuck it, it wont budge and looks way beyond my lockpick skills. I went down a different corridor this time, halfway down there was a body hanging from the roof by two sharp metal forks. This was probably that raiders fate if they found out he was skimming bottlecaps. Maybe that was one of the “newbies”? I bet he wished those claw monsters would have killed him first. I continued on to find a stairway, and slowly climbed up.

Footsteps, immediately at the top of the stairs! I heard voices and some rustling, it sounded like a group. I stopped myself near the top of the stairs and listened. There was whispering, but I couldn’t make anything out, it sounded like they were scared. Hah! They would have heard my gunshots and have no idea what’s going on. I snuck closer and met the entrance of a locker room. I heard people taunting each other, each daring the other to be the one to go forward and investigate. I took the initiative and stepped inside with my gun ready. WHOA, hello. They were everywhere! Men and women, all armed, about 8 or 10 of them! SHIT! I fired a shot into the air and bolted back towards the stairs, this was too much! Bullets ricocheting everywhere, fuck! I desperately pulled one of the grenades from my bag and tossed it in the room. 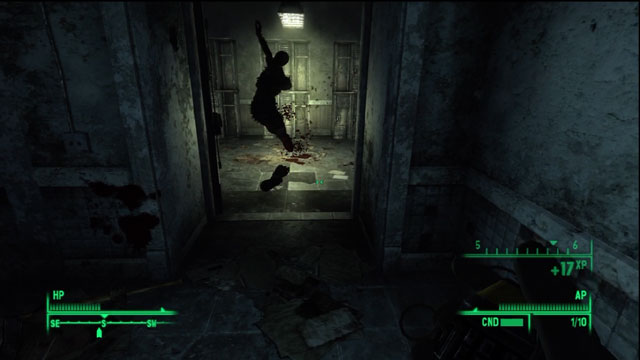 BANG, fucking perfect. A corpse and some body parts flew by the doorway, must have got a few of them! A loud scream of agony pierced the hall, almost louder than the explosion itself. What’s wrong bitch, did I kill your family? Life was too short for guilt, and sympathy was about as useful as a bank account. I was fueled on adrenaline now and had to finish them off before they got their bearings. Running straight in I aimed to the right where the scream came from. There was a man and a woman crouched down, the man missing an arm. A few seconds later he was missing an eyeball as I shot both in the head with two fast bullets. She only managed half a scream this time.

I turned around expecting more, but that was everyone. Bodies everywhere, some already dead before I got here, I kicked them all to be sure. There were only a few rooms on this floor, all branching out from the main hall. Classrooms with boards, desks and chairs all over the place. The entire area smelled like shit. A table caught my attention, there was a huge molerat carcass lying upside down on it, all the good meat picked clean. I opened a fridge, it was full of sugary snacks. The stuff that was killing people before nuclear bombs, probably hasn’t even gone off. I’ll stick to these molerat eyeballs, thanks. Before I could get comfortable, I had to make sure I was the only one left in this place. There was nothing else on this floor but a staircase leading up one more level, I wiped some blood off my gun and made my way up.

What the fuck! A vicious dog greeted me at the top of the stairs, leaping out of the darkness and straight towards my gun. Shit, this thing was smarter than a raider! It launched with great speed and already had its teeth climbing up my gun towards my hand. I wrestled my arm to gain control and shot it in the mouth. Damn… I probably didn’t need to kill it, that was instinct. Poor thing was probably just hungry.

I cautiously looked ahead and continued on inside, no voices this time. Inside the doorway was a huge room. Lots of shit up here, good god! This must have been the library, burnt books and computers filled the shelves and desks. No sign of any more raiders. I looked around every inch of the room, unbelievably there was a computer still working. There was a file open, looked like a journal of some sort. I’m surprised these fuckers can type in the English language. My eyes scrolled down the screen and I got the jist of it – the raiders were planning on attacking that vault in the middle of nowhere and setting themselves up there. The idiots seemed pretty keen on burying themselves underground. Who’s smart idea was this anyway? Only a moron would keep a journal in this world, nobody will read it unless they just killed you.

I went back downstairs, there were no more rooms or stairways to explore. Looks like i’d completely cleared the place out now, what a fucking relief. I had a sharp pain in my arm and my eyes were getting dizzy, time for some rest. I remembered seeing mattresses in one of the classrooms, they’ll do. Yep, 8 beds here. How many people did I kill? More than 8 for sure. I knew there was still a risk of someone coming back, and if they did come back, this room is where they’d come. Probably not the best place for a nap. I dragged one of the mattresses to one of the stairways, there was a little room that looked like a closet I could spent the night in. I plonked the mattress down and kissed the piss-stained wall goodnight.