So, while browsing the barren wasteland that is the DS’ upcoming release schedule, I stumbled upon Puzzle Overload – a collection of 1001 various logic puzzles. Clearly enough to warrant a mental breakdown. “Wow,” I didn’t proclaim, quickly averting my eyes to the next game on th-waaait a second! Telegames! Telegames’ logo was on the box. The Telegames.

Telegames honestly fascinates me, and not just because they survived their eyebrow-raising attraction to both the Atari Jaguar and Lynx (responsible for bringing over a handful of big name titles such as Double Dragon and Worms along with all their original work). After framing their award for “only third party publisher who gave a shit,” Telegames would then go on to dominate the PlayStation and Game Boy Advance with games such as uh, Santa Claus Saves the Earth. They have managed to barely exist like this since the ColecoVision and 2600 days.

When the Nintendo DS rocked up in 2004, you better believe Telegames was there. Dripping in sweat and doubling over with a stitch, they announced two of the very first titles for the system in the form of Ultimate Card Games DS and Ultimate Brain Games DS. Better still, they were going to support online multiplayer. This was before Nintendo had even launched the Nintendo Wi-Fi Connection. Playing DS games with people all around the world over the internet!? It was exciting. It was news. IGN went and ran an article about this, using clown-grade scans from a retail catalogue. First screens of Ultimate Brain Games DS were here. More details about the two games were to be announced at E3 that year, ahead of their planned Q3 2005 launch.

Nope. Ultimate Card Games DS and Ultimate Brain Games DS never made their release date. The GBA version of Ultimate Card Games was hurled onto retail shelves in time, but that’s not where the party was going to be at. They would then evidently go on to drain Telegames of everything.

See, I used to somewhat follow their progress, as it eventually reached an amusing “how is this even possible?” level of pure train wreck.  These two games were delayed time and time again – for years – yet never officially cancelled. 2006 slipped by… then 2007. The ‘just in time for Christmas” release of 2008 actually seemed promising. But it never happened, and that’s about when I stopped keeping track. I had better things to do with my life, such as drinking expired chocolate milk from 7-11 because it was so cheap.

The promise of a potential Puzzle Overload got me excited all over again. Was this a retitled attempt? Well, no. It turns out Ultimate Card Games DS is actually a thing now. It really, seriously exists. According to Amazon, the game launched November 2011. Seven years after it was announced. SEVEN YEARS. The ‘DS’ part of the title was dropped in the end, and the art style has gone through some horrific mutation since those initial 2005 scans, but holy crap. Telegames finally did it. 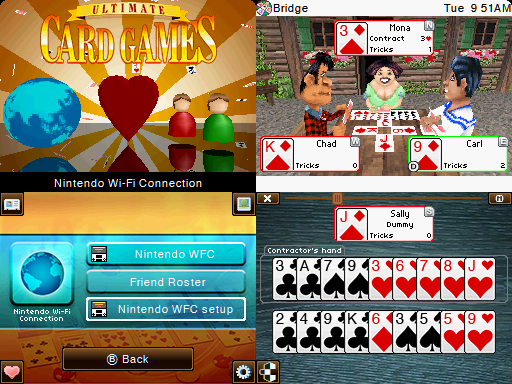 Ultimate Brain Games DS, though? Nah dawg, that shit must have been canned at some point. Maybe bits of it will be used in the upcoming Puzzle Overload, due out later this year.