This is how Vacation Isle began development. A bunch of guys sitting around a table, aspiring to rip off a 9 year old water ripple that some guy at Nintendo did in 2 weeks. Well they succeeded, the water looks pretty good. Unfortunately they were SO EXCITED, they forgot to make the rest of the game before shipping the disc. Who can blame them though? Mario Sunshine has great looking water!

Super Mario Sunshine is a fantastic game that really makes you feel like a platforming god with it’s robust camera controls and hovering ability. The FLUDD backpack instills a feeling of confidence as you jump around safely in ridiculously high places, and offers a wondrous view of the environment. That draw distance is incredible, you can shoot water off a cliff and watch it slowly fall until it splashes on the ground. I spend a lot of time in this game finding a good spot and just standing there, rotating the camera until the smile on my face starts eating itself. Mario could already wall jump, triple jump and backflip, and now he can fucking hover inbetween with full camera control? This game is insane. It’s like when the manual was introduced to Tony Hawk and tricks suddenly lasted 2 minutes. Except unlike the manual, FLUDD doesn’t suck the fun out of the game and didn’t destroy the entire series. It only destroys the ground and sludge baddies. The splashing sounds are intensely satisfying as the water says “fuck you” to the ground while you rocket away from danger. Super Mario Sunshine to this day is still the most open and interactive playground Mario has ever played in, you can do so many cool things that have no reward whatsoever. That’s OK, because Mario’s on vacation. If he wants to slide around on his belly, he’s fucking sliding around on his belly. The sludge and kidnapping is just a sidequest to a great time.

Whoops, back to my Tony Hawk review! Oh wait, Vacation Isle. Fuck this game. I’ve reviewed quite a few bad Wii games; I usually enjoy talking about them and sharing the love. Some bad games have even turned out great! Vacation Isle is a game I bought a year ago and have threatened my Wii with multiple times, only to switch it off in horror as my TV cries out in pain at the title screen. The game greets you with a badly compressed and stretched .JPG of “Vacation Isle” in uncoordinated colours, and campy holiday music from a singer who sounds like she’s vomiting and swallowing at the same time. Unfortunately this awesome water isn’t drinkable.


Here’s the game. The beach setting became a lot more interesting when I realised I was on the moon. It’s also set thousands of years in the future where we have vehicles that hover one inch above the water so they don’t have to react at all. I included the 1 minute voice introduction in this video because this guy is the star of the game; I’m impressed they found a voice actor who has never seen a videogame before. It also takes about that long for the gameplay to load.

Take 4 marbles, put a block of wood on top and roll it forward as fast as you can. The wood will probably fall off and the marbles will roll in different directions. The physics in Vacation Isle are nothing like this, but that’s what happens to your brain cells the first time you play. To move left and right you can either use the analog stick or tilt the controller, a nice option right? Isn’t it nice they included both? The intention was nice, but both control schemes work at the same time and the game gets confused very easily. That means if you decide to use the analog stick to turn then you better be standing completely still or you’ll start doing a really wide semi-circle that gets the camera really excited.  If we studied the algorithms in this game we might uncover the secrets of Black Holes. Switch on the Wii Balance Board and there’s an experience you’ll never come back from.

The game pretends to have different sports but all the water sports control the same with a different animation. Slalom involves doing the same course 5 times in a row. It’s so mindnumbingly easy that it’s hard to muster up the patience to actually clear it; quite an innovative challenge. In fact, you get punished for getting too high a score, as the game takes about a minute to count the points as they slowly scroll to a total at the end. It’s like the developers wanted to provide evidence that the game can think. There are buoys and giant squids and sharks all threatening a perfect run, but as long as you tap left or right in the 5 second window, you’ll escape a bloody death.

Vacation Isle also pretends to have multiplayer, but it’s really just 4 people taking turns. Being the 4th player is a gift and a curse because the game is usually shut off and thrown out the window before your turn comes. You can’t pause the game because the theme song takes this opportunity to blast through the speakers at twice the level of the standard gameplay music and rip your ears off. 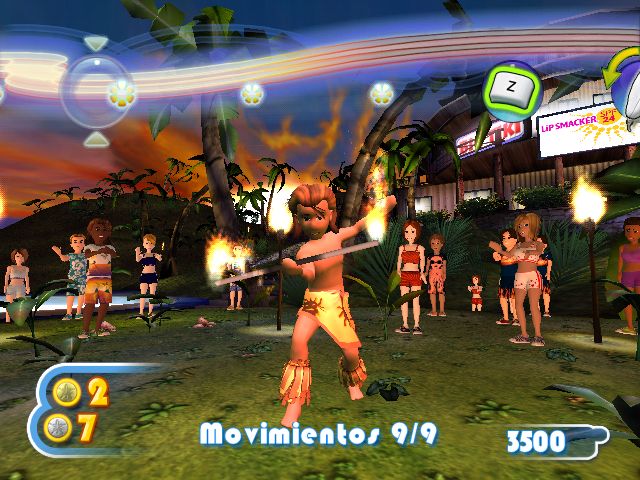 If you fail any of the water games, you get sent to prison. All is not lost, as the game kindly lets you work off your sentence by taking part in a dancing game! If you’re quick enough to tap the buttons as they slowly scroll over to the left, you can pass the challenge and return to your watersport adventures. Then comes the bigger challenge: clearing that same song 5 times in a row. I use the term ‘song’ pretty loosely; it doesn’t have any notes or melody, there’s just some really angry guy going batshit on bongos and the cheering of the crowd almost drowns it out. It all combines to form a big clusterfuck of screams and destruction that is now my mental soundbyte of hell.

I can’t tell you any more about the game because I elected to stay in prison. Such a shame, surfing looked so good! Ah well, it’s not so bad in here. The ground is solid, and when I randomly get thrown up into the air there’s a nice hard roof to stop me. 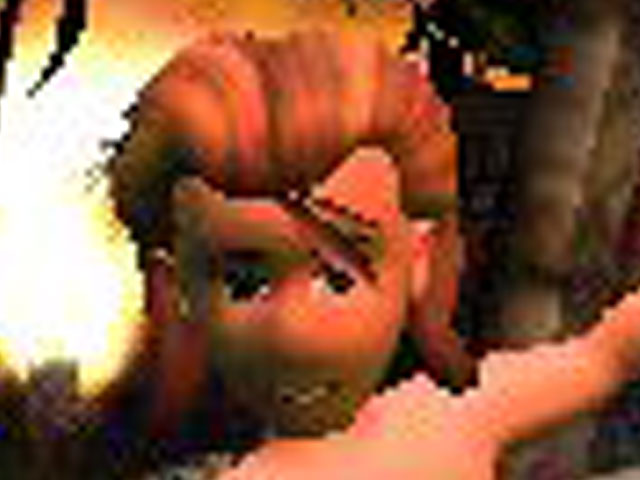 Vacation Isle: Beach Party is such a bizarre experience. You can feel the eyes on the disproportionate people of the island staring into your soul with their oversized heads. Their glance is a combination of optimism and despair, as they try and convince you this is all there is to life. On Vacation Isle there are no other games; and in real life, there is no Vacation Isle. There isn’t even a Wikipedia article about it, it’s like an undiscovered island of misery. Sailors have chanced upon it, only to continue sailing.

Vacation Isle‘s horrible presentation, awkward character design and broken controls made me grateful for the little things it does right. It uses the pointer in menus, so at least it’s better than Super Smash Bros. Brawl. Hey, no screen tearing either. This is a game I can only recommend to Capcom as an example of how to make a horror game that keeps the screen and framerate in one piece. Everyone else, keep sailing.