UNITE UP, gamers! No, not for a fan campaign. Not for a region-locking protest. To SAVE THE WORLD from the forces of evil! Wait.. come back! I can see you all running away from the screen. The Wonderful 101 is that kind of game, it elicits of strong response whether it’s excitement or discouragement. You just have to tell people how uninterested you are because the concept slaps you in the face and demands an answer. You have a choice here, to buckle up and save the world OR keep walking and hope someone else does it. This review will find out what kind of person you are.

I’m not going to say the gameplay is intimidating, because then it will be. The Wonderful 101 is a game you shouldn’t approach with any preconceptions, because there has NEVER been anything like it. At its core it’s an action game where your movement is driven by enemy patterns and environmental hazards, but the approach is vastly different because you are 100 people. I won’t compare it to Bayonetta, but I will compare it to 100 Bayonettas. You can create a sword, gun, whip, fist and many other things that effectively transform your characters moveset and effectiveness on the spot. We are all one, but we are all special. 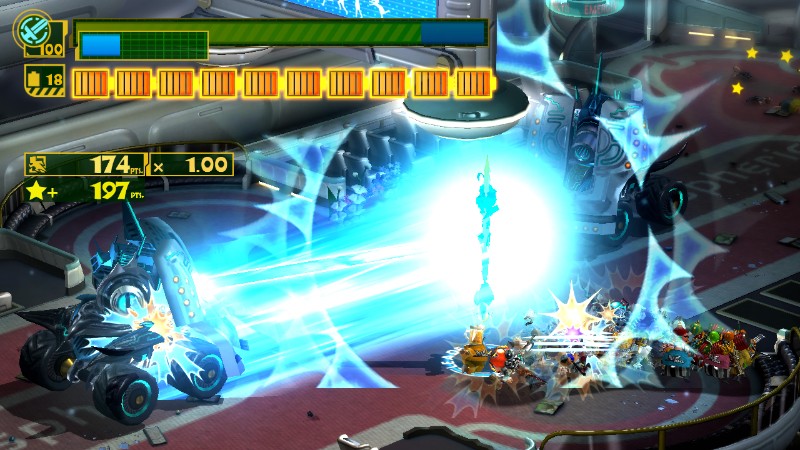 An enemy approaches! It’s a tank, no TWO TANKS! What will they do, how should we attack? Let’s FIND OUT! Attack enemies with every option you have, block all their attacks with all your tools, and it’s just a matter of time before you find their weakness. It’s not SIMPLE, but it is logical and there are always visual cues that help connect the dots. For example, the blue sword is the same colour as blue lasers it can reflect. The red fist can penetrate fire. If it’s not apparent at first, it will be after you experiment. Unite morphs can be drawn with either the right analog stick or the GamePad’s touch screen; I found the analog stick best because it’s quicker and the shapes are very simple. Circle for a Fist, straight line for sword, right angle for a gun, etc. Some of the more complex ones require some odd twirling, but its simple muscle memory in the end. Once you’ve got the hang of a single unite morph, you can stack multiple unite morphs on top of each other. You simply draw another shape, but instead of pressing A you press X and your team will assemble and layer the attack on top of what you’re already doing. With a full bar you can pull off some incredible combos with different unite morphs going off at once and it feels amazing.

The Wonder Liner is more than just a template for Unite Morphs, it lets you draw any shape you want and then move around as that shape. This is the most innovative new game mechanic I’ve seen in a long time and it’s as fun as it sounds. You can use the awkwardly drawn line of your choice to rescue people and collect O-parts. It’s never really essential but can be used to cut down time and improve your rank, further expanding the depth of the game. Thinking of ways to throw people into situations is really engaging and the environments are so robust and detailed that you usually WILL find something cool by poking it. The liner is extremely functional and will go anywhere, whether it needs to or not. 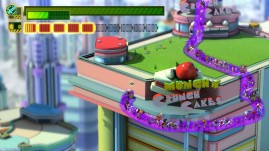 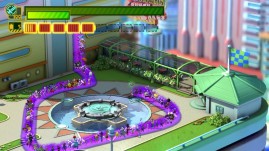 The game never mixes up the flow, because there never IS a consistent flow. The only thing constant is change, as the game continually tries to destroy your expectations and blow your mind’s pieces into pieces. There are so many different things I could talk about but I think each scenario is best experienced with no prior knowledge. Not only is there great variety in the environments but in the gameplay input method and direction. The context and the battlefield changes, and that’s on top of the constant flow of new enemies. Every Operation could be its own videogame, that’s how ridiculously varied it is. It’s easily the most content-filled, action packed game I’ve ever played. Not to say it’s the best because it certainly has flaws (some awkward camera angles) but that’s just the nature of the beast. The fixed camera is a necessary design choice to enable such variety in playable situations. As a new gaming experience it does a lot more right than it does wrong, and that’s not easy when you’re fighting peoples preconceptions for what a game should be. This game sets more standards than it follows.

It has a story which is quite heavy and there’s a lot of text. This is one thing I don’t really like because it makes it hard to replay. You can skip (most) cutscenes but there’s just so many interruptions and the game often explains too much. It’s best played in “episodes” like a TV show and if you treat each Operation like that it flows a bit smoother. Unfortunately the game is too awesome to simply play one episode. The dialogue is pretty funny and there’s also quite a bit of emotion. The music and sound effects compliment the game very well with an outstanding theme song and overall a very well composed epic score. I usually tire of music that tries too hard to be epic, but The Wonderful 101 does a good job of mixing up the melody according to the situation. 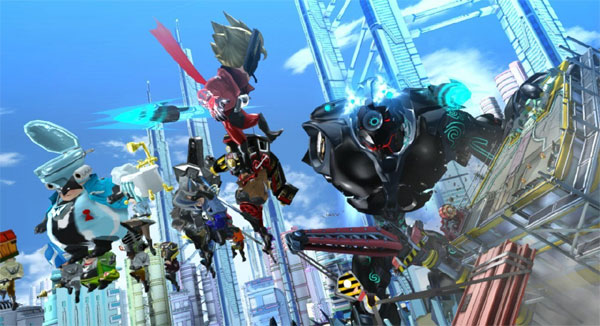 Boss fights are spectacular and easily the greatest in videogame history. That’s a huge, idiotic, ignorant claim to make about anything, but it rolls off the tongue effortlessly after the kind of stuff you see in this game. Seriously, I think everyone who has played it will be unanimously nodding their head right now. Bosses have multiple stages and events attached to them, and there’s so many different ways to approach certain patterns and skills. The line between a boss fight and action sequence is blurry in this game because  there’s just so much going on. The environment essentially is alive and requires you to take in the entire screen with a focused peripheral while fighting. The feeling is an electric combination of alertness, aggression, uncertainty and finally accomplishment. The fact that your characters all appear so tiny compared to the gigantic enemies just makes it feel even better. Know your enemy, spot your moment, attack fast and hard. This is the key to enjoying all of Platinum Games masterpieces.

So to answer the initial question, is this game for you? I think you know the answer, otherwise you wouldn’t have read this far. I believe in you. A real hero isn’t born of skill or power, but good intentions. It’s an amazing experience even when you’re doing it wrong, hell ESPECIALLY when you’re doing it wrong! I don’t think I’ll ever get every Platinum medal in this game simply because it’s too much fun to run around like an idiot (and quite honestly the requirements are a bit too convoluted and exact). I’m currently halfway through my second playthrough and keen to start a third. Maybe by then I’ll know the game well enough to Platinum it, WE SHALL SEE! The Wonderful 101 goes above and beyond the call of duty to be a videogame, and takes full advantage of every ridiculous concept it can muster. Above all, it shows that being a hero doesn’t mean being the best. It means giving it a go and taking advantage of the fact that you are alive. Play through The Wonderful 101 and you will have a new definition for the word videogame.