The past few Pokemon generations I’ve found myself thinking more about the journey and what was important to me in a Pokemon game. I still loved the games but something started fading away for me and I’ve finally been able to pinpoint exactly what it is. If you haven’t heard, a recent phenomenon called Twitch Plays Pokemon has emerged allowing people around the world to all play Pokemon at once with a rush of inputs in a text box. At its peak 100,000 people were all playing Pokemon Red together and we triumphantly beat the game over 17 days of anarchy and surprises. Catching Zapdos was a highlight for me as I was one of the people pressing A and scrolling down to the Master Ball, an unbelievable accomplishment to pull off. We all worked together and after much hard work, coordination, confusion, sacrifices and ledge jumps; Red became champion.

A huge output of artwork, jokes, comics, songs and even a religion spurred based on the Pokemon we carried with us (and lost) along the way. People around the world grew attached to the Pokemon in the party and Bird Jesus, Lord Helix, AA-J, The Fonz, Air Lapras and All Terrain Venomoth all became stars not because they were perfect, but because they fought. Whether or not you found Twitch Plays Pokemon amusing, it certainly did highlight a lot of strengths of the series and bring a lot of people together. All these Pokemon meant something, despite huge obvious weaknesses and lack of balance.

This brings me to discuss the modern internet-enabled Pokemon experience. I like being competitive in Pokemon because battles are a lot of fun. However I’ve now realised the exact problem with raising a competitive Pokemon; the journey means nothing. If you want a Pokemon with an appropriate nature, strong IVs and balanced EV’s you have to drop all attachments to your current party and treat the thing like a weapon. To make a competitive team, the first thing you have to do is drop the Pokemon you caught in the beginning. Despite being right by your side as you obtained 8 badges, explored caves, saved towns and conquered the champion, your Pidgeot has the wrong nature and it’s EV’s haven’t been distributed evenly. It’s useless. The next casualties are all the Pokemon you breed that don’t fit your criteria. Suddenly you either have 50 Pidgey’s in your PC or you’ve had to release them (in the Pokemon World if somebody did this, they’d either be a farmer or a monster). Then you finally water it down to a perfect Pokemon and it’s time to train it with a very structured procedure in specific environments. Now, how much do you love this new Pokemon? For me the answer is not very much. I look at it and its eyes are dead, but I can still hear the cries of the Pokemon sacrificed along the way. 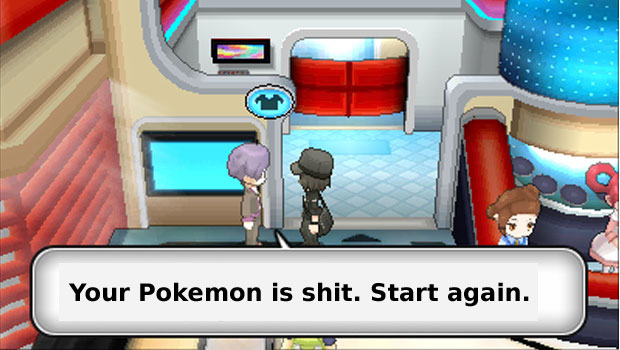 I appreciate the depth to Pokemon’s mechanics and especially the variety that’s possible with movesets and individual strengths, but not the methods. I can’t battle without heart, and it’s difficult to feel attached to something that was born yesterday in a daycare factory. Here’s a few suggestions I have to change this emphasis and keep the depth.

1. IVs are balanced. This means no Pokemon can possibly have 31 Individual Value in every stat, it’d work the same as EV’s currently do in terms of distribution. So if you want a perfect speed stat to fit perfectly into your speed graph, you’re either going to have to have average attack or defense. The Pokemon I caught in the grass should be able to have at least one thing going for it, slightly higher defense for example. At the very least, it would be a mystery for the opponent to worry about.

2. EV’s all have the same peak. This means it doesn’t matter where you train or where you go, you can always get stronger in every category. This is how Pokemon Blue and Red worked and there was nothing wrong with it.

3. Natures should be abolished. Honestly, they are useless. Every Pokemon has only one stat as it’s highest and lowest, it should be that nature. All Slowpokes should be Relaxed, all Rhyhorns should be Adamant. There has to be a different outcome or category for this because only a small handful of natures have ANY use on most Pokemon, meaning 85% of them have no purpose.

4. Add a new stat. This could backfire huge but it’s just an idea, an extra “Heart” stat for beating Gyms with a particular Pokemon or simply using them before you become champion. It could slightly increase your luck or critical hits. I would happily accept that compromise, in fact it would be an encouraging underdog strategy. To stop people abusing it, make it impossible if a Pokemon came out of an egg or was traded.

Alright, I’m done trying to be an expert. I still enjoy Pokemon and I don’t think these things are necessary, but they would certainly improve my experience and push the focus back in the right place. I started Pokemon Blue a few weeks ago and can not believe how well it holds up. I spent 50 hours getting a balanced team and exploring as I beat the game again, and loved every second of it. The cartridge still works and saves properly to my surprise and delight (unfortunately the same can’t be said for Pokemon Silver, works but doesn’t save anymore due to having a more complex cartridge). Now I’m currently playing Pokemon Sapphire on the Game Boy Player and it feels really grand on the big screen, almost like EarthBound. The EV / breeding problem still exists in this game but it’s not my concern, because my team is taking on Hoenn, not the entire world. This also has an effect on the legendary Pokemon, their presence in the world is much greater and they feel more ominous and cool when the world they effect is actually important.

Anyway, the main purpose of writing this is to see what you guys think. Do you still enjoy Pokemon as much as the old games, and do you play competitively? I honestly think the game has to go back in a more simplistic direction or it will stagnate, X/Y is the very limit for me. I enjoyed the game but now when I boot it up, it’s just a misery of menu’s. I want to hear how you guys approach Pokemon and your thoughts on competitive teams, and whether or not you think making it simpler would be a step backwards. Personally I feel like if more people have the confidence and time to battle; popularity, variety and competition will all increase to a new level.

19 thoughts on “Pokemon – The Competitive Conundrum”