He’s back guys! FreezingInferno once again delights us with a guest review of Shovel Knight, recently released on WiiU, 3DS and Steam. Past the break, you’ll get to learn just how awesome this indie game actually is. As an added bonus(?), I put a small short opinion about the game myself at the end of the review. Enjoy!

Today we’re going to talk about an alchemic force of video games and their assorted universes; the spirit of Pure Platforming. Lord knows just how many inanimate shells have been given life by the cosmic power of Pure Platforming. Let us glance at the arc of history, and take but a taste. 1985. A plumber and his brother save video games. 1986. All manner of monsters are commanded by an undead nightmare, and a man with a whip sets out to stop them. 1988. A blue robot goes on the offensive against eight bad robots, and everyone thinks that’s as good as it can get for him. 1989. A sentient duck in a top hat with a cane searches for even more treasure, inspiring a generation. This is a simple glance at the once bountiful kingdom of the Grey Box. It is remembered fondly by its former subjects, many of whom have gone on to create their own kingdoms and provinces in the realm of the video game. Some have attempted to call back the spirit of Pure Platforming, with mixed results. There are terrible cases where a dread beast has emerged from the pod, filled with nightmarish difficulty and pledging allegiance to “nostalgia”. Then there are the cases where magic has happened, and Pure Platforming has been returned to its original state. The microchip alchemists at Yacht Club Games have done neither of these things. Their achievement has somehow surpassed those. They have brought back the ancestral memories of Pure Platforming from the golden age of the Grey Box… and yet their new creation is more than a shambling homunculus fueled by nostalgia. It has its own identity whilst also utilizing the finest parts of its predecessors. Hail to the new finely crafted champion of Pure Platforming. All praises to the Shovel Knight. 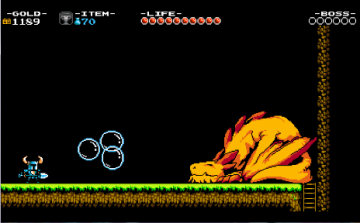 It is important, then, to create a safe space within which we can define Shovel Knight. A happy little bubble containing phrases such as “Shovel Knight is an electronic video game available for download on Steam, the 3DS, and the Wii U.” or “Shovel Knight is a retro-styled action platformer created by Yacht Club Games”. That second one is important to understanding the magic here. Yacht Club Games is a newish development studio, and Shovel Knight is their flagship first title. This is far from their first rodeo, however; the company’s founder is Sean Velasco, a Wayforward expatriot. That explains things. In this space, I make the bold claim that Wayforward and its band of alchemists have perfected their Philosopher’s Stone. They understand the inner workings of Pure Platforming, and that it does not turn lead to gold. It turns things to pure mercury, ever shifting and changing. With their secret formula, new life was breathed into things. A alfling-genie whips her hair back and forth, perfecting what Konami failed to do in 1988. A rich duck collects gold and bounces everywhere, perfecting what Capcom appeared to have perfected in 1989 (contrary to what the games journalists will have you believe). These are impressive, but they are very focused feats devoted to polishing one thing at a time. Shovel Knight’s beauty lies in how it takes elements of its inspirations, but remains its own thing. Coincidentally, Shovel Knight’s beauty also lies in its presentation. 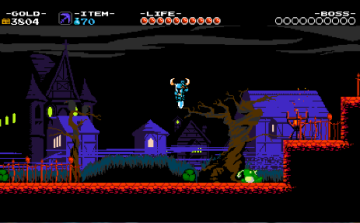 We have established that Yacht Club Games and its staff are alchemists. Alchemists who understand a great deal about old video games, and the soul of Pure Platforming. One such alchemist, David D’Angelo, has written several words about the design philosophy of Shovel Knight. Shovel Knight is not designed as a “retro throwback” to old video games, in the traditional sense. The alchemists have created a hypothetical; a “new” NES game. One that takes advantage of nonexistant chips and memory mappers to create the final evolution of the NES game, unconstrained by the true limits of the grey box. In places, D’Angelo admits to breaking the rules of the NES. This is fine. The intent is there. The result is something altogether strange. The blog post mentions a Famicom game called Summer Carnival ‘92 Recca, which is an intense and frantic shooting game that uses trickery to create a fast-paced experience that impresses the player. “I can’t believe the NES can do this!”, one might say. It has to be seen to be believed. In our 60FPS 1080p world, it can be hard to remember when pixel graphics impressed. The alchemists did not forget. Shovel Knight brings those days back. As soon as I booted up the game and was hit with the art style, plus the music… my jaw was on the floor. Shovel Knight looks and sounds amazing. The sound’s due to Jake Kaufman, and if you doubt his credentials then you have forgotten that he took the NES Ducktales moon theme and made it better. He is a musical wizard.

But how does she play, Captain? Hold on to your hats here. Shovel Knight is the ultimate NES game, and not just in its presentation as an inevitability of evolution. So many of these new-old games fall into that terrible trap of relying on nostalgia as a crutch (see: The Angry Video Game Nerd Adventures) and using that to coast along instead of becoming its own unique entity. Shovel Knight gets to have its cake and eat it, too. It takes inspiration and obvious cues from other popular Nintendo games its audience may have played before, but presents them in a way that isn’t a cheap reference designed to light up the player’s neurons like a Christmas tree. These mechanics will remind the player of other NES games, but won’t hit them over the head with it while screaming HEY SHOVEL KNIGHT HAS A POGO JUMP WITH HIS SHOVEL! JUST LIKE DUCKTALES! REMEMBER DUCKTALES? REMEMBER 1989? REMEMBER IT SO YOU THINK THE GAME’S BETTER THAN IT IS! No. Shovel Knight does have a pogo jump similar to Ducktales with his shovel. He also does collect an astounding amount of treasure and currency as the game goes on. Let us then define more things that Shovel Knight does well, inspired by the classics.

The “plot” involves the hero Shovel Knight going after the Order of No Quarter, eight themed bad knights who are causing trouble in the land. You run and jump through their themed stages and deal with various elemental hazards and unique stage gimmicks to test your action platform skills. Once all eight knights are bested, you go to the main villain’s fortress and use all you’ve learned to beat the hardest combination of gimmicks and win the game. The very heart and soul of the Pure Platforming here is Mega Man, but there’s so much more to Shovel Knight. Magical weapons that are used in a similar fashion to Castlevania’s subweapons. Townspeople who give you clues and sell you things, a la Zelda II or Wonder Boy In Monster World. A world map not unlike Super Mario Brothers 3. Hell, even the mechanic where you have a chance to regain the money you’ve collected if you die by making it back to the same spot you died on the next life invokes a little Dark Souls. It’s easy to just list out the inspirations, but they all fit in flawlessly and combine to give Shovel Knight its own identity.

It’s a near-perfect game. My only reservations were with a few of the later bosses; they have a stable of attacks to use to try and kill you, and sometimes they rely on instant death hazards during the fight. One boss creates spikes, another is fought in an air stage and creates pitfalls. The final boss especially is devoted to destroying your footing, and that really doesn’t sit right with me personally. These were the only parts of the game I felt were “unfair”, but Shovel Knight doesn’t run on a lives system. There’s no game over; the only punishment for continued death is losing out on the treasure you’ve collected in a level. Which is fair! This is a fine mercurial product in the world of video games, and one well worth its price point. Yacht Club Games have discovered the secret to alchemy in video games; an experience that invokes the power of the past without letting the past come in and overwhelm the future. Go get Shovel Knight. Play it and love it, then wait with anticipation to see what equivalent exchange the alchemists cook up next.

MATTO’S OPINION ON THE GAME

Since FreezingInferno discussed most of the ins and outs of Shovel Knight, this part will detail my experience with the game.

Shovel Knight shocked me. It really did. It shocked me by how fun it was to play and how it mixed several old-school NES classics into one experience. Then again, the developers are former Wayforward Technologies employees and we’ve seen them work magic when given the time and effort to do so (hi Contra, DuckTales and Shantae!). In fact, since the release of this title, I could say it gives Nintendo’s own indie offerings (most notably NES Remix 2 which I just reviewed) a run for its money.

Why though? I put ‘fun’ in italics for a reason, its REALLY fun to play and it controls tight. The level design is absolutely baller, the in-game sprite design is fantastic for both the backgrounds and character designs, and Jake Kuffman’s 8-bit soundtrack takes a massive shit on any recent triple A budget video game’s soundtrack. You know those soundtracks I’m talking about, where they pretend to be big Hollywood epics but are absolutely boring to listen to. The theme for Mole Knight’s level is my absolute favorite in the game.

Shovel Knight is available for $15 on the 3DS and WiiU eShop alongside Steam if you are interested.

One thought on “Let’s Shovel Up A Guest Review For Shovel Knight!”