Cubemen 2 is an ambitious title just released on the Wii U eShop that hosts 3D strategic battles over multiple platforms and game modes. Developers 3 Sprockets and Nnooo have got together to make sure PC and Wii U gamers can do the same. This means PC and Wii U owners can not just create and share levels with each other, but also play directly online whether you’re sitting at your desk or on the couch, or even the toilet thanks to the Wii U GamePad. Just like your dinner, this game is extremely open and customisable; and while it does boast a solid campaign and single player elements, the focus is on the player and what kind of experience you want to create. There is soooooo much to say about each game mode I could flood you with a few paragraphs on each one, but I’ll just talk about my own experience so far and explain the core gameplay and features in detail. 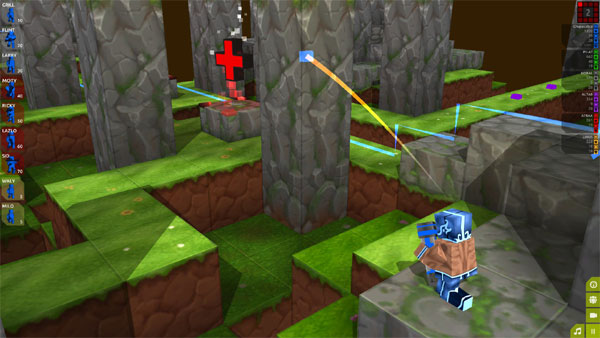 The first thing that struck me is how much of a Wii U game this is. That sounds obvious, but a lot of developers are too scared of the GamePad’s touch screen to use it properly, whereas Cubemen 2 uses it almost exclusively for control and benefits a great deal from it. Within minutes I was manipulating the camera with the analog sticks to get a great view of the level, and ordering troops around with the touch screen at the same time. That might sound convoluted but it feels very natural and being able to select things quickly is essential to being a strong Cubemen commander. When things get crazy on the battlefield you quickly find out how important it is to have fast touch controls and a proper view.

I haven’t played many tower defense or strategic games in general because the slow pace doesn’t usually engage me. I thought this would be a similar case but I found out how wrong I was pretty quickly. From the word “GO!” the map comes alive and your first actions are quite important in establishing a solid defense or attack. Scanning the level for the best high ground and potential enemy approaches, you’re faced with the choice of putting several Grill’s (cheap, standard soldiers) into action or laying down a well placed expensive Sid (sniper) or Ricky (rockets). The significant difference to a tower defense game here is your Cubemen are free to move and regroup instead of being stuck in the one place, and it’s more like Pikmin with guns. That’s a horrible thought and the gameplay is nothing like Pikmin, but your troops are just as loyal. Once the troops are created and deployed you still have a few creative liberties to take with them, with the ability to upgrade them, sell them back or have them focus on a particular type of enemy troop. When you buy an upgrade for a unit their stats will go up, improving damage inflicted and range. They’ll also have their health restored so sometimes it’s worth waiting until they are very low on health to give them a new lease on life. A bit harsh for the struggling Cubemen but that’s how we grow and learn.

While being defensive might be easier to wrap your head around, the gameplay has an excellent system in place to reward aggression, giving you more points if you are closer to the enemies base when you kill an enemy. Points are then used to buy even more troops to quickly plug holes you might have left in your defense, or attack with even more force. Aggressive strategies can definitely backfire but I’ve found there are a few ways to recover if you get creative with placement. Waly is a very cheap unit that can be permanently placed down to create a wall and change the terrain, so you can manipulate the enemies to walk right into your vantage points. Milo is also a very cheap troop who acts as a landmine, and I laid down about 15 of them around my base in desperation once as troops started to overwhelm me. It’s heartbreaking to see Cubemen blow themselves up with such explosive loyalty, but when this strategy actually worked I was so proud of them, and I knew this was my type of strategy game. 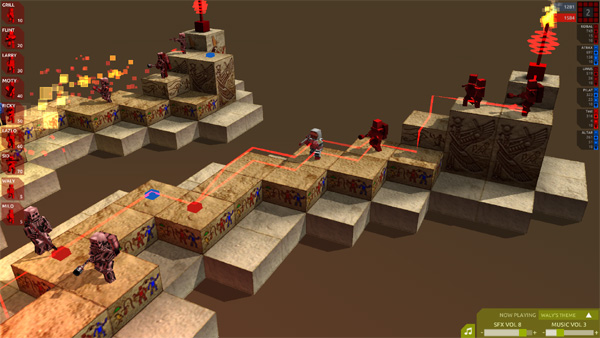 The music isn’t amazing but does provide a steady motivating beat with a decent riff to get you pumped for action. The game’s pace is relentless so it’s fitting, and you can switch music on the fly during gameplay with one of the many customisation options on the screen (without even pausing the action). There’s about 6 variations of the Cubemen theme and I find it satisfying to switch the music when I start to dominate the battle, just to emphasise the feeling. The enemy probably can’t hear it but all their Cubemen are going to die anyway. Hahaha.

The level editor is pretty damn amazing and gives you a lot to think about. The controls and interface are extremely good and they’ve done a great job making it accessible. You can drag blocks and change the height with simple arrows and there’s separate icons to bring the entire terrain up or down with a click. It’s also really nice to do this entirely on the GamePad, because it means you can take it to your desk and get a perfect reference picture for a design. Things get tricky when you have to place the bases down and think about actual gameplay balance. I was told about 20 times that my map was invalid because bases were too close or because there was a teleporter too close to them. Easy fixes in most cases, but I wish there was a way to make a map that was -only- for Defense Mode so I wouldn’t have to compensate every which way.

There’s a ton of options in terms of the visual feel of the maps and it’s nice to see different shades of colour at different heights, giving that little bit more motivation to create something special while carving the terrain up and down. There’s some pretty amazing stuff on the Miiverse already with thousands of designs to play, and once you play a level online you can store it in your favourites to play whenever you want. Here’s my first tardy effort making the Monado sword from Xenoblade. The height on one side gives the gameplay a bit of depth forcing troops to walk around the edge of the blade as enemy numbers grow stronger in the distance. 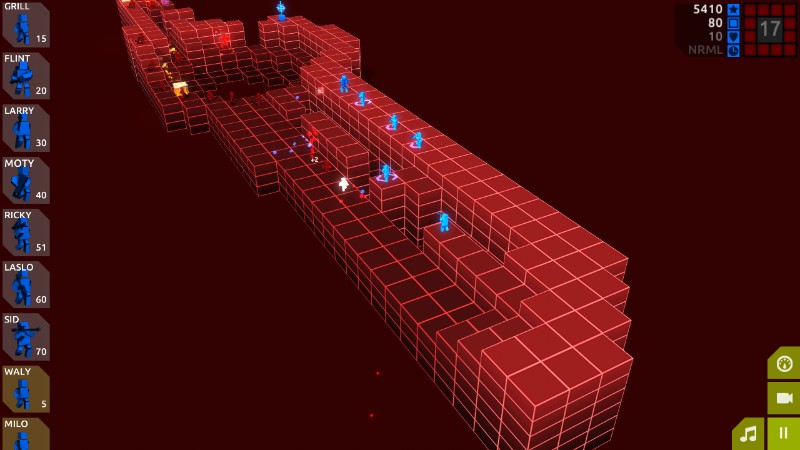 I’m extremely impressed with the scope of Cubemen 2, there are so many more modes including Capture the Flag and King of the Hill it’s going to take weeks for me to fully wrap my head around this game. There’s online rankings, stats, achievements and tons of options for adjusting audio output and camera speed / sensitivity. You can also put different designs on your Cubemen to bring some swag to your strategy. It’s a huge accomplishment to see cross-platform multiplayer up and running too, I think this is the kind of direction gaming needs to go to bring more people together. Unfortunately people aren’t playing and it’s been difficult to find a match so far. I’m hopeful it’ll pick up because the game is fairly cheap ($10.49 AU / €7.99 / £6.99 / $7.99 USD) considering how robust it is, and I think people are a little ignorant of Wii U eShop games because outside enthusiast websites, there’s almost no coverage. It’s up to enthusiastic gamers to change that. Cubemen 2 isn’t very visually inspiring, but all the ingredients are there to extract your own flavour out of it. It’s the kind of game where you can get lost in your own head until you’re dizzy and realise a few hours have passed. At its core it’s nothing revolutionary, but a stimulating strategy game with solid game mechanics and almost never-ending content, which takes advantage of Wii U’s strengths to provide a very smooth experience.

One thought on “Cubemen 2 – GamePad Warfare”