I love the new Smash Bros on both 3DS and Wii U, let’s get that out of the way. The new characters and stages are great, movement and overall balance is fantastic and the gameplay is satisfying and refined. However, there’s one thing I need to get off my chest that has made much of the game unpleasant for me.

All. This. Bullshit. In the way.

I’m sick of it. Too many games are starting to come with a quasi-RPG grind fest attached to them, and it’s unnecessary. Hyrule Warriors was the first game to really bug me about this last year, it’s a great game but I feel sorry for the people who sunk 300 hours into it just to get a few costumes and weapons. I don’t understand why this is accepted gameplay design, doing the same thing over and over. You can say all Dynasty Warrior games do this, and I will counter that by saying all Dynasty Warrior games are broken pieces of shit. If I’m playing a game for a reason other than a stimulating challenge or having fun, then it’s poorly designed because I may as well be at the sawmill throwing wood, earning money to buy games that don’t insult the player with meaningless progression. Smash Bros hit closer to home with this design because this is a game I actually enjoy playing with friends, and I feel like this design encourages anti-social behavior.

The beauty and magic of Smash Bros is that every match is different. Even if you’re picking the same stage and the same characters, different shit’s gonna go down. Two to four people going at it, trying to outsmart each other. It’s beautiful and entertaining. However, when you take out the other players you’re left with some of the worst AI ever programmed for a videogame. CPU opponents in Smash 4 are absolutely brain dead when they try to attack you. However, when it comes to dodging and running away, suddenly they are Olympic athletes. Even level 1 CPU’s can pull off frame-perfect air dodges just to be little bitches and delay the inevitable. Try playing Gaur Plains with 1 CPU and you’ll spend 30 seconds chasing them around the stage before the match even starts. It’s like they actively want to leave the videogame. This problem is further magnified in timed challenges like Crazy Orders when stage choice is a roll of the dice and big stages become a pain in the arse. The CPU being so defensively focused surprises me, because it’s the most boring possible way they could have been made. This game at its prime in competitive online play or local play with friends is very offensive, fast and flowing. The entire user interface of this game is the opposite of this.

Classic Mode is awful and should be deleted from the game, there is nothing classic about getting random prizes, surviving 8 man shitfests and betting money on a slider. You have to fucking pay in-game money just to play the game on a decent difficulty. Just bought some cool trophies? Played some Crazy Orders? Sorry, you can’t afford to play Classic Mode. That is probably the only Classic thing about it, inserting currency like an arcade game. This would be super cool if you didn’t pay $50 for the game ALREADY. It’s basically the worst of both worlds combined. How many steps does there have to be?

This game is another victim of Masahiro Sakurai’s modern design idea of tightly-packaged garbage, the same thing he gutted Kid Icarus: Uprising with just to make sure you never play it again. To their credit, both games have a lot of great customisation options, but to unlock them you pretty much have to trade in your brain cells. Classic Mode’s structure is simply to “survive” the random shitfights until you get to the predictable boss patterns. I think Master Fortress is quite fun, but it’s not even worth getting there. If you want to beat one of the higher challenges on the challenge board, you have to be stupid enough to play Classic Mode through to the end 49 times (every character). 98 times if you have the 3DS version too. Probably even more if you want all the custom headgear, moves, hats, trophies, whatever the fuck else pollutes every results screen. 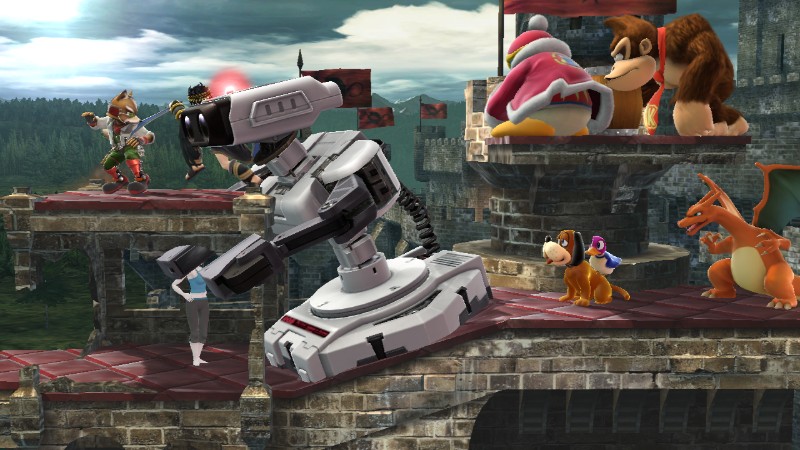 This wouldn’t be so bad if Classic Mode was at least fun and rewarding to play. Instead it’s an awful mess of CPU’s break-dancing and falling over each other, almost mocking you for putting yourself through this. For some reason it picks the smallest stages in the game, has random weapons that can kill you in one hit, and throws you into 8 player brawls. So if you dare challenge yourself at 9.0 while playing for a bit of a thrill, enjoy having zero control over the battle or just holding shield the entire time. It’s either too easy, or it plays itself. The only thing consistent about Classic Mode is how miserable it is. If it really was Classic Mode then I’d be more interested in my score like in Super Smash Bros. 64. That game had a solid emphasis on gameplay with actual score bonuses on the screen instead of a list of hats.

Sure, you don’t have to actually do the challenges. “Nobody has to do any of this, the game is perfect” you say as you stroke your Marth Amiibo. You’re right about the first part. After collecting all the music CD’s I have declared the game complete and closed the challenges menu, but it still bugs me for being part of the experience. At least 50 hours of my game time were dedicated to unlocking stuff. It’s like having a big dildo glued to your desk, you don’t have to look at it. Your computer and books are still on the desk and function the same. But the stupid floppy distraction still affects my experience and I’m gonna need tools to remove it.

Another kicker is I actually enjoy some of these modes in Smash, on occasion. The Home Run Contest, Target Blast and Trophy Rush are unique ways to position your fighter and approach the battlefield. But when I’ve done it 49 times and still have trophies to collect, it’s just getting in the way. When the game launched I saw 13-14 people on my friends list playing the game with no online rooms open. Let’s just play the game and ignore this shit, please. I’m not even going to get started on Smash Tour and All Star mode. Both a potentially longer grind than Classic Mode with their own awkward design choices, but since I stopped playing those early I have no personal hatred for them.

Overall this article is a big load of empty rage and nothingness, and as a result I feel I have captured the Smash 4 single player experience. A lot of people might not agree, but this is just how I feel about the games I’m playing. I’ve seen a lot of gamers, let’s call them “Trophy Hunters” who just do whatever the game tells them without question. I’d rather be playing a game, than sitting there while the game plays me. It’s simply a waste of time. In RPG’s it’s different because progression is tied to strategic battles as your characters grow and move to different places, the whole genre is dedicated to that so I’m fine with it. However, in action games it simply has no place. Progression does not have to be displayed on the screen, you feel it inside your brain when you figure something out. When that stops being the focus of games we are in trouble. The best thing to do now is forget this post exists, forget Smash Bros has a single player mode, and enjoy one of the greatest fighters ever made the best way we can.