After my descriptive hands on at the EB Expo, you want more? Well alright. I got a New 3DS for myself at the end of last year, so I’m in a slightly better position to talk about it now. Living in Australia, I had the privilege of picking a regular sized New 3DS model on a regular Monday in 2014, in a regular Target store. XL was an option, but it’s just a personal choice for me to not have a gigantic screen on a handheld. This is my second 3DS since my launch model in 2011 so the upgrade was a big deal. Since I’ve had it for about a month now I feel I can give a fair assessment on how it handles and how my gaming experience has changed. Let’s start with the very first moments, as I invite you into my New 3DS journey.

New 3DS in hand, the excitement was tangible as I walked out of Target towards the carpark. Passersby looked at me in envy, I could tell they were thinking “wow, that handsome man just bought a New 3DS“. There was no time to mingle, as I was on a mission to make sure my New 3DS was properly functional; I didn’t want to buy a dud. After getting comfy in my car I slid the New 3DS out of the plastic and unfolded it. There it stood in my hands, solid and proud. I was relieved to find it wasn’t a cheap piece of crap, it had passed my first test. Flicking it on, I searched the screen for dead pixels or faults. So far so good, although it was a little dark. I found that the new auto-brightness feature was the cause of this. Considering I was in a dark carpark with a roof, it dimmed the screen to match the ambience. A clever option, but I immediately switched auto-brightness off just to bask in the true power of the screen, very impressive. The size of the screen was another thing I immediately noticed, not much bigger than my old 3DS, but big enough to feel different to my eyes.

While the unit itself felt good, the first true test came when I put Smash Bros in. After a single quick Stock match I was absolutely blown away. The 3D was much different and due to the coherency of the image it felt like I was playing the Wii U game in my car. Controls worked flawlessly, which was noticeable for me because I could finally control Yoshi properly with my new analog nub (note: my old 3DS nub has fallen apart). I’d always enjoyed 3D on my 3DS, but it felt compromised in a way because sometimes you had to “work with it” and be conscious of your position. This was a whole new experience as I played quite hard and the stages 3D effects never fell apart, Rainbow Road in particular looks absolutely amazing. I played about 10 matches right there in my car just because it was so much fun and it felt like I was finally enjoying the game to the fullest. 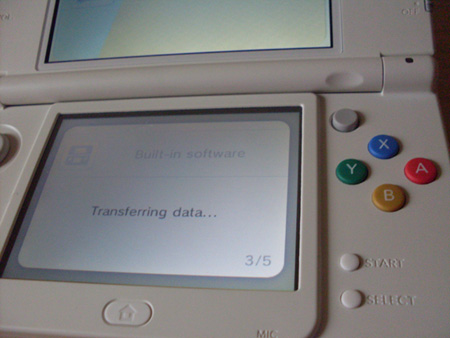 All was good and I was very happy, so after a nice drive home it was time to start the system transfer from my old 3DS. The mere thought of it was intimidating, what if I lose my account? What if there’s a problem? What if the world blows up and interrupts my WiFi connection? It turned out incredibly easy, and the steps are very well explained. It gives you the option to copy all the data directly from your old 3DS (with SD Card inserted) to the new microSD card (while inside the New 3DS), or you can do it yourself via PC methods simply by copying the files, while the transfer only copies the essential account info. I opted to transfer the data myself, just to make the actual WiFi account transfer quicker and less intense. After backing up the SD Card (which I didn’t need to do yet, but better safe than sorry), I began the account transfer and it was done in roughly 5 minutes. What a relief! After this it tells you to copy the data over, and this part took 2 hours for me because my PC had to read the microSD through an adapter, which just meant the files copied very slowly. It’s a bit of a pain, but this was the safe easy part so I was content to wait. After it was all done, it was exactly the same as my old 3DS. Same menu, same activity log, same content. Success!

After this I went rampant testing a bunch of games, and the most impressive so far is Ocarina of Time. I always had trouble getting into this game on 3DS, just because it felt a bit too small and shaky. It suddenly feels playable and almost like it’s been remade again, I’m so happy I can actually enjoy it now. The 3D is miraculously perfect and the screen being slightly bigger has made a surprisingly big difference too. It’s a whole lot of small things, but they all add up and I feel like this is the definitive version of the game now. Mario Kart 7 also blew me away in first person view. I must have gotten used to the track being blurry and not looking at the sides too closely. On the New 3DS however the track stays absolutely still and it feels like there is twice the detail to take in. As a result the sense of speed is enhanced and I spent a few hours playing online with a huge grin on my face.

After a week or so the honeymoon period was over, and I noticed the first flaws. A floppy screen and less tactile dpad had me wondering how I didn’t notice these in the first place. The screen hinge flaps just a little bit, but I started noticing it as I crept into more unusual positions, as me and the New 3DS got more comfortable with each other. No matter where you click it in, it flaps in a small window, up and down. I never had a 3DS XL but apparently this was a problem on that too. I read around about it as much as I could, and it seems like a design choice to prevent screens snapping straight off. I think it’s a bad move, but after noticing the flapping I’ve gotten used to it. Not ideal but I don’t feel bad about it anymore since I’ve gotten used to “resting” it in one position. The second problem with the dpad isn’t so big either. When I’m not playing a game and simply pressing it, it just doesn’t feel very responsive. There’s no click as the pad is very condensed into the system, barely emerging from the normal surface. When playing a game however, I have never had a problem and forgot about it completely. I played through Super Mario Bros from start to finish (warpless) to make sure, and it was great. It’s responsive, just not hugely satisfying. Given the choice, I’d take the original 3DS dpad but nothing is perfect.

I’m also not too fond of the slightly dubious way to remove the microSD card. It requires unscrewing the back of the system with a very small specific screwdriver, which luckily I had but some people might not. I don’t even know the name of it because it’s not standard, but it’s slightly smaller than what you need to open a Wii Remote, which is a bit annoying. On the plus side, this makes sure the microSD card will never get lost and keeps the back faceplate on very firmly. The faceplate on the front slides off without the use of tools. I don’t have any alternate faceplates yet but the option is pretty cool.

The new “second stick” on the top right is something a lot of people have been talking about, but to me it may as well not exist. It’s a rubber nub sticking out that can not be moved and senses movement sliding over it. I don’t know if that’s true because I can’t get it to work. It feels horrible and is way too small for me to take seriously. I have about 50% success rate with doing Smash attacks with it in the right direction and have not been compelled to use it in another game. I’ve read some people like it so maybe I’m just too dumb to figure out how the input works. It’s just plain unusable to me, but I’ve never felt the need for a second stick in any game so I’m OK with that. The only real issue I have is that it encourages lazy game design, but that’s a topic for another day. I have never used the secondary L / R buttons in anything either. They simply exist.

The New 3DS also has a bit more power, but since there are no games that take advantage of it yet it’s a bit of a fruitless talking point. I have noticed a significant change in the Internet Browser, with Twitter running with no lag whatever. It scrolls even faster than my laptop does now, very smooth and functional. Menu operations are generally faster, and now I have enough time to go to the HOME menu and change things between online Mario Kart 7 races. That’s something I could never do before due to the small load time differences, it used to disconnect me from the race before I could get back. That’s about it, I have not noticed games loading any faster, Smash Bros was the obvious one I tested and no change. It might be slightly faster but I haven’t tested it thoroughly with a stopwatch, because it never bothered me in the first place.

Overall I’m very glad I got a New 3DS, but I don’t see it as a necessary purchase if you have a functional 3DS already. It makes just enough changes to feel like Nintendo’s best handheld to date, and it reminds me of the DS Lite days of absolutely perfect handheld bliss. To note some other small improvements; the speakers are louder, the camera is better, the primary shoulder buttons feel better, it’s more comfy to hold, and it looks better. One significant thing I should mention about the screen, is that the lines on the side are gone. The original 3DS had a huge design flaw of stabbing its own top screen with the bottom screen. This one is completely smooth in that regard, and I never have had to wipe the top screen. To conclude, New 3DS is an improvement in comfort and quality of life, it’s not completely necessary to upgrade but you wont regret it if you do. I think the experience will differ greatly depending on what you want in a handheld. As with all things, use this info wisely and go with your heart.