Nintendo’s been distributing *HELLO* demo codes for The Legend of Zelda: Tri Force Heroes on 3DS and *HELLO* I’ve been lucky enough to get my hands on some from Nintendo Australia. I say lucky because their *HELLO* email system is shitty and unreliable, and these are seemingly distributed randomly. With the death of Club Nintendo it seems they’ve finally fixed their database and I got my first *HELLO* email from them in months. Anyway, I’m needed in the Drablands!! *LET’S GO!*

The second I jumped online with this game I knew Gestures were going to be a riot. They *HELLO* smacked me in the face with their funny and exaggerated presence. Gestures are icons on the touch screen, and they’re your primary means of communication with the Unknown Heroes you are teamed up with. When you press one it appears above your head on the top screen. In a co-op game this is basically part of the gameplay. Yes, that means there’s no voice chat but I honestly think this is way more entertaining. Firstly, because voice chat on the 3DS is fucking horrible. It’s a garbled, crackly mess and with strangers would lead to just as many miscommunications, especially across different languages. Secondly, these gestures are so much fun to use and the images look hilarious. Link looks like a cocky shithead with the “Thumbs Up” icon, and he looks so cranky in the “Nooo!” and “Over Here!” icons. The shrug shoulders icon also looks really dumb and innocent, and I used that a few times when I hurt myself. Shit happens okay guys? I am a BRAVE WARRIOR, that’s why I ran into the fire. Anyway, they are just great and Tri Force Heroes uses the expressive Wind Waker art style very effectively. I was laughing almost the entire time playing this game. You get 6 gestures in the lobby like “Hello“, a goodbye “Gotta Run” face with no text and a few others. Then during gameplay you get 8 more useful gestures like “Totem“, “Item!” and “Throw!” as shown in the screenshots below.

My first experience was a bit disappointing. Me and the other heroes entered the Fire Temple (the final of 3 levels in the demo) and it turned out someone was standing completely still. There was also heavy lag, and my movement was stuttering with constant freezes and loading symbols. Me and the other active hero spammed the “Shrug Shoulders” and “Over Here!” gestures until eventually we got disconnected. It was like a sweaty night at the club where you get separated from your friends and a few hours later find yourself in a big hall with a Triforce symbol. That’s fine, I thought. Just a demo, not perfect, some people have shit connections, and I was playing the whole of Europe (from Australia). This happened a few times in the Splatoon Test Fire and the game turned out perfect for me online. Thankfully though, the rest went smoothly! 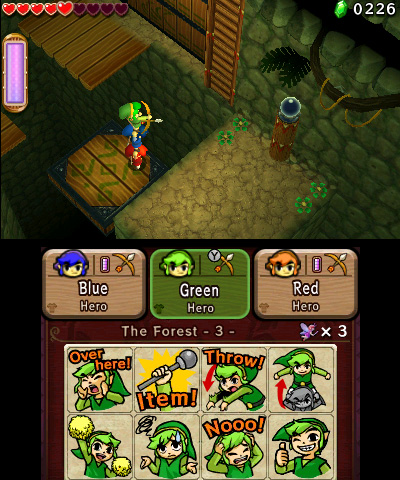 My first real experience came next, with two Unknown Heroes who clearly were as excited as me. We all said “Hello” and went straight to the upper Triforce in the hall, pressing “Let’s Go!” in unison as we positioned ourselves. We then all picked the first stage and the fun began. There was a tiny bit of movement lag but it was very playable, about what I expected really from the start. We started the first dungeon and I had no idea what I was doing, so I just grabbed them and threw them around. It seemed like we were all just figuring out the buttons. We were all just spamming gestures, running around and swinging our swords seemingly with no thought. In Tri Force Heroes you can all stand on top of each other in formation to reach high objects, and this is called Totem Time! After some awkward throwing, grabbing, and fondling, I finally figured out how it works. The person who presses A to grab someone, ends up being the bottom totem. So the bottom player moves all 3 of you, while the player on the top (2nd or 3rd depending on how high you want it) is the only one can use their item. This is important because sometimes you’ll need a specific player on the top depending on the item they picked at the start. Anyway, I’m not gonna explain every puzzle but we slowly pressed on and got better with each room. Items were thrown, switches were pressed, enemies were taken down. It slowly started to make sense. When we needed to form a totem we would press that icon, and the “Item” icon if we needed somebody’s item. We all started to understand each other.

After clearing the 1st dungeon, we all had such a great time that we stayed in the lobby and played the 2nd and 3rd dungeons together as well, urgently rushing to the Triforce at the top and pressing the “Let’s Go!” icon. Some of the puzzles actually had us stumped for a few minutes, and we were shrugging and saying “Item!” and just trying everything we could. I wouldn’t say any of them were specifically hard or convoluted, but when you’ve got 3 people doing their own thing, the thought process is a little more complicated. There was some sloppiness, like someone grabbing me when they shouldn’t, and accidental hits, but it was all part of the process and led to more funny moments than doing the right thing would. When we finally solved a clever puzzle (pushing a block in the Fire Temple took us forever to position ourselves) we all pressed “Thumbs Up” together and it was glorious. If you press the Gesture over and over, the icon gets bigger, blowing up like a balloon. It also plays triumphant musical notes when you expand the gesture, like the Wind Waker combat strikes. The sole purpose of that is to express how excited you are. You could tell how excited and happy we all were just by the icons on the screen. 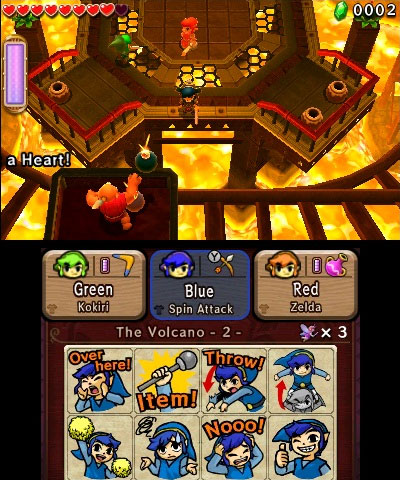 We did suffer a few deaths on our journey, and everyone let out a “Nooo!” . The person who died would shrug their shoulders as if saying sorry, and so I made a quick “Thumbs Up” to tell them it’s okay. It was amazing how fast our communication evolved. There was also an enemy fight where something happened and we made a “Nooo!” sound at once, but I hate spoiling specifics. We all shared our feelings on the matter in the most comically exaggerated way, and it was just nice to feel like we were on exactly the same page with the same goal. Obviously voice chat would be more effective, but it would also take some of the problem solving out. With friends though, I’d definitely try voice chat just because my friends are awesome. That’s why we have wonderful things like Skype which I recommend using for any console / handheld game, really. I can’t think of a single game where the in-game voice chat is worth using over that.

Tri Force Heroes is SO MUCH FUN and I’m dying to play more now. I can’t wait to see the rest of the stages and play with more people. The game just has a fun vibe to it, telling you not to be “naughty” and providing random stuff to do in the hall like juggle something in the air with your sword. The Links also look funny when they run, nothing intentionally comical but they look like really excited kids. The game oozes expression from the art style, to the dialogue, to the customised “dresses”, and the music compositions I’ve heard so far are fantastic and lively. This is really its own brand new game world. The biggest problem people might have with the game is finding people to play with, but with gestures it’s a fun game with strangers. After a few rooms they won’t feel like strangers anymore, that’s the beauty of Tri Force Heroes. Sure you’ll get the odd moron, or person with a bad connection, but obviously that party wont last very long and welcome to online gaming. I imagine it’d be the most fun in local multiplayer, just because there would be no lag whatsoever. Looking forward to trying the full game and seeing what else is in store. I also have one more demo code for any opportunistic Aussie who might see this post in the next 2 days. If you’re not sure what to expect from this game, the demo will definitely give you a good idea.