I’m going to make this short because The Swapper is a shit game and I don’t want to waste more energy on it. I’m very busy you see, with superior games like Witcher 3. I’ve spent the last month playing The Swapper on and off, desperately trying to find something interesting to say about it, but there’s just nothing. It’s a puzzle platformer where you create clones of yourself to solve puzzles. Yep an Indie puzzle platformer, what a refreshing addition to your game library in 2015. It’s the “I want to be a game developer” genre, but this game somehow got lucky and became a huge hit with critics. Scores from big mainstream outlets ranged from 8 to 10, and the only reason I’m writing this article is to tear that shit down and put it into perspective. 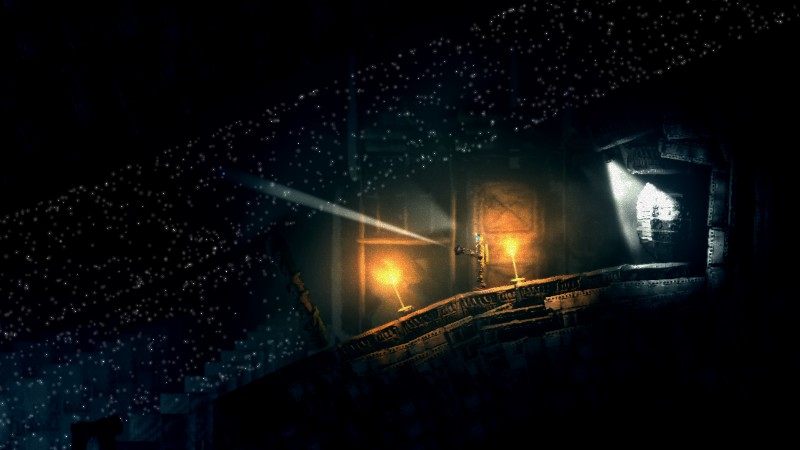 The Swapper is a 5 hour game with 1 game mechanic recycled over and over. It’s the kind of game mechanic that would exist in ONE level of Yoshi’s Woolly World or Super Mario 3D World, and slowly get more complex throughout the level. Here it is stretched throughout an entire videogame and after an hour, you’ve probably figured out how to solve every puzzle. Basically you create all your clones, put them on switches, and they just add one extra step with every following puzzle. You might have to create a clone while falling, and time slows down while you project the Swapper light to allow this. Dont ask me why, it just does, because videogames. This can lead to some awesome moments where you have to kill your clones and project yourself back to safety while falling, but that’s probably the only enjoyment I got out of the game. My enthusiasm for this mechanic soon faded when the entire layout of the game’s overworld came to depend on it.

The story is absolute trash and the first problem is the dialogue. It’s the kind of writing that bothers me with its transparency, because it contradicts itself just for “the feels”. An example of this is the very first log in the game, where a scientist says he wants nothing to do with this “Swapper device”. The very next sentence has the scientist questioning why the Swapper device has so much security. We’ve just established that you’re scared of it, and now you’re asking why you should be scared of it. It’s dangerous, yet you don’t care about exposure to it? Okay. This might sound insignificant but I felt immediately disconnected from the story and this is just one example of something that happens all throughout the game. It’s so blatant that if you asked me for an example of bad videogame writing, I would say The Swapper. Here we have an extremely interesting premise of a Swapper device going out-of-control in space, but they put no effort into the context of the situation. Every log in the game has poor writing that compromises the scenario for a little bit of shock value. The premise is interesting but the intent is dishonest.

Another problem is that text just appears out of the fucking blue. You get logs and transmissions from thin air without touching anything, as if they are imprinted on this bloke’s visor. It’s like the game is just telling you how to feel without bothering to design anything. Imagine lying in bed with a women (or man) and just telling them to have an orgasm. You might have the sexiest voice in the world, and they might get a kick out of being told what to do, but the experience is still not happening. Even 3 clones of yourself can’t make up for this disappointing lack of engagement.

I don’t expect a great, coherent story from most videogames, but that was obviously what they were going for here. They failed miserably. Most of the dialogue here is the kind of bullshit I would see written down and instantly change. I don’t get how this even makes it into a game, let alone gets praise from the gaming media and goes unnoticed by people who apparently were super engaged in the experience. Could I be the problem then? Am I just personally being a dick about it, because it’s a different style to what I like? Perhaps, but I can’t write from any other perspective. If this is “thought-provoking” to you then your idea of thinking is very different to mine.

Where is the fucking power button? Look at this pretentious bullshit. There were a few points where I thought I might be enjoying this game, but then the dialogue snuck up to remind me that the game is shit. I can just imagine the person who wrote that, nodding their head with one hand pointing at the screen, and the other hand over the “submit” button. A bit like me right now. The environments and camera even carry this “immersive trickery” that taints the dialogue, with the action zooming out just so the player can see an “event” your game character has nothing to do with and can’t possibly see or hear. Sure, this is a 2D game and 2D isn’t real anyway (or is it?) but when line of sight is an actual gameplay mechanic in this game, it should also be integral to the presentation of everything else. This is a broken game in its very concept and it just shows they did not care about creating a new game world. By the way, that dot on the screenshot above is the actual cursor, controlled by the right analog stick. They didn’t bother with gyro or touch screen implementation because it’s a straight port from other systems. This happens a lot, but hey, another thing to hate about this game I will gladly write down to further exaggerate my points. You can look at the map or read the shitty dialogue on the GamePad though. That’s handy.

This probably comes off as harsh on The Swapper but I don’t give a shit about the game’s feelings. It’s a harmless Indie puzzle-platformer you can probably buy for $5 somewhere. You’ll play for 10 minutes and pretend you found it interesting because it’s in space, and there are puzzles. That is the game’s place in the virtual space. Maybe you’ll be impressed by the visuals. The music? I can’t even remember it. I will never play it again and I’m sure if the devs read this they’ll just laugh. I wouldn’t expect anything else from a company named Facepalm Games. I don’t feel like this is a troll article because the bullshit double standards of the gaming media is a bigger problem, and The Swapper is not even close to a 10 out of 10 game from any perspective. You are deceiving people with a review like that. This guy compares it to Super Metroid because they are both in space. The only way I can understand this is through their eyes, it’s a perfect “reviewer friendly” experience. They can beat it in a day with little thought, and feel smart about their writeup because they covered everything. It’s fine if you enjoyed The Swapper because that’s why we play games, but it should not be reviewed or talked about in the same way as actual good videogames that embrace their strengths to the highest degree. They are a world apart in the manner in which they touch people. Rant over.

2 thoughts on “The Swapper – Quadruple Standards”