That’s right, you’ve stumbled into a writeup of impressions of a free demo. It might seem a bit redundant but this game has a special charm to it I wanted to share, and a lot of people still don’t play free demos because being active is hard. If you have a 3DS and live in Australia or America (EU release date 2016), just close this now and download the demo yourself. It’s a comfy 858 blocks and gives you 15 plays which is more than enough to decide if you like it. It’s a good 20-30 minutes of walking around town looking for Yo-Kai.

The game’s awesome production values become apparent right away with a really cool cutscene of a boy uncovering something in a dark forest. The animation is well-done and it creates a sense of wonder right off the bat. This picture is the exact quality on the 3DS screen.

After this you’re thrust into the demo title screen with catchy music, then put into the game inside the boy’s house. The boy has no idea what Yo-Kai are or how to find them, so as the player, you’re on the same page already which is a nice feeling starting a game. Upon controlling my character I was immediately impressed by the gameplay engine. The game is beautiful, movement is smooth, the 3D is deep, and you can rotate the camera left and right with L and R.  It’s a generation ahead of Pokemon in terms of movement and graphics and Level-5 deserve a lot of credit for raising the bar here. It’s closer to A Link Between Worlds than Pokemon. You can also run with the B button without needing special shoes. However, normal speed is pretty fast so I didn’t find myself holding this down the entire time, a refreshing change. Obviously there’s not a billion Yo-Kai worth of data to store like Pokemon, so the game has the “freedom” to dedicate resources to graphical polish. It’s still a strength worth mentioning. I would argue that gameplay and movement is more important than numerical depth, but they each have their strengths. I love Pokemon so let’s not get into that.

My favourite thing about this game by far, is the tangible way that Yo-Kai exist in this world. They are actually with you all the time, floating around while you move around the game. They aren’t immediately visible, but you can hold a magnifying glass over the screen while standing or walking to uncover a hiding Yo-Kai. You can also examine cars, trees, buildings and anything suspicious to scan for Yo-Kai as the screen transitions closer to the specific area. Once you spot one, you have to HOLD the icon over them as they move around, to catch them or initiate a battle. This is far more engaging than throwing a Pokeball and just watching it shake, hoping for the best. They are mostly easy to catch in the demo but there was one with fast movement, and catching it was a nice thrill. 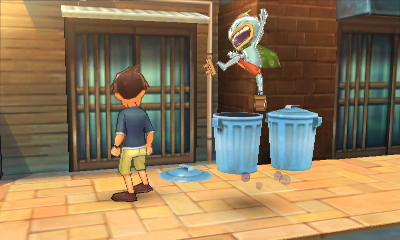 I absolutely love the concept of them. Yo-Kai aren’t just monsters, but spirits that change the emotions of people around them. For example, a lazy Yo-Kai will hang around an NPC and he’ll become lazy because the Yo-Kai is there. It’s nice to have a physical target to defeat, to improve your mood. Next time I’m feeling sad I’ll just pretend there’s a sad Yo-Kai around and flail my arms to get rid of it. Already feeling better.

The character dialogue is short, charming and funny, like Pokemon but a little more offbeat. This caught me off-guard because some NPCs sound completely generic. Dad is just reading the paper, and Mum says “good luck, come home before dark” or some bullshit. Then you start walking around the town and there’s an NPC who got his car door stuck on the wall. Someone who tells you that Yo-Kai aren’t real. A lady on a bench who tells a man walking by to get a life. An old lady making a joke about egg yolks. It’s just bizarrely engaging. People under the influence of Yo-Kai also do strange things, and that adds an interesting dynamic to the world. You’re not just dealing with Yo-Kai, but the effects they have and the problems they create. 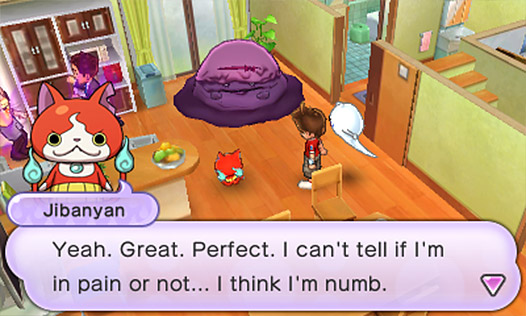 Positives aside, there’s a big reason I’m writing demo impressions. I’m not sold on the full game because the battle system is crap. It has some interesting concepts and I really like using the touch screen to execute attacks, but it’s just way too simplistic. Each Yo-Kai has one attack, and your timing and execution pretty much make no difference to the battle. It just kinda happens, and you stand there and wait until your one attack is charged again. You can drag a target around to make sure you’re aiming at the right enemy, but the demo didn’t require that ever. You rotate a wheel which decides which Yo-Kai you send out, the ones at the front can attack, while the ones at the back can be healed. Cool concept but there’s honestly no depth beyond that. I’ve been doing research into the game and it seems like it doesn’t get much deeper further into the game. Yo-Kai have stats, they level up, and even evolve, but I don’t know too much about that from the demo.

Apparently the simplistic approach is intentional because it’s “aimed at kids”. I think that’s rubbish. When I was a kid I was fully immersed in the Pokemon meta-game, happily training a Rattata to level 20 in one patch of grass. Developers need to give kids more credit because they are better thinkers than most adults, and if they start playing dumbed-down games now, they will probably be playing them later too. Yo-Kai Watch will still be an awesome game for kids, just making a point.

I think the full game would probably still be enjoyable, because the world is so interesting and everything is well-designed. It’s one of the first games in a long time that actually made me feel like a kid, and this is just a demo. It has this super comfy, curious feeling that made me play through the demo 3 times on different days, just because it was there. I might get it eventually because I would just love to see what kind of new areas you can explore to find Yo-Kai. It’s just hard to imagine myself staying engaged in it with no difficulty or strategy. I’m literally just guessing the final game will be like this. I’m not making a final verdict based on 30 minutes, like a real game journalist would. If anyone has the full game I’d love to hear what you think in the comments. It came out 2 years ago in Japan, and already has a sequel released there which could be amazing. If they simply add some depth to the battle system it’ll be perfect. Everything else is in place for a massive hit franchise and Pokemon better Watch out. Get it? Ahah… Yo-Kan’t stop me. Alright I’m done.