Once upon a time there was a game called Yoshi’s Story on N64. Kids around the world were delighted with what they saw. The Yoshis were pursuing happiness, and trying their best. To have as much fun as possible, on their brave quest. All the young gamers had a great time. Adults too, couldn’t help but smile.

All was going great until the climate changed. The big bad internet said it’s not a good game. Without enough sequels to Yoshi games, the children of Yoshi grew up in disdain. Gamers looked down from mountains of dew, with bags of doritos to hide the truth. This article is here to remind you cunts, that Yoshi’s Story is a lot of fun. 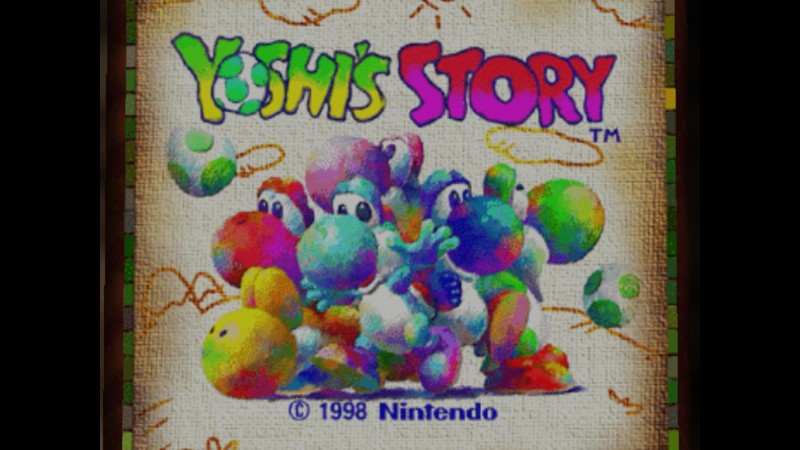 Yoshi’s Story has arrived on the Wii U VC and I’ve just done a jolly playthrough. It’s a delightful game that’s been surprising to play in 2016 in a few ways. This was the only Yoshi game I had never played before, and the first thing I noticed was that Yoshi controls a bit differently to the Yoshi’s Island style games (I would classify those as Yoshi’s Island, Yoshi’s Island DS, Yoshi’s New Island and Yoshi’s Woolly World). He’s FASTER in Yoshi’s Story and despite not having to carry a baby around, feels heavier. As a result he’s a bit harder to slow down and control perfectly, but the trade-off is worth it for the happiest Yoshi I have ever seen. The Yoshi Train just shoots straight ahead. There is nothing in a videogame that is more happy than Yoshi in Yoshi’s Story and this is why the game is legitimately great.

Yoshi’s Story’s charm is largely down to the expressive style of Yoshi and how the game consistently emphasises happiness. When Yoshi looks up he’s fucking excited with his mouth wide open. What could be up there? Something bad? Don’t fucking care, I’m Yoshi and I’m looking forward to it. 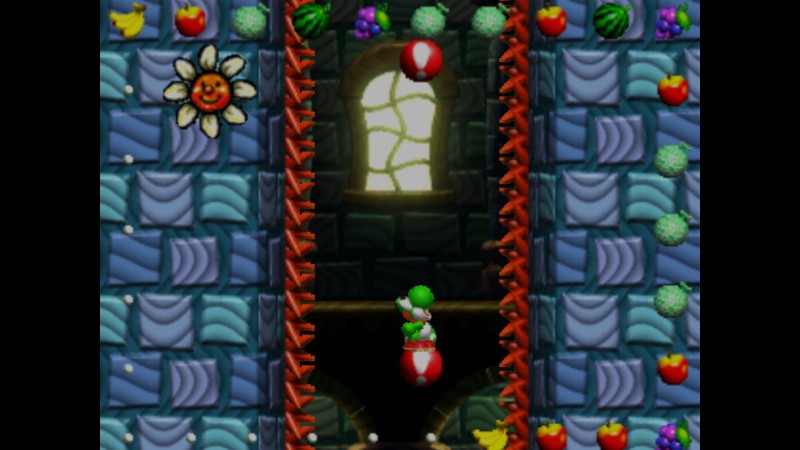 Yoshi is surrounded by spikes, but he doesn’t see them. Yoshi is looking straight up, at happiness. This is Yoshi’s choice not to be scared and it’s how he gets through the level. It’s the only way.

As someone who’s played countless hours of Yoshi’s Island and Woolly World, I was astounded by the simple fact that Yoshi’s speed in this game could be controlled with the analog stick. Analog movement was pretty much enforced on every N64 game at the time because Nintendo wanted everything to showcase their brand new analog stick. As a result this is the only Yoshi game where Yoshi can creep slowly. Yoshi’s New Island also has different running speeds, but you have to build speed (from normal run to fast run), rather than having instant control like Yoshi’s Story. This movement mechanic is extremely important to the gameplay because it lets you take your time and have more fun. If you don’t think it’s necessary, then I would argue that happiness isn’t necessary either.

Yoshi’s tongue also does more in this game with the inclusion of circles (seen above) you can grab to swing upwards, almost like grappling hooks. I was really surprised to see this, and now I’m just surprised that it’s not in any other Yoshi game. The parts in Yoshi’s Island where you have to get his head stuck in a sponge would be so much better with this tongue grappling-hook mechanic. 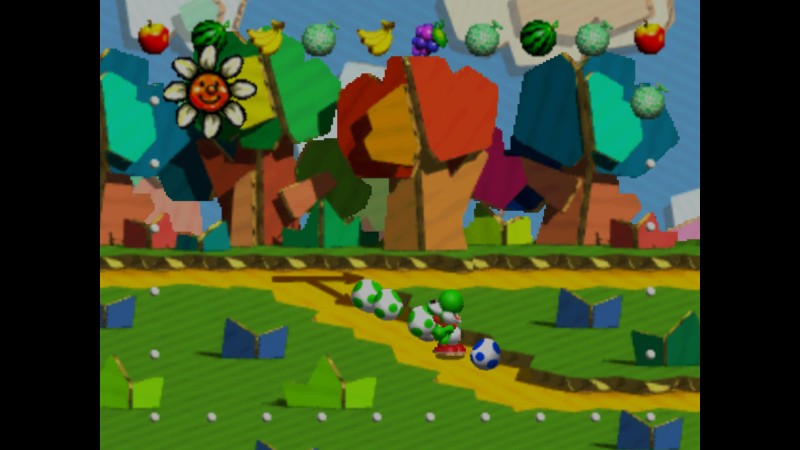 Another outstanding 3D feature is branching paths. Holy cow, look at that depth. It’s like a story book opening up! Yoshi’s looking up to try and see the other path but he can’t, because it’s in another dimension. This game might be short, but it packs in a lot of hi-technical cute ideas. You just don’t see this in another Yoshi game. You can either go up or down in some places to walk into the screen or stay in the background, and enemies will jump between paths and create a puzzle for Yoshi to figure out. This didn’t stump me, so much as surprise me because I’ve just gotten used to the very predictable Yoshi’s Island formula on a 2D plane. N64 games in general have a pretty cool habit of making the most of the space in every game. There was just no other way to impress people back then.

The next-gen 3D technology in Yoshi’s Story doesn’t end there, with egg throwing also taking advantage of this powerful 64-bit hardware. This is the only Yoshi game where eggs land on the cursor on the screen like you’re playing a light gun game. So you don’t just control the up / down angle, but how far the egg travels from Yoshi. Even though this is an impressive mechanic and WAY more complex than any other Yoshi game, it doesn’t really have any benefits. You may as well just shoot for the maximum distance every time, since the egg will still hit the thing you want. But you’re Yoshi, so who gives a fuck. Shoot closer than you need to if that makes you happy. 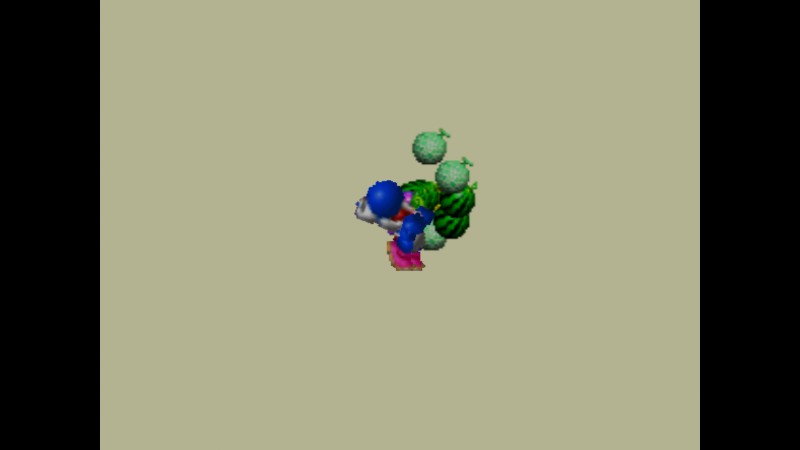 Yoshi’s Story shakes up the core structure of platformers by not having an ending to levels. A level simply ends when Yoshi has eaten enough fruit. Yoshi doesn’t stop playing for some arbitrary end goal, he just stops wherever he feels like it, with spikes and enemies disappearing the instant Yoshi eats the last fruit. This allows for different level design with paths having dead ends, existing just to explore for more fruit. After a few levels you start to realise that detours are the best way to enjoy life.

If you want to be hardcore you can also try to beat the level just with a certain kind of fruit. You need 30 to beat a level, but there’s significantly more than that scattered around for the Yoshis to find. The results screen also doesn’t show a score, but Yoshi’s Mood. This is a lot more important because if you don’t get enough points, Yoshi won’t be happy. 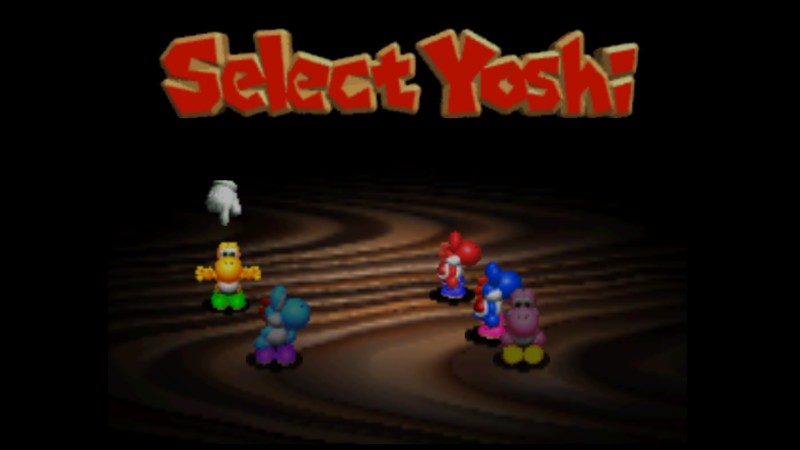 Wait a second… where’s Green Yoshi? I’m sorry everyone. He died, and he’s never coming back. That’s right, this game doesn’t give second chances. When I first saw this “Select Yoshi” screen I thought it was just a cute way to pick what colour you wanted, but these Yoshis are very important. You get 6 Yoshis for the entire game and that’s it. We took lives for granted in Yoshi’s Island because there are Yoshis everywhere and you have 99 by the time you get to the third world. In Yoshi’s Story each Yoshi is a uniquely coloured being, bouncing with life, yet precious and fragile. I ashamedly got Game Over in World 6 from falling in a few pits, and when I restarted I was at level 1-1. The short and easy stigma of this game was shattered in that moment when I had to replay 5 worlds. Yoshi’s Story is real life and the risk of death makes a lot of late-game challenges really scary even if they aren’t too complicated.

The soundtrack of Yoshi’s Story is another strength of this game that cranks the happiness slider up to 10, and you’re hit with it right at the title screen. The music is outstanding, I don’t think it’s as good as Woolly World in overall quality but I think it’s more iconic. I wish the Yoshis would sing in more games, because they sound beautiful and there’s nothing else like it. The songs aren’t just “happy”, but I find the compositions extremely high quality. There was a lot of inspiration in this soundtrack and some strange moods in some of the worlds. The Yoshis have the CUTEST voice I have ever heard and it makes me smile every time they do something. Their little “wow” when they get health from a flower is one of the new voice samples in this game I hadn’t heard before. It’s stupidly high pitched but it doesn’t sound like Yoshi is straining, just really surprised and delighted.

Something I noticed is that when you get hit, it makes the pitfall sound from Animal Crossing. I swear it’s exactly the same sound. The *whuu whuu* wobble sound. I’m not sure when Animal Crossing came out on N64 in Japan, but perhaps in addition to bringing up Mario as a baby, we can thank Yoshi for the Animal Crossing series now too. I’ve heard whispers of K.K. Slider also being the voice of Yoshi, but let’s not get into that. This is Yoshi’s Story, not Yoshi’s Gossip. It’s all real. 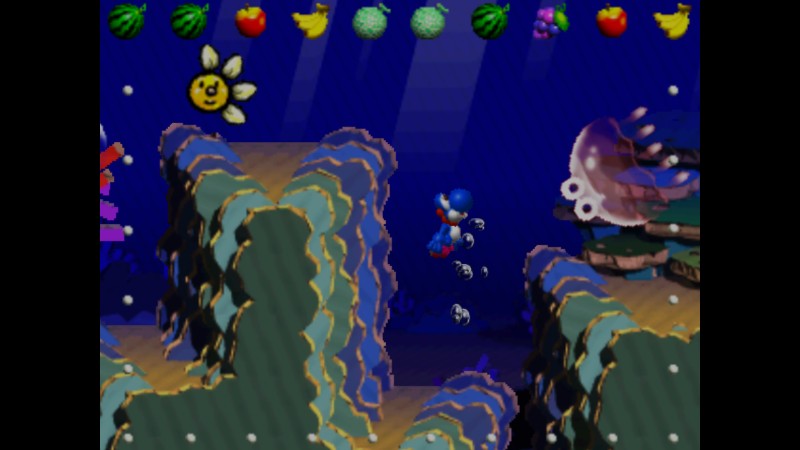 Yoshi can swim in this game and has a lot of fun underwater. In other games you would have transformations like Submarine Yoshi or Mermaid Yoshi to travel underwater, but Yoshi just does it all himself here. No complicated machines, just his arms and legs. Yoshi can move up, down left and right and also use his tongue. The controls are surprisingly stable, I think they are even better than the regular controls. The accuracy makes it pretty satisfying and easy to dive between gaps of jellyfish. It reminds me a lot of the DKC games, leaning more towards the majestic strokes of Tropical Freeze.

Yoshi’s Story is a short, happy game that’s $13 AU on the Wii U Virtual Console and plays a lot differently to anything on the market today. Nintendo made this game so kids would be happy, which is an adorable intention not many publishers would have the balls to even conceptualise. The greatest thing of all is whether you like the game or not, the Yoshis don’t care. They are just grateful and jolly by nature, and that’s a wonderful thing to be. If they were scared and cynical, would they have still been able to restore happiness to the Super Happy Tree? I highly doubt it. There’s a tangible bravery injected into this game that gave me strength, and that is also the entire inspiration for this write-up. I recommend this game if you want to feel like a Yoshi. 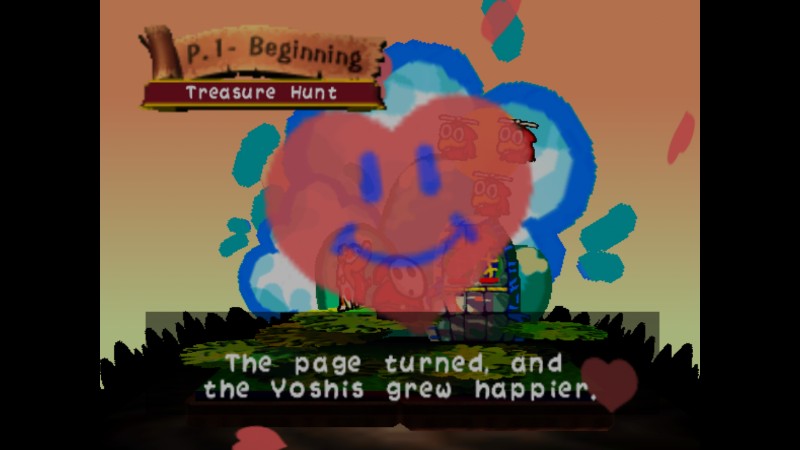