I had a windfall from my stocks in tobacco early this year and with a spare £15 I thought ‘why not invest in some Facebook advertising for that little gaming blog I own?’ Of course, I had to be diligent to not waste my spend. A cursuary glance at Pietriots reveals most of the content to be nostalgic yearning for children’s games of yonder and no amount of advertising could possibly generate any interest from stakeholders in reading these articles. Months passed, when young Bill Aurion wrote a topical and timely piece about The Legend of Zelda on the eve of the Electronic Entertainment Expo, this would be a perfect opportunity to promote content people may wish to read.

I now present the analytics of the Facebook advertising, with my insightful commentary revealing the truth about the audience of The Legend of Zelda.

Here we see where Facebook saw fit to place our advertisements on customer’s news feeds. It is alarming that only 48 of the 11,500 paid advertisements ended up on people’s desktop computers, the overwhelming majority being placed on their portable telephones instead. A close confident of mine informed me that many people, mostly communists and anarchists, install illegal advertisement blockers on their personal computers. It is very distressing to imagine a dystopian future where they are allowed to do this on their portable telephones as well.

This result wasn’t surprising in the least. The Legend of Zelda, like all Nintendo games, is strictly for children with only a few sad hangers on persisting with these frivolous games in their adult lives. You’ll notice too that these alleged adults are entirely men. When will they learn the only real joy in life comes from speculative investment into ethically dubious businesses? 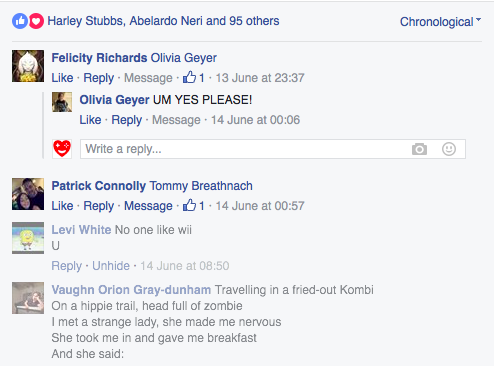 I was very distressed too by the quality of the comments. I shouldn’t be surprised though since I made the mistake of targeting the advertisement to the former colonies. Facebook amplified this by directing half the advertisements to the Irish, who long ago rejected the civil traditions of Britain. Particularly disturbing though was a deranged Australian who saw fit to type out the lyrics to what I assume is their national anthem. I cropped most of it because it was far to vulgar to read.

The most important of all the analytics though was link clicks. and these were also disappointing. 118 clicks from Facebook represents less than half the views Bill’s article received without advertising. Many Facebook suers simply ‘liked’ or ‘loved’ the post before moving on, never looking past the picture of Link scaling a cliff or reading Bill’s words. It occurred to me that many of the people who saw the advertisement may’ve thought it was an advertisement for Nintendo and not Pietriots. I have had some very difficult telephone conversations from Sony representatives who accused me of this too.

From this negative experience, and the recent fall in value of her Majesty’s Pound Sterling, I might refrain from Facebook advertising in the future. Any constructive suggestions to boost the value of this blog before we float the IPO are most welcome.

Charles, again. Do you permit me to undress you with my eyes? Ah- you wish to undress me with yours? View all posts by Charles

One thought on “Facebook advertising offers insights into the Zelda audience”