Once a year there is a tradition among gamers to sit in their house alone until midnight. No contact with the outside world is allowed, and you must deprive yourself of nutrients for the whole day before exploring a magical world at night and finding your true purpose.

Wait no, that’s just a normal week. One of these Thursday night journeys led me to Year Walk on my Wii U, as I walked all the way to the end of the eShop.

Year Walk is one of those “experience” type games. Or if you want to skip the bullshit, it’s a scrolling piece of artwork with a few puzzles. You are given a bunch of information and set off on your Year Walk journey to… well, I’m not sure. The game explains the Year Walk concept and shows a woman warning a man not to go on a Year Walk. He does it anyway because he’s bored and their relationship must not be very good.

The gameplay is minimal but I did find the interface quite well-designed. The Wii U GamePad is used in a fun way to write notes, look at a map, and read lore. It’s like a little handbook and it felt really cool to be switching through tabs while movement continued on the TV. I was quite impressed to see motion controls used to grab objects, although it isn’t perfect. It feels like a fat iPad touch cursor layered onto the TV, where you move your entire GamePad like a scanner. Even though I normally advocate fast, snappy motion controls, I actually found this a good design choice for Year Walk. There is no precision pointing required, just big obvious objects. It helped make the game feel different. I can’t imagine a starving, emotionally deprived man in the freezing cold being very good at aiming anyway.

Here’s an example of my note taking. I would give a spoiler warning, but I still don’t actually understand what happened in the game myself, so anyone who can decipher this is welcome to. 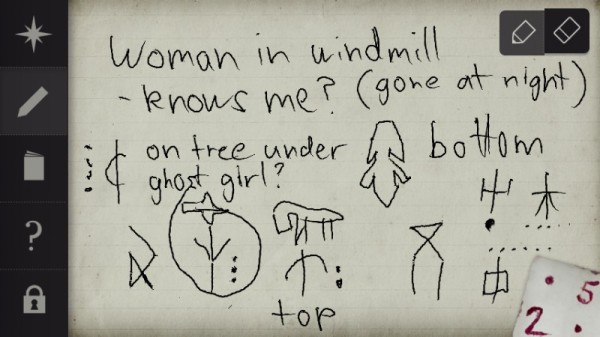 I found it a useful little reference while backtracking. You’ve also got access to a hint system there by tapping the question mark. It’s very blatant and will practically tell you how to beat the game, with as many as 8 clues for every small step. I uncovered a few and regretted it, since a few minutes of walking around would have been sufficient. That’s how I found the progression in general. You do something, then something on the map will change, you backtrack a bit and interact with the new thing, then find the next thing that wasn’t there before. A bit confusing, but the feeling of getting lost is probably the strongest thing about the game. It might have been a more engaging experience if the map was bigger and there was some kind of feeling of a long walk. It feels more like you are doing errands.

The gameplay is short and simple, but not bad. I didn’t expect much more from it to be honest. My biggest disappointment is the fact that it doesn’t expand on the lore. From the start of the “game” you are given EVERYTHING on the GamePad to read, with nothing more to discover. Year walking is known as Årsgång in Swedish folklore. It was the practice of fasting for a day, then going out at night and having supernatural encounters. I found it interesting to read about stuff like the Hudra and Mylings. You can tell a lot of these creatures are bullshit, and existed just to scare people away from doing certain things. However, there’s an odd sense of mystery that comes from just how obscure and undefined this lore is. The Church Grim for example has no consistent physical form. Could that sign post be him? Maybe this tree?

Nope, nothing. Year Walk has some weird and interesting gameplay progression, but does not contribute any further lore. Just some floating lights, distorted sounds, and a whole bunch of feels and pretentious quotes at the end. There is a secondary love story that I did not find interesting at all, but the game focuses on it all the way until the end. It just left me confused and alone in the dark. Another Thursday night.

My Year Walk was not enlightening at all, but it was different. I can’t say I’ve played anything like it, with the obscure puzzle solutions and odd form of “movement”. I’d also like to point out that this 2 hour long powerpoint presentation sits at 82 on Metacritic. So maybe I missed something, and it’s actually better than The Wonderful 101 and Project Zero. Or perhaps a game like this is very easy to play through, write about, and brag about your appreciation for videogames as an artform. You can have an expert opinion by lunch time, with plenty of time for Halo in the afternoon. For better or worse, it’s a solidly built game with minimal story and gameplay, and a somewhat interesting theme. If you’re okay with depriving yourself of gameplay for a night, then you might just have an interesting encounter with Year Walk. Otherwise you’re left with a slow cursor and a bunch of dead trees.

4 thoughts on “Year Walk – Starving on Wii U”