The big blue world was bigger than it seemed

As islands rose from under the sea

Collecting shards to see the past

Our brave young heroes were having a blast

They traveled far and gave hope to the living

Only to discover, this was just the beginning…

That’s right, after 30 hours I’ve finally seen the real intro to this game and smashed the training wheels off. The main plot is taking shape, the gameplay has become challenging, and I’ve got access to all kinds of different job vocations.

Surely you Jest? Nope. I’m a clown now and there’s nothing you can do about it. This is the first time I’ve seen actual outfits for job vocations, and I picked the Jester for my character just out of excitement for the ridiculous novelty. I plan on becoming a Hero eventually, but I thought I’d just try something new because of the costume. It’s common in RPGs now to have your appearance change on-screen, but a refreshing addition to a series that is somewhat monotone when it comes to cosmetics. This class was not in DQVI, so I’m finding some new interesting abilities too. The fun thing about the DQ job system is that when I switch to a Warrior, I will still have all these interesting Jester abilities I am learning now. People in the Alltrades Abbey are mocking me for not taking things seriously, but I know what I’m doing. There is definitely a place for laughter in the world. Now, onto serious matters.

After 30 hours I have seen a lot, but the pacing so far has been all over the place. Towns have a HUGE amount of story. I must have spent 40 minutes to an hour in each town just standing there listening to people. It sounds like a shitty Christmas party but it’s a lot of fun in this game because you’re a stranger in every town, or “offcumden” as one of the townsfolk called me. There’s a new word I had not heard before, it means out-of-towner in very old English slang. Every town in DQVII has its own dialect inspired by different European cultures, giving the impression they are their own community or country. There was clearly a ton of effort put into the localisation of this game, considering just how much text there is. The writing is very interesting, expressive and engaging and I have talked to every person in every town without getting bored. Some of the most interesting writing I have ever enjoyed in a videogame.

30 hours of stories, really man? Where’s the gameplay? There were moments where I scratched my head and wondered when the game would start, but what kept me going is how different all the towns are. The pacing changes so much that it feels like I’m playing a different game every 3 hours. 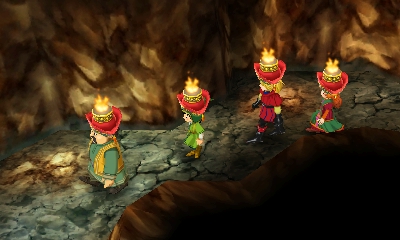 Here I am at Emberdale worshipping fire with a burning pot on my head, just so I can fit in with the crazy locals and get to the bottom of a mystery. The fortune teller in town is warning everyone of a terrible tragedy incoming, and she has never been wrong about anything before. Despite this, the townsfolk won’t believe her, claiming the fire gods would never let them down. As outsiders not brainwashed by the fire god’s lore, we have to be the ones to uncover the danger and save the town.

A few towns later, and I’m fighting off an army of mechs. I caught this guy pissing on the wall and felt bad, as he defended himself while bringing up the automaton situation. It’s a big perspective change as each town immerses you in their problems. I didn’t really mind how slow the pacing was because the game was so interesting, and it’s fun to piece together what’s happening when you arrive.

One thing that did worry me however, was the difficulty. After 15-20 odd hours I had not really been challenged once. There were some bosses, but I destroyed them with barely any effort or healing required. I started avoiding enemy encounters just because they felt so pointless, and that’s a feeling I really don’t like in a game. This is possible now because enemy encounters are not random. All encounters are visible on the field, a change made to the 3DS versions of both VII and VIII. I like the change, because it gives you a bit of control over how much grinding you want to do, and also takes away the stress of battle music assaulting you from nowhere. On the main map it is laughably easy to avoid enemies, they run at the same speed as you and it’s possible to run across an entire island without getting into a battle. One drawback is that the sense of danger is gone a bit, and that was a feeling I was really starting to miss from DQVI.

There is a lot of wisdom in this game. When people lose focus they start signing Metroid petitions instead of tackling real problems. There’s also some unexpected deadpan humour from seemingly nice characters. The game is not a comedy by any means, but it can be fucking hilarious when it wants to be.

Something else that snuck up on me was the difficulty. Almost as a response to my complaints, some very tough enemies arrived to wipe out my entire party. Welcome to the real Dragon Quest VII. Without spoiling the story, you arrive somewhere with big events unfolding, your conditions change, and enemies become tougher. I was steamrolling enemies for the first 20 hours, then suddenly I don’t have enough money to revive my party. I’m left slumming it with two people, trying to win enough fights to get money just to get a full party again. The huge spike honestly pissed me off at first, because I had no reason beforehand to grind my levels up. After forming a plan however, I beat the difficult area and felt that sense of accomplishment coming back. It’s nice to have a reason to be at your best. Finally, shit is getting real.

Here’s another new feature I absolutely love in DQVII, the Big Book of Beasts: An Illustrated Guide to Monsters. I was so happy when I got this item. The monster design is one of my favourite things about this series, and the puns in VII are fresh and fun. From the Tongue fu Fighter to the Serial Quiller I’m enjoying all the new designs. It’s hard to believe there are 321 monsters, but it’ll be fun to track down all of them and fill this book out. On the bottom screen it also shows how much EXP each monster gives, how much gold they carry, how many you’ve defeated and what items they might drop. I love when you can find stuff like this IN the game so there’s no need to boot up an FAQ.

I’ll end by talking about the story. I think it’s quite brilliant how the main plot point has built up, because I didn’t notice it at first. It starts off with one crazy guy yelling about the end of the world. Then someone mentions a Demon King in the next town, but it’s such a generic name it sounds like some sort of bogey man. Then someone mentions evil has been sealed away, but he’s unsure about it. Then town after town, you get more people saying the same kind of thing, small encounters that form a pattern. It’s just 20 seconds of text in hours worth of town drama, but it adds up. Then you start thinking about the bad things that have happened, and ask yourself why they happened. Is somebody doing this? Where are these fragments coming from? Connections between events starts to become apparent, and it creates this ominous presence of unknown evil.

I’m still answering these questions myself, and it has set a very exciting undertone for the rest of the game.