After taking control of the evil within myself, I sought out more forms of evil to overcome outside. I found the perfect challenge that comes in the form of a “Season Pass”, full of broken dreams and empty promises. The Evil Within has 3 single player DLC campaigns made after the launch of the game, and they are quite unique. I played through all three of them and thought I’d offer my thoughts. Was it worth it? Allow me to summarise my experience with each one.

I hope you like stealth… because there’s not much else in this DLC campaign. Here you play as Juli Kidman, one of the other cops that showed up to the crime scene in the intro of The Evil Within. Her version of the events is different to the main protagonist and quite eye-opening. I won’t spoil why, but let’s just say that a lot more happens during the main campaign that you don’t see. In this DLC you see more story unfold, with a couple of brand new environments. The gameplay however has a very large stealth gimmick attached to it. Kidman has no guns or weapons for the entire 4 hours of this DLC. This forces a lot of stealth elements into the gameplay, which can be fun in small doses but not like this. To me it got old pretty quickly, however I’m not normally a fan of stealth games so if you are, this could be heaven. It really pushes the boundaries of this gameplay engine and stretches stealth to the absolute limit.

Her face says it all really. This is textbook stealth just watching enemies and sneaking about, slowly moving from cover to cover. The fantastic game engine of Evil Within does ensure the stealth is accurate, at least. There’s no clipping, hitboxes are legit, and the AI is not broken. It maintains a high intensity because once you’re spotted you’re pretty much dead. Not all of it is boring as well, as there are some funny gameplay situations where you manipulate enemies with sound. You can ring phones and turn machines on to distract them, then lock them in a room. There’s a bit of fun to be had but the overall lack of control is a bit frustrating. Most of the game is on rails basically with scripted chase sequences. The best reason to get this is the added story and the new environments that look great. You eventually find an axe but it can only be used for stealth kills for mysterious reasons. Even when you’re attacked, she won’t use it. It’s just a bit hard to believe and makes the stealth feel forced and arbitrary. Recommended if you like stealth.

I’m here to kick arse and take names, and I’m all outta names. 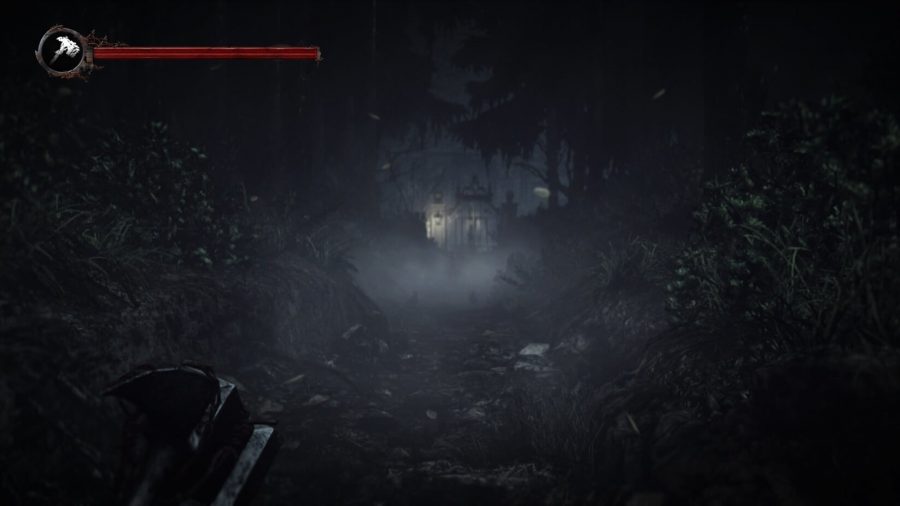 This DLC radically shifts the view into first-person and changes the gameplay to a more action-packed score-based combat slaughter. The perfect thing to play after hours of stealth. This one is a lot less impressive in terms of production value than The Assignment, but a lot more fun to play. You are a badass with an axe and you just stomp through this house trying to find your daughter. Instead of tying to the main story, this is more of a side-story that reuses environments from the main campaign. It has its own little upgrade system and a bunch of weapon options, with coins you can collect to level things up.

Your axe is your best friend, but there’s quite a few more combat options including a rocket launcher and chainsaw. You can also lay traps, pick up chairs and throw them, throw enemies at other enemies. It’s the first time you actually feel like you have “power” in The Evil Within. The combat doesn’t really have much depth outside your positioning, but it’s pretty fun. This is also the shortest of the DLCs and took me about 2 hours.  I found the self-contained story to bring out a few emotions as well, it’s decent. As this game was designed to be an over-the-shoulder horror game, first-person view isn’t perfect as you suddenly see some invisible walls and such, but for gameplay purposes it works just fine. Recommended if you want some quality entertainment that doesn’t add much lore, but lets you explore this quality game engine in a new way.

This is a sequel to The Assignment and continues the story of Juli Kidman for two more chapters. I was excited that she might finally get a weapon but no… 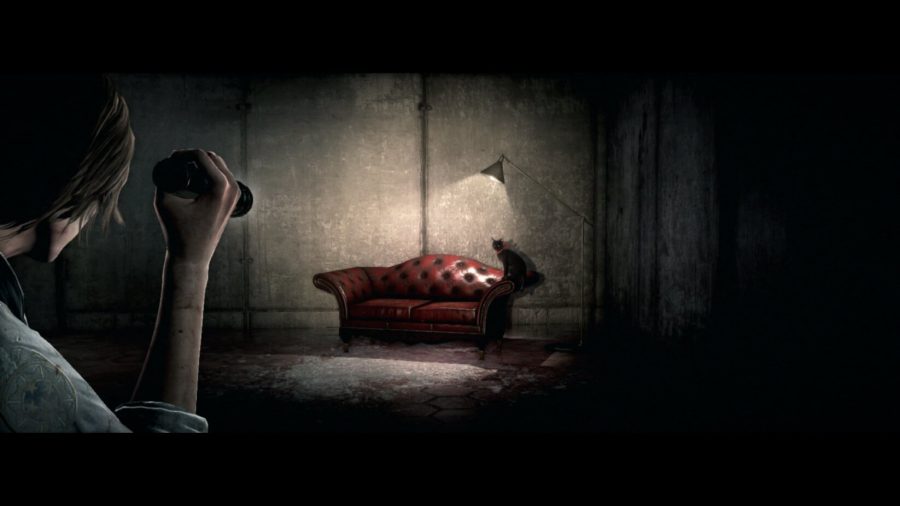 …stealth cat is back. This one was a real struggle to finish. Not because it’s bad, or overly hard, but because 4 more hours of stealth is too much. I had my fill in The Assignment and now it’s even worse. How do we make it even stealthier? They said. Let’s remove her flashlight as well. Everything will be darker! Genius!

This one feels really lacking in direction or ideas because they reuse a lot of stealth gameplay from The Assignment, but now it’s just darker and a bit more gruesome. This has a lot more exposition than the other DLC or anything in the game as well, it felt like they were just desperate to tell a huge amount of story and shoved it into this tight DLC where it didn’t fit. For half of this DLC you are just standing there watching visions or cutscenes. The story is kinda interesting, to its credit, but the delivery is not. 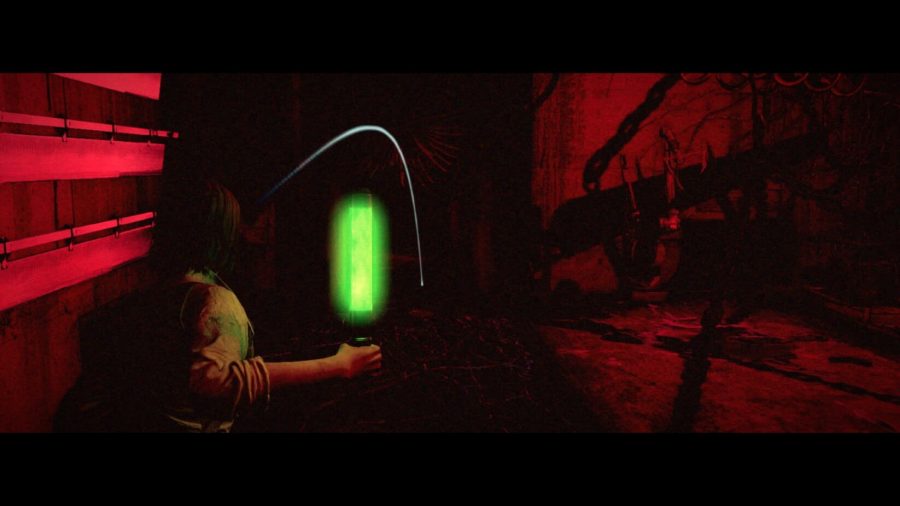 Here’s a nice gameplay addition. After you dramatically lose your torch, you get a supply of glowsticks to throw around dark rooms to light up spots of your choice. You have to be careful you don’t hit a zombie while throwing, so it helps to listen as well. Apart from that there’s actual a few action pieces in this DLC, but they are over quite quickly and nothing more than a shooting gallery really. There’s a couple of new stealth segments with regular enemies that I found pretty fun. It’s just very inconsistent because some parts are awful, including a certain boss segment. There’s a “harder” version of an enemy that does laps around a room and you have to run around wildly for a few minutes. It’s almost completely lacking in strategy and only difficult because your movement sucks. For some reason Kidman just doesn’t seem to react when her life is in danger. Oh something’s walking towards me about to murder me? Better stop and catch my breath. Now I’ll slowly jog away at walking speed, because despite doing this 20 times already I’m now too spooked to move!

The Evil Within without has a lot of unbelievable set-pieces but this is where my suspension of belief just stopped working. I can not take this seriously when she’s made to be incompetent for the sole purpose of gameplay design. This DLC successfully makes Kidman look weak, which makes no sense considering she grew up on the streets and is meant to be a badass hardened cop. I recommend this DLC only if you really like stealth.

If this DLC proved anything to me, it’s how much difference a good director makes to a game. These campaigns were handed to a slightly different team and it shows. Never at any point did I feel frustrated with the main campaign, but this DLC has a lot of issues with pacing and poor gameplay. It does add some pretty important story, which is explained in a more straight manner than the main game. In a strange way I found that diluted the game world overall, and I think my time would have been better spent just replaying the main game on another difficulty, or regular New Game+. Overall it’s hard to recommend any of this DLC, quite honestly. They each have unique things to offer but the experience isn’t that good. I’d say The Assignment is the best one to try for the new environments and a taste of stealth. The Executioner offers some cheap thrills as well. As an overall Season Pass package it’s a bit too inconsistent to recommend. I’d give the main game a 10 out of 10 and the Season Pass a 6 out of 10. Perhaps if I didn’t play it all at once I would have a brighter opinion of it, but this is the only opinion I can give.

One thought on “The Evil Within – Season Pass of Horrors”