The next big esport of our generation has emerged. There will be no fighting, shooting or platforming in this championship. Just pure brain power, concentration, focus… and maybe a few scratched screens.

Today was the day. I had prepared my whole life for this. Writing answers on the chalkboard in Maths class was just practice for the 25x calculations time trial. I knew something like this was coming, even before the technology existed. After dropping Maths in Year 10, I still continued to hone my skills in Brain Training on my DS, dominating the leaderboards in my household (good effort though, Mum). After such extensive experience, how could I not enter the Brain Training World Championships? This was my calling.

You get two attempts at each exercise, so I spaced mine out to maximise efficiency. My first attempt was in the middle of the night, the next one when I was fresh in the morning. You never know when your brain is really going to switch on, so why not take advantage of both environments. I knew my biggest weakness would be Finger Calculations so I did that first in regular training to refocus on it. This is the exercise that uses the Joycon IR camera to detect how many fingers you’re holding up. It’s decent, I just prefer to stick with the touchscreen to do all my training more efficiently. Now I was about to pay the price for my plain “inside the box” thinking. A real brain workout doesn’t play it safe. This was a wakeup call to expand the scope of my exercises and embrace it.

Too late now, Mr Grubdog. Skipping your homework has consequences… hey, stop spinning me around right now! Put the stylus down!

When you start a “World Championship” exercise the Switch connects online and cements the attempt. All the pressure was on seeing that “connecting” bar at the bottom of the screen. This was officially moderated by Dr. Kawashima himself. I put my best foot forward first and did the exercise I was most confident in, just to crush any nerves. I smashed out an 18 second time in Calculations x25, my second best ever score. It felt really good to perform on the big stage like that, with no mistakes. It’s very easy to write the 5 incorrectly or mix up a 4 and a 9. Surely there are some geniuses around the world playing this, but that had to be up there. Since you only get two chances, most people would probably crumble under the pressure. I was doing myself justice at least. Dual Task was a similar success, matching my best ever score. Finger Calculations and Photographic Memory were the other two, and they felt solid. I slept on it, feeling fairly confident about my efforts, and more importantly happy to have participated in such a historic event.

The next morning I had my second attempt at each exercises. I was feeling sharp, fresh, witty and full of championship aspirations. Yet… somehow my brain was not where it seemed. All my times were about 5 seconds slower than last night. So it looks like the first effort was going to be the one submitted. Oh well, at least they were good. I was still a bit shocked that I got worse results while feeling better. I guess you need a little bit of stress or hype to be at your best. Perhaps I’m just a night person. Perhaps… the sample size of 2 is too small to make definitive conclusions about anything. Nah.

I eagerly awaited the next day. The results came in…

Top 20%, huh? I got this for both Dual Task and Calculations x25. Not too bad. Not the maths genius I thought I was at 8 years of age, and not the world champion. I was too impressed at the presentation to care though. The results were very comprehensive with top 100 lists showing country flags, and different rankings for your age group. I was also top 20% for people my age, with no real difference in ranking. Japan dominated the overall charts with what I would estimate as 95% of entries into it. Because they are smarter? Well, they probably are. It’s also the biggest gaming market for this game. In fact, only Europe, Australia, New Zealand and Japan even entered this, with no American release date on the radar yet. This game is also doing much better in the Japan charts compared to other regions. So this was basically the Japan Nationals, with special guests. Maybe this is Japan’s way of getting back at Nintendo America for calling the E3 2015 event the “Nintendo World Championships” when it was only open to America. You can have your fancy Marios and Splatoons, we have true prestige and discipline.

Oh no, how did this pic get in here? 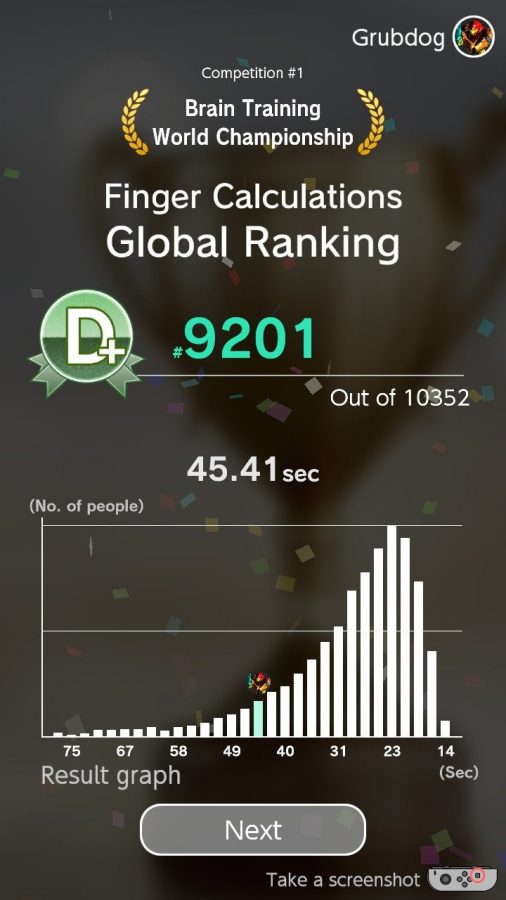 Whoops, this is embarrassing. How could I be in the bottom 10% for this exercise? I remember at least being happy with my effort. Unlike the other exercises… there appeared to be something fishy about the top scores. Sadly, it turns out you can cheat in Finger Calculations. It has a very lenient way of detecting your gestures, just to ensure the IR camera doesn’t mess anything up. If you just open and close your fingers wildly you will get every single answer right. It just flies through the list of questions, ding, ding, ding ding ding ding ding, before you can even read them. The camera reads your hands faster than the human eye can. That’s the scary thing about this tech, it probably is detecting the right answers. The IR camera never misses anything, and you technically can make every hand shape by flailing about. Hopefully this will be useful data to the developers to improve or balance this exercise. Or maybe they’ll think we’ve all got superhuman fingers?

I had a lot of fun participating in this event. It was very quick and simple in terms of player commitment, but presented with a lot of polish and statistics to back it up. It even had its own epic music and dialogue. If they keep doing this weekly, this may as well just replace daily training for me. It’s a much more hype way to do it, and a bigger motivator to improve. The next round is already scheduled for this weekend, and the exercises have been changed up. I’m feeling quite good about my chances in the Calculations x 100 exercise. Look out Japan! Brain Training is a marathon, not a sprint. No point topping the 25 standings if you can’t last for 100. Not pictured in the writeup is my average 50% score in Photographic Memory that I have since improved. I don’t even need to take screenshots from my Switch anymore, I just store images in my head now and project them into MS Paint. Now there’s a good incentive to train your brain.