Imagine a spiritual successor to Donkey Kong Country came out without anyone noticing? That’s what we have here. After years of hype for Playtonic’s debut 3D platforming game Yooka-Laylee, it received quite a bit of backlash for not being the best game ever made. It was pretty much what people asked for, a Banjo successor that revived open 3D platforming, but unreasonable expectations developed over the years. Playtonic took a completely different approach to Impossible Lair, announcing it and launching it very quickly in the same year. All they really needed to sell this game was a trailer with new David Wise music, roll-jumps and barrels.

Instead of purely catering to kickstarter backers demands, Impossible Lair is a passion project that takes advantage of the 2D platforming genre to fix all the problems the original game had. The “empty” and “unfocused” level design of a 3D wasteland becomes very focused and tight when you can only move left and right. I recently finished all 40 levels and the Impossible Lair itself, and I really have to commend this game. I’m a huge fan of Donkey Kong Country and especially Tropical Freeze, and I’m bursting to talk about this. Impossible Lair is the real deal.

The famous roll-jump from Donkey Kong Country is back, which gives you the freedom to roll off cliffs and jump out of your roll. This is one of the essential ingredients that makes DKC games so much fun, the flexibility to jump out of a roll at any height. The levels are designed appropriately to give you opportunities to roll under enemies, cover huge gaps and take risks. Besides the regular jump and roll-jump, you have a ground pound, a tail whip that extends your jump, and Yooka’s tongue to pick up objects. Laylee acts as your second hit-point when you get hit. If you lose Laylee you can’t ground pound or spin your tail in the air so it gets a little harder without your helpful friend.

This game adds an extra dimension to the regular 2D platformer structure, with an expansive overworld that plays out in isometric top-down 3D. It’s so big that it could be its own little game, I probably spent an hour or two here just exploring. The path to each level is opened by very clever and curious puzzles. Every level also has a second version, which is created or discovered in the overworld. Flipping a switch, turning the book upside down, filling it up with water, covering it in honey, freezing it, it will all change the contents of a level as well as the music. You can enter two levels from a single book, which can be changed from the outside. Nothing to be afraid of.

There’s 20 different “books”, all with a regular level and one different variation. Some games will have one singular gimmick for the entire game, like everything being upside-down for example. Impossible Lair puts a lot of effort into making each version different and authentic. This game is absolutely jam-packed with highly crafted design, from the level layouts, to the themes, all the way down to the music.

Ah yes, the music. I heard some of these songs before playing the game, just to tease myself. The music single-handedly sold me on buying this game, but I had no idea how much more depth there would be. The soundtrack is absolutely amazing and one of the very best in David Wise and Rare’s rich discography. I’m going to take this pretty far and say it’s better than Tropical Freeze’s soundtrack, bringing even more tones and variety into the mix than ever before. This soundtrack doesn’t go for quality or quantity, it goes for both. David Wise and Grant Kirkhope from Rare fame are back, along with new composers Matt Griffin and Dan Murdoch. The stunning thing about this lineup is that the new tracks hold up very well against the legends. Check out Urban Uprise Updraft by Matt Griffin and Power Plant – Powered by Dan Murdoch for examples of their new work. You know they are onto something when some of the Youtube comments say “another hit by David Wise” over the new artists songs. Oops.

No, I’m still not done talking about the music. There’s one level that stands as one of the best examples of music in platforming history. It’s a more “open” level than the rest, where you need to collect 5 different honeycomb keys to open a door. Every time you get one of the 5 honeycomb pieces, it adds an extra layer of instrumentation. Whether it’s an additional melody or instrument on top, it has a huge impact. The level suddenly feels different, more evolved. Suddenly the drums kick in. Suddenly there’s another guitar. It all combines to bring a lot of energy to the stage by the end. To top this off, this same stage has underwater sections that also change the tone of the current music. So there ends up being 10 different songs in one single level, in a game with 41 levels. You can tell they had a lot of fun making this soundtrack. It just sounds fun. The songs vary a lot and get better throughout the game I think, as the levels get more creative, the music always matches it.

Okay, I’ve conquered my fear of spikes and I’m ready to try the Impossible Lair again now. This is the first and last level of the game, and significantly larger than any other stage. You are free to try this at the very start, but it’s going to be rough. The more Beetalions you save from the regular levels, the more “lives” you get in this superlevel. It’s like fighting an overpowered enemy too early in Dark Souls, or going straight to Hyrule Castle in Breath of the Wild. It’s nice to have the option. The level is VERY difficult so if you don’t have the bee army on your side, you really need to master each part of it. This is also the only part of the game that has boss fights, so you have to get used to changing direction quickly and spotting patterns. I love the design of the main villain as well. Capital B is your classic corporate suit with way too much power, trying to enslave the world for his own amusement.

The difficulty in the Impossible Lair is way more extreme than any of the actual levels, which have their own challenges but with much more relaxed conditions and checkpoints. I always found it quite jarring going back to the Impossible Lair after a regular level. You get used to it though if you really focus on it. While I would give it one criticism for overusing spikes, overall I found it a great challenge and I had fun learning how to get through it. Just knowing beforehand that it’s meant to be “impossible” is a good motivator. Impossible just means it’s worth doing. The bees must be freed.

If there’s any major weakness of this game, it’s the core controls of Yooka-Laylee that let it down slightly. Not that it feels bad, it just lacks that last bit of control polish you would feel in a Nintendo game. This is a really hard thing to explain, but I gotta try because that’s a writer’s job. Yooka isn’t quite as “energetic” as Mario or Donkey Kong. There’s no good feedback for your movement and the regular jumps lack impact. Sometimes in Yooka-Laylee I would also clip through walls or fall through solid ground. This is probably just because it had a smaller budget than a Nintendo platformer, so personally it doesn’t bother me that much. I had to reset this level in the clip below, but you just gotta laugh at those moments.

Oops… guess I wasn't meant to get up here #YookaLaylee #NintendoSwitch pic.twitter.com/l7Gf6Q9cPv

It also suffers from very long load-times for individual levels, but that’s also a problem in Nintendo’s own Tropical Freeze and Yoshi’s Crafted World. Loading an entire 2D level with 3D backgrounds is essentially like loading a huge 3D area, without many tricks in-game to mask the loading. It’s just all there at once. When you actually look behind the scenes and “unfold” the 3D assets out of these 2D levels, they are huuuuuuuge. To put it into perspective, Retro Studios themselves confirmed in an interview with now defunct GamesTM magazine (probably defunct because fansites stole their content) that Tropical Freeze had bigger 3D areas than the Metroid Prime games. This is why loading is so long in Yooka-Laylee too, but it’s almost a necessary evil as the game’s creativity benefits a lot from hand-crafted 3D backgrounds. The levels have more to say. They feel much more wholesome than a flat, pixel-based Indie game for example.

Having animated 3D objects in the background just gives the levels more breathing room, I think it allows for more expression. There are pros and cons for each style, but they do use the 3D backgrounds to very good effect in Yooka-Laylee. It helps tell the “story” of a level which was a huge strength of Tropical Freeze I tried to explain when I reviewed that. An example of this is water pouring out of pipes in the background as the water level changes in gameplay. You also get to see things blowing in the wind when a storm is coming. Every level tells a story. 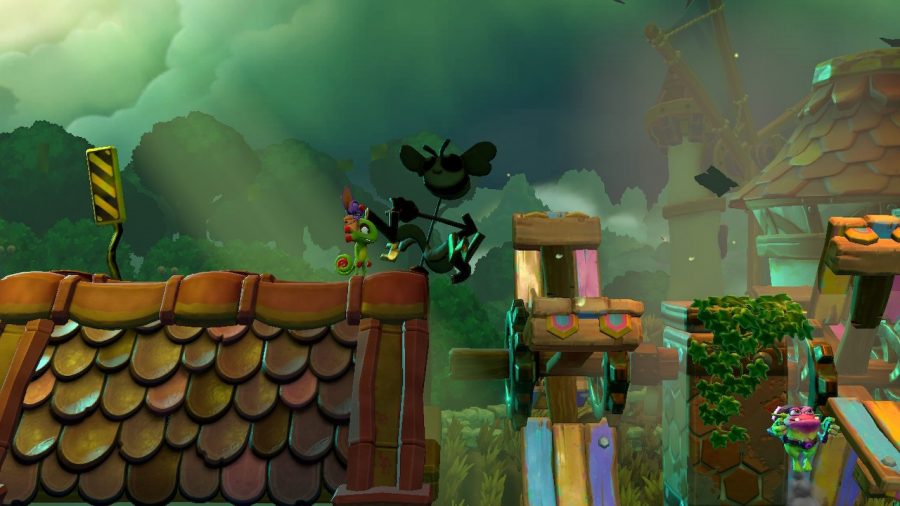 Yooka-Laylee & the Impossible Lair is a fantastic platformer that ranks highly with the very best in its genre. After the shock of the Impossible Lair, it starts of with some fairly average, inoffensive and easy level design, but gets more insane and creative the further you get. Even the overworld movement is enjoyable with lots of funny characters to meet. I highly recommend this game if you enjoy any kind of chill platforming whether it’s 3D or 2D. It’s just a very refreshing experience with a lot of charm and new ideas of its own. It’s rare to find a 2D platformer this good outside of Nintendo’s own efforts. If nothing else, check out the 2019 soundtrack of the year and get your groove on. The impossible is now possible.