The year is 1343 AD, in a small village in medieval-era France. You’re having a nice day when a messenger runs into town screaming. There’s been an outbreak!

The Black Death! It’s coming! The plague is coming!

What do you do? Do you believe it? Do you assume the worst, or shrug it off? This could be a lie to force people out of town. It could be true. It could have taken weeks for this news to get here. Some people hid in their homes. Some people traveled to find more information. Some took to alchemy. Some descended into madness and violence. A Plague Tale: Innocence tells this story from the very vulnerable perspective of young children. They are separated from their parents, and forced to face a mass outbreak of disease on their own, dealing with all the best and worst aspects of human behavior on the way.

This game has a very impressive game engine with stunning graphics, I couldn’t believe it when I first played it. I haven’t seen something this realistic since Red Dead Redemption 2, but this is a completely different setting with more focus on the smaller things. Everything is highly detailed, the camera control is smooth, and your character control is responsive. So what do you actually do?

The gameplay is largely focused on storytelling, with the core gameplay element being stealth. The usual hiding and sneaking applies, while watching guard movement patterns. Why are you running from guards? Because they want your little brother dead. He has a different illness since birth and with no knowledge of disease, they suspect he is the devil or worse. There wasn’t much science to go on back then. You can walk with your brother, or issue commands to make him wait while you distract guards or get items.

Of course, the disease itself is another threat and comes at you in the form of rats. Thousands of rats. These are the “black death”, infected feral rats that swarm you and devour your corpse in seconds. They all have glowing eyes, dart around furiously and combine to make a terrifying high pitched echo of screeches that I can still hear in my head.

Stay back! Luckily rats have a weakness, fire! They won’t go near it for some reason. This creates gameplay opportunities and puzzles that revolve around setting fires and moving objects around to safely navigate the rodents. The further you get into the game, the more tools you get to deal with them. Your main weapon is a slingshot with rocks, and you can eventually substitute the rocks for all kinds of powders and alchemy in the weapon wheel to start fires or put them out. There’s some creative solutions but overall it feels like the gameplay is quite scripted. When sneaking around guards you can do what you want, and some of the areas are quite open. Usually when you try to break the mold though, you just die. I suppose that’s realistic in a way, but it can get boring when the gameplay is pretty much the same stealth concept for 20 hours. It also has a crafting element, which serves no purpose other than to scatter mundane materials around the world to give you something extra to collect.

With somewhat average but functional gameplay, the story and scenario are the main strengths of this game. It’s just fascinating to imagine what things were like at this time, without all the modern technology we have for getting information. When I saw people rioting over toilet paper in supermarkets in recent days, it reminded me of some of the primal behavior in this game. I’m not sure if technology and information has helped us as much as we think it has. In A Plague Tale you see a lot of horrible human beings just looking for an excuse to murder others. Oh you? Yeah, you look slightly sick, I think I heard a cough. You’re dead. It’s nice to know we’ve evolved away from that at least.

To contrast that, there’s some very nice people in the game too. People of all different opinions. Some guards who don’t really want to be there. Some doing what they’re told out of fear. Some fighting against it. Some want to help you. There’s a strong feeling of uncertainty when you see a new person. Will they help us? Will they kill us? After seeing so much bad soldier behavior you develop a feeling of distrust, which just makes the good people extra surprising and refreshing.

I have to warn you, if you’re not comfortable with grotesque scenes, this game isn’t for you. It’s full of morbid stuff like piles of dead bodies, people being hung, executed, and eaten alive by rats. Even the core gameplay allows you to manipulate the environment so rats devour the soldiers alive. It’s a very harsh reality, made even worse by the fact that you are a child stepping over dead bodies. Despite all this heavy content, I don’t think the game lacks any taste or form. It just shows everything bare. 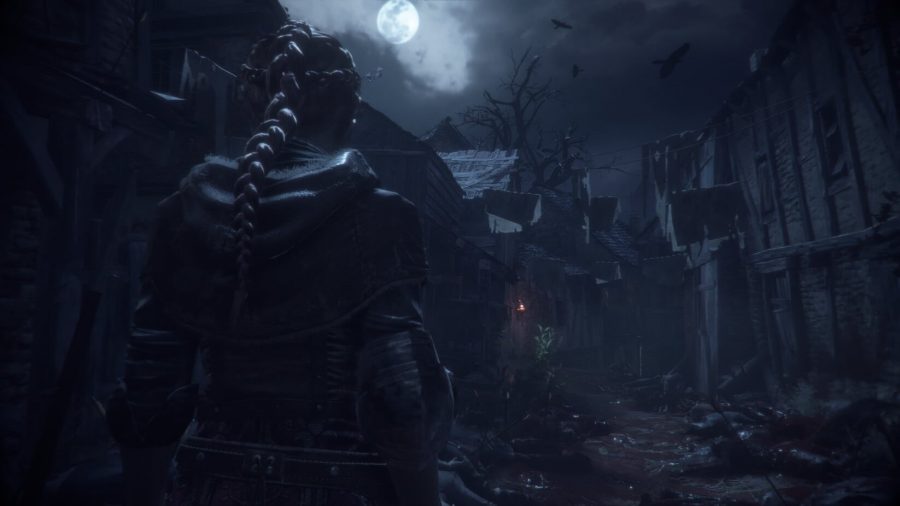 Overall I found A Plague Tale: Innocence to be a very unique experience and I’m very glad I played it. The gameplay isn’t perfect, but it does the job just well enough that I was playing all the way to the end. I had to take a little break before coming back to finish it, but it was worth it. It’s nice to have such a unique scenario not normally seen in videogames, with such a large scope and graphics that rival big budget games. We’ve seen hundreds of games about wars, but not much is said about The Black Death that killed 50 million people. It’s not quite as marketable as a gunfight, but it does take you back to nature with an experience you won’t forget. I’ll never look at rats in the same way again.