Your health is getting low, and you’re lost in the depths of Norfair. The only light in this dark hellscape is burning hot lava. You can feel the heat threatening to chip away at your HP. Alien creatures sense your fear and hop towards you aggressively. You fight and push on as far as you can go. You’re not quite sure what’s up ahead, but the hope of an Energy Tank or any kind of upgrade is keeping you going. You could go back and farm for health, or you could risk the unknown for a big pay off. What’s there to lose? You can always respawn and try again with full health…. oh wait, no you can’t. Help is not coming.

Dying in Metroid punishes you by reviving you with 30HP, regardless of how many additional e-tanks you had. This means enemies can kill you in a few hits, and farming health back will take more than a dozen enemy kills to get. The odds are never in your favour, as you lose health much faster than you can get it back. This might seem unfair but it was essential in creating this feeling of danger while moving forward to the next room. How much are you willing to risk?

Metroid on the NES started a new genre of 2D exploration back in August 1986, now known as “Metroidvania”. Not only that, it was the first game on the NES where the screen could scroll up and down, and allowed you to move back to the left. Not even Mario could do that. I never played it at the time, but I imagine the first impression from a lot of people would be “whoa, you can go back??!”. You had to do it to believe it. It sounds primitive but that level of advancement is not seen too often throughout history. It’s up there with 3D graphics, handhelds, online gaming, and Ring Fit Adventure.

Despite being innovative at the time, the original Metroid is known these days for being brutal, unfair, unpolished and flawed. All those things sounded great to me, so I went back to the game recently to speedrun it as part of my Metroid obsession. I found that while this game is definitely flawed, even today it impresses in some unique ways. 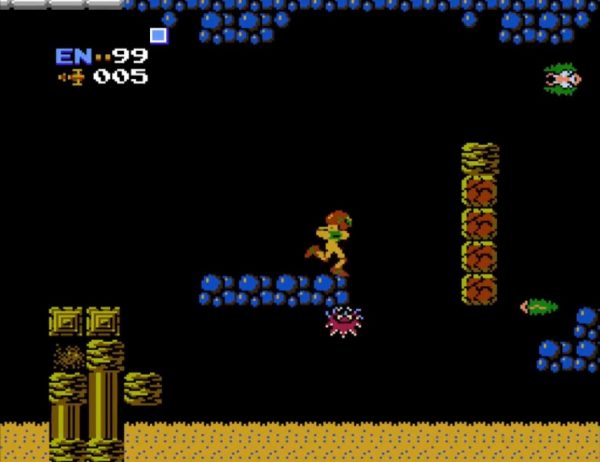 The difficulty takes some adjustment. You can lose 20 HP from an enemy, then you’ll have to slowly farm health back by getting 5 energy at a time. Furthermore, the enemies might not even drop health, ever. There is a legitimate mathematical chance that you can get 0 drops of health or missiles in any given room here. Today this would be known as “bullshit”, but back then it was known as “difficulty”. The game never actually becomes unbeatable as you can always refresh the room and travel back to the start, but it certainly messes with you. There’s also no way to know if you will get health or missile drops, as the game assigns a hidden value the moment you enter a room.

Compared to other NES games the movement of Metroid was very special. There weren’t many games where you could take on two forms, let alone obtain abilities at all. Not only can we roll into a ball, but we have multiple beams, screw attack, high jump and bombs. You can even freeze enemies and use them as platforms. The “creative” platforming and movement of Metroid games is something that not many other games have been able to copy successfully to this day.

All these upgrades slowly make Samus stronger throughout the game, which became a staple in the Metroid series and one of the defining features of a Metroidvania. However, this feeling of “HP progression” also created a certain type of challenge that has evolved into modern games like Dark Souls. You quite often have to take risks because of your HP. You might not get it back if you die, there might not be anywhere to farm. This is not too different than losing all your souls. Both are a big time investment, and you slowly trundle back to where you were with slightly more precision, awareness, and regret.

The first minute of the game is a great lesson in game design. The very first power-up forces you to go to the left, no doubt to show off the fact that you can go left. At the time, people might not have even tried to go left since in other games it was out of the question. After walking around a bit… you’ll eventually realise you can’t progress on the right so you come back, and then Booyah! It’s the morph ball. After you get it, the cliff is designed so the only way out is to use this new power up to roll under the tunnel. To this day, every new 2D Metroid has you moving left at the start to keep the tradition going.

The lack of health, dark background and punishing enemies make the map feel even bigger than it is. What I found unique about this game, compared to other Metroids is that there are some areas on the map that have nothing useful at all. In Lower Norfair there’s a loop that has no items, its only purpose is to get you lost in the depths of hell and question your existence. A haunting soundtrack compliments this giant maze to make it feel like a tangible place. Despite having the most basic graphics, the game feels enormous because of the effort required to traverse the map.

While I had some frustrating moments revisiting this game and learning to speedrun it, overall I was left with a humbling feeling that I’d experienced something special. The core platforming and shooting in Metroid is very satisfying and highly playable to this day. The fact that you can roll off an edge, unmorph and then jump in midair is a cooler movement technique that many other games I’ve played, and not even possible in other Metroids (even though you can do far more). It also has a very calculated style of platforming where you really have to take enemies seriously, and wait for a lot of good patterns and drops. It all combines for a satisfying feeling of progression that has to be earned with bravery.

It’s hard to imagine a gaming world where Metroid wasn’t released. Would there be a whole genre inspired by Kid Icarus instead? That was the next game to have this advanced type of “open world” movement that remembered locations back and forth. Perhaps hundreds of games afterwards would have gone in a completely different direction. We’ll never know, but I am extremely grateful to Metroid as it brought us so many good things. You can feel its origins all the way up to Splatoon, as the idea of morphing into a squid came from Samus going into morph ball. Not just that but it was one of the first games to have a female protagonist and multiple endings depending on your playtime.

You can view my current best playthrough here, clearing the game in 25 minutes. If you haven’t played it though I recommend going in completely blind and suffering for yourself. Like all good things, it’s worth the struggle.

One thought on “Metroid 1 – Where the Universe Began”