Riiiiiiiidge Racer! Despite its loud intrusive in-game commentary, it’s one of the quiet titles of the 3DS launch. Partly because Ridge Racer has been everywhere, but never really been special. The DS launch, the PSP launch, it’s like the creepy guy who hangs around the girls and never says anything. He might have a lot to offer, but it’s not worth wading through sweaty body odor to find out.

The fact that it has no glitches, smooth 3D, and isn’t a Nintendo game doesn’t lend it to the spotlight very well. It’s a low talking point. You can’t troll the system with this game, you can’t blame Nintendo for anything, and you can’t berate any lack of effort on third party developers. Something you’ll never hear: “What, you got a 3DS? Is that the system with Ridge Racer 3D?”. It’s also hard to present it as something new. Ridge Racer 3D is a solid racer that does a lot of things right, provides a lot of content, and is damn fun to play.

Firstly, the controls are smooth. The analog nub works so well, it allows for effortless movement from left to right, and smooth adjustments. The handling of the cars is very responsive and you can adjust drifts pretty easily. Good control is important in this game because drifting plays a big part, and a lot of the tracks are very narrow. Drifting isn’t an option in this game, it’s mandatory, it’s the only way to turn sharply enough through corners without awkwardly scraping the wall. Drifting also fills up your boost meter.

As you progress through the game and the cars get faster, the control required to not hit the wall is pretty high, but it’s all in your hands. Unlike some racing games the wall actually slows you down – a lot. You can see this as a bad thing, or you can enjoy the thrill of drifting sideways in first person, watching the wall fly by inches away from the front of your car. It’s terrifying and exciting.

One thing that isn’t in your hands sometimes is the AI, they are aggressive and cheap, and this is where pretty much all the challenge of the games events comes from. The way races are set up indicates this is done on purpose, and puts the emphasis on overtaking. You start off 8th in every race, while 1st place has already started the race about 15 seconds up the road, and everyone follows in between.

Firstly, don’t even bother boosting in a straight line. The AI around you will all boost at the same time, and their boost will usually be faster. The best way to get through the field is to utilise the game’s exaggerated slipstream effect. This also means when you pass a car, you better plant your butt right in their face otherwise they’ll go right back past you; there’s nothing more depressing than being passed by 8th place. Boosting should be done on corners but you better make sure you’ve got a clean line around your opponent, or else they’ll plant their car right in front of you, and they’ll somehow go from 300 kph to 400 mid-corner while sideways just because you boosted into them. Boosts can make you dramatically faster, and cut your lap times significantly, but it just makes the AI use them as well, and all you need to do in the game’s events is win the race, so using them at the right time is what matters.

That’s all well and good, it’s a racing game, you drive fast and test your skills, but that’s just half the experience. The 3D effect is absolutely mindblowing in this game: the game’s natural sense of speed combined with some nice environments is something to witness in 3D. These are the best graphics I’ve ever seen, it feels like a new generation. Watching the trees fly by the sides of the track, feeling the tightness inside a tunnel, and looking around the background in awe as you go over a jump are significant parts of the play experience. The game itself lends itself to 3D very well, being sideways half the time means you get some great views of the track and the environment around it. The 3D effect has me noticing things I don’t normally look at in racing games. Even watching replays is fun. You can change angles on the fly and it lets you save them and view them later over music of your choice from the game. Ridge Racer 3D works in 2D as well, the graphics aren’t groundbreaking or anything, but it’s still a nice looking game on the portable screen. The framerate isn’t perfect either, in most tracks it’s solid, but some areas have slowdown, and there’s one area that bogs things down dramatically and almost explodes the 3DS. Thankfully it’s a straight so it wont screw up your race.

Like most racers you start off with the slower cars and work your way up. The “beginner” tournament has about 18 different cups, consisting of 4 races each. Then there’s two more tournaments at higher difficulties. There’s a LOT to do in this game. Overall there’s about 16 tracks, with a reversed version of each one, and they’re all repeated through the games events. There’s 4 different categories of cars with about 15-18 different cars in each one; the cars all have different top speeds, but the biggest difference is in drift types. For example, a car with dynamic drifting might not be the best choice for a straight simple track with easy corners. You can also customise the controls to your liking, for some reason the default controls have “A” as reverse so this might be a good idea when first getting the game (I had quite a few awkward starts before I got used to that). Aside from the standard events and single race options there’s a Time Trial mode and a StreetPass mode. I’ve managed to StreetPass 4 people who had Ridge Racer 3D, however all I got were the standard StreetPass duels the game comes with. I’m not sure how it works but I’m guessing they hadn’t even set times for me to beat. Come on gamers, get serious! 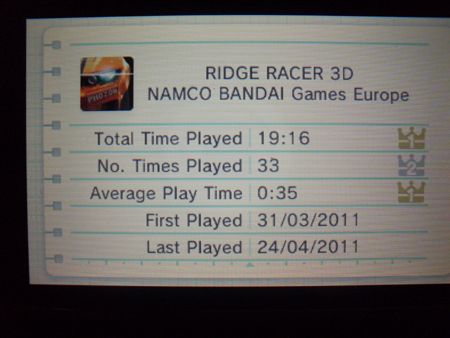 Ridge Racer 3D might seem like little more than a solid arcade racer, but it’s a whole new world, and a great launch game that justifies the existence of 3DS and 3D in games. You’ve got FULL NITRO, aren’t you going to use it?