2009’s sledgehammer-swinging simulator Red Faction: Guerrilla ended up being one of those games for me. As in a ‘whoa, this is what I dreamed the future of video games would be like as a kid’ type revelation. Emerged from deep within the dustiest corners of my mind; created over countless weekends of rental regrets. While I may have technically been playing the likes of Virtual Bart or Brutal: Paws of Fury, I was actually elsewhere – looking forward to a distant time where a game would reward me for driving a truck into the side of a building to somehow complete a rescue mission which should have required a certain degree of care and planning.

I’m currently replaying Red Faction: Guerrilla three years after release, and it still sits upon the high-chair of what this generation’s leap in virtual silicon gigaflop processing power actually added to the open world genre. This is a game about breaking shit in the most unrealistically true-to-life way ever seen. You’re given machine guns, but you don’t need them. You’re given an experimental electricity-spewing death ray, but it’s worthless. Everything in this game can be solved with some good old fashioned demolition.

Entire enemy bases will be completely wiped out – buildings collapsing to the ground in a chaotic avalanche of rubble – in no time at all. And they’ll stay like that for the rest of the game. “Retrieve these stolen documents” they say. So I go borrow a space taxi, park it inside someone’s house through its new custom-made door, throw some remote mines around the place like confetti and put my forearms to good use by knocking out support beams and explaining how I feel about their interior dectorating through interpretive dance.

Eventually the place falls down on my face, I shrug it off, and there’s a pretty good chance I’ve gotten back those documents. Done. Let’s celebrate by destroying the local diner. 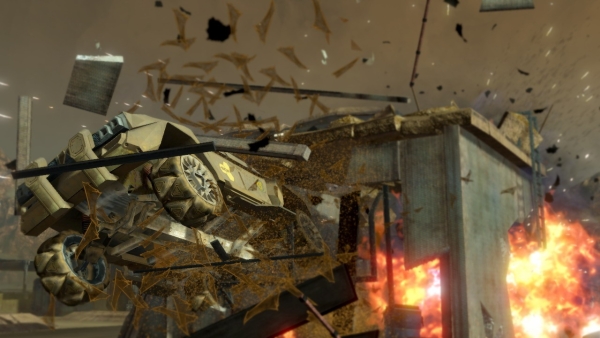 Volition’s GeoMod 2.0 engine is a thing of beauty. Well, I mean, as far as the whole Mars setting goes. Visually the game is just sixty thousand shades of brown, grey and red; like the horrible aftermath of a midnight kebab. It’s a war-crime that this engine wasn’t licensed out to other developers, and that the only other game to use it this generation was last year’s suicidal follow-up, Red Faction: Armageddon. They threw everything out the window in favour of a third person corridor shooter. I haven’t played it myself, but it was apparently bad enough to destroy the entire franchise, wipe out a huge chunk of Volition, and sent THQ spiralling even further out of control.

Wait. So… so  GeoMod 2.0 essentially crossed over in the real world, then? This is huge. I never would have expected this while getting confusingly aroused by the bicycle short-wearing fox in Brutal: Paws of Fury. 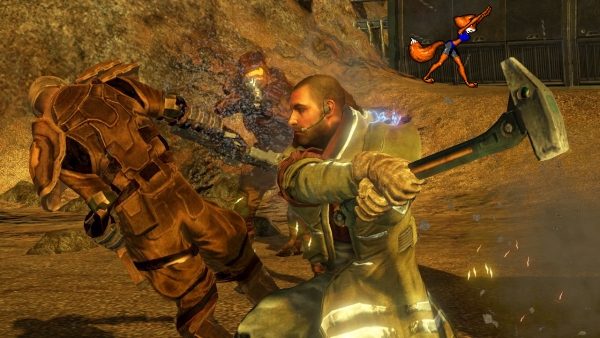 In closing, if the world were a decent place, we’d have a sequel to Blast Corps using this technology by now. But it’s not, so it would likely be Kinect-exclusive. You are the dump truck™.