A few years ago, Joy Ride Kinect was released as an example of how a racing game could benefit from Kinect controls. The game was a broken mess, to the point where you could win races without even moving. The developers have finally admitted this was a bad idea, and they’ve re-released the game with new “precision controls” (exact words used in the PR) using the normal Xbox 360 control pad. Joy Ride is finally playable in the form of Joy Ride Turbo, but what’s it like? Was there a nice personality hidden behind that awful piece of technology? 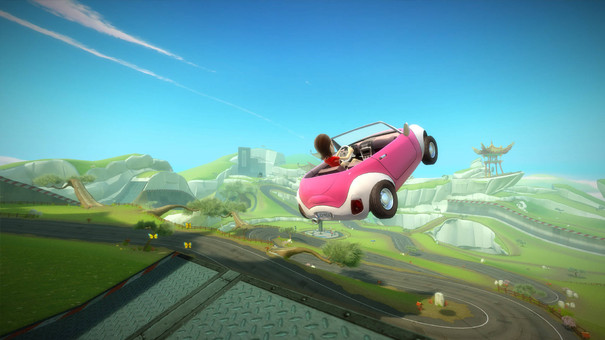 Turns out it plays very well. Your car will move left if you move the analog stick left, and also go right when you move it right. The R and L triggers also function properly as accelerator and brake. What a concept! If Kinect is the future of gaming, we’ve gone several more decades into the future with this functional control setup on the Xbox 360 pad. Only Kinect could make these basic controls feel so new and refreshing. Here’s the real surprise though: the handling is smooth, fast, and responsive!

The game disguises itself as a kart racer, but it’s quite a lot faster and the handling takes a bit of getting used to. It’s very easy to slide wide through a corner and lose all your speed, and you can’t just slither through the tracks by drifting. The handling is very touchy and responsive and you need to brake a lot; it’s not realistic by any stretch, but the approach is different to the exaggerated kart racing design you’d expect. Apart from the handling it’s got the usual kart racing items, boosts, jumps, tricks and gimmicks, and some pretty crazy track design. The courses are overwhelming at first, there’s tons of shortcuts going off in all different directions, and it gets more confusing when you find out the majority of “shortcuts” are actually slower than the normal race track.

The game really rubbed me the wrong way in the beginning, because you only start with 3 cars; one for each class. 12 other cars have to be unlocked by getting all three parts for each one, scattered around various tracks. It took me about an hour just to unlock a single vehicle. The courses are full of hidden areas where you can collect “parts” to unlock more cars, and this is why the shortcuts are designed the way they are. The tracks are essentially full of “secret areas” that become useless once you collect the items there. You also have to use 1500 credits just to change the colour of the paint on the existing car. It’s all a bit ridiculous for a simple racing game. Imagine if you only started with Mario in Mario Kart; there would be riots. It’s easier to get away with in Joy Ride Turbo because “ugly sports car” isn’t going to be missed by campaigning fans.


This is the most fun I had – Time Trial mode! I had so much fun I managed to top the worldwide leaderboard with this lap. Notice I didn’t drift or press the handbrake once, despite the game endlessly encouraging you to do so. You can build up boost by drifting or doing tricks, but you lose more time than you gain. I’m not sure what they were thinking. Perhaps with a different handling car, drifting becomes more useful, but I’m happy with this setup and evidently it works. The feel of drifting isn’t very satisfying either; it pretty much halves your speed and only really works on corners that spiral around in a circle. The handling is very touchy and it’s more important to keep your speed than hit the conventional racing line.

The power-ups aren’t even worth talking about: there’s a homing missile, shell that just sits there on the track, fake box, and a boost item. There’s 12 items altogether – the rest are so dull I can’t even remember them. It’s simple Mario Kart 101, except Mario Kart always introduces a new item idea; this doesn’t even try. There’s an option to race without items, and the game has the nerve to call it “Pro Race”.

Stunt Mode is a brand new addition to Joy Ride Turbo. This mode basically drops you in a big park and let’s you drive around at your leisure collecting 40 trophies. Trophies are scattered randomly in the air and most of them are obtained by awkwardly glitching off ramps and bouncing off invisible rocks. It’s a complete mess, a lot of them are randomly placed in mid-air, and you have to drive around the entire park to find a ramp that ends up dropping you in that particular spot. Not only that, but you have to be inch-perfect. I was having fun until I got up to the last 10 or so and realised I needed an item to be able to jump high enough to get them. So I drive over the item box… and get a shitty missile, despite being the only person in the stunt park. By the time I’ve fired it towards nothing like an idiot, the item box has regenerated. Oops, just an explosive this time. So I get rid of it, driving away from the box because otherwise I’ll blow myself up. Finally, the boost item! Now DON’T STUFF UP THE JUMP! Considering there’s a one in twelve chance of getting this boost item, this is unbelievably bad design, and I had to stop playing this mode because it was so boring. Kinect controls would make these jumps impossible; I can see why they held this mode back until this version.

Joy Ride Turbo ticks enough boxes and does a good job proving its worth. There’s an online multiplayer mode and 4 player split screen which I haven’t tried, but I’m grateful for. It’s a great game to have installed on the Xbox 360, and it’s absolutely worth 800 Xbox Points. Even with a bit of a learning curve, it’s mindless fun and there’s a lot to do after the races get boring. The great sense of speed when you master the courses makes it all worth it.