Wii U may have been the big attraction, but 3DS was the real hero who kept us busy in the long lines. A dedicated gaming event like the EB Expo is perfect for StreetPass action, and I got tons. Popular games included “Health & Safety Information” and “System Settings” , which is “OK.. I guess”. Some guy went out of his way to show everyone he owned Etrian Odyssey III. Hardcore, dude. I rated you Fantastic! for your efforts.

Paper Mario: Sticker Star is eye popping – it looks AMAZING. I’ve seen the trailers, but playing it on the XL took it to the next level. The 3D effect is perfect on the 3DS XL units, the best I’ve seen. The colours are refreshing and vibrant, and the controls are great. I didn’t play long because I don’t want to spoil too much about the story. It was an interesting town, I snuck between two houses and found a secret back alley, peeling a sticker off the wall. I revealed a Toad who was hiding behind a bush; he seemed terrified of something. I whacked him with the hammer and moved on to the next game!

Professor Layton and the Miracle Mask greeted me with charming characters and a strange town. I’ve never played a Professor Layton game, so this was a revelation. What a nice atmosphere this game has; I couldn’t hear a thing on the weak 3DS XL speakers, but as I scanned a magnifying glass around town there were a lot of things to be curious about. An exaggerated Tingle look-a-like had tangled himself in balloons, and I initiated a puzzle to unravel them and free him. It was fairly basic but it gave me a good idea of the puzzle nature of this game, using the touch screen to slide panels. The 3D during cutscenes was nice, but had a few instances of popup and wasn’t nearly as flawless as Paper Mario. Being completely ignorant to this series, I can’t tell you how this is different to the DS ones. I’m keen to go back and play those now because this left a very good impression.

Spirit Hunters Inc. is a DSiWare game that uses the camera to look around the environment in real-time and find spirits. The colours around you determine what element the spirits will be, and sure enough when I played at night I found a shadow spirit! It appears as a cloud of dust, and tapping on it initiates the battle! LET’S DO THIS!

The first battle in the demo gave me one ability to get familiar with; I aligned myself with the Ice element and my first attack was a basic stab. The game does not play itself: once you select the ability you now have to execute it on the touchscreen. I selected the ability and drew a line into the spirit to stab it with ice. After this you have to wait for the ability bar to regenerate, Xenoblade style. After a few more hits it was down, and then the game opened up a lot more.

The demo gave us a million points to spend on whatever we wanted, so before scanning for another spirit, I filled up the ability bar with as many moves as I could. OK, time to scan for another spirit… there’s one! Initiate next battle! The first thing I used was an avalanche attack that fell down from the screen. It devastated a good chunk of health from the spirit, but I couldn’t use it again for a while. My eyes scanned the abilities and I had a lot of different options; the next thing I did was envelope it with some kind of ice wall. Now it couldn’t move and I unleashed every attack I could on it! BAM, dead! 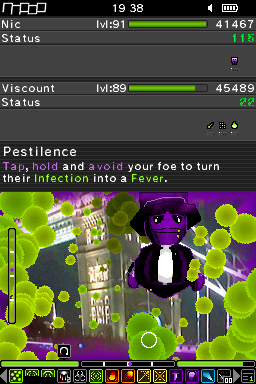 The second time I played I picked the light element, and noticed a few different types of attacks like a laser beam to steadily hold on the enemy. There’s also passive abilities, buffs and debuffs and moves that can drain enemies health. It’s a really advanced battle system for such a simple concept, and developers Nnooo have been working on this game for 2.5 years, hence why it’s still a DSiWare title. Nevertheless, it plays exactly the same on 3DS and it’s only 800 points ($8 US / $12 AU). I’ll be grabbing the game when it finally comes out in November and I’ll do a proper review. If this game gets enough support we could see more Spirit Hunters on the Wii U; Nnooo have Wii U development kits already and they’re excited! I’m excited too – I spent more time playing this demo than any other handheld game at the Expo. Here’s a new trailer that shows some high level battles and awesome music.

Shortly after visiting the Nnooo booth I played another AR game, Pokemon Dream Radar. It was extremely basic compared to Spirit Hunters, and will probably be more expensive. The game was so early that the Pokemon didn’t actually appear; they were just blobs at this stage of development and the game had a message to inform us how early it was. I shot down two of them and the level was over – didn’t see any abilities or much else. It was an amusing waste of time, but Pokedex 3D did surprise me. It has a cool trivia mode with some interesting categories. Which Pokemon has the highest speed? Which Pokemon makes this sound? Who’s Pokedex entry is this? Pretty hardcore trivia, and I think it’ll be a really useful tool to keep your Pokemon knowledge sharp before a battle.

Let’s take a break from playing games for a minute, and check our StreetPasses! I had it activated for the following titles, and they filled up pretty quickly! Here’s the count.

I’m surprised how popular Kid Icarus was; I never hear anyone talk about the game anymore. I could’ve got more on these games if I cleared them out and went back in, but there’s no way I was going to carry all that crap around. Only one guy in Ridge Racer 3D had actually set a time for me to beat, and I destroyed it by 5 seconds. Samurai Warriors was a similar pathetic turnout: I’ve won 12 of the 15 StreetPass battles so far; nobody put much thought into their strategy. Final Fantasy Theatrhythm shares profile cards; most people have put a good chunk of hours into the game, with one standout hardcore gamer at 70 hours. Heroes of Ruin gave me some items to buy in the StreetPass shop, which had been empty the whole game! Too bad the game is so short I’ve already finished every quest. Resident Evil was odd – I got one handgun bullet from each person. I’ll make them all count, guys!

Vita was there too, but the only ones I saw were the demo units. In fact the Vita area was bigger than the 3DS one, with the playable 3DS games relegated to a tiny raised platform for handheld snobs to look down on everyone.

Spy Hunter Vita took about 50 seconds to load, but it was decent. I shot a bunch of things and saw some explosions. Jet Set Radio Vita ran great; the graphics were fantastic and the controls were solid. I didn’t really know what I was doing, so after grinding on a few things I moved on. Uncharted! Shot a few guys – it’s Uncharted alright. The aiming actually felt better than the PS3 games. LittleBigPlanet was alright; the character felt really tiny and everything was zoomed out too far. Most Vita games (and the Wii U tablet) gave me the feeling that there was just too much shit on a small screen. I jumped around a bit and moved on.

Silent Hill Vita was a shock, mainly because it wasn’t Silent Hill Vita. It’s a fixed camera loot game. It played OK; I ran through a few rooms and examined a few things, then killed some enemies that rose from the ground. It was hard to get into it with kids screaming around me. Next game, Super Monkey Ball Vita! This was… embarrassing. It had 3 levels, about 10 seconds long. All from the 3DS version. Thanks for playing!

escapeVektor was playable on both Vita and 3DS. I only played the 3DS version because I’m a fanboy, and because 3DS is a system people actually own. I’m a huge fan of the WiiWare game so this was pretty exciting. The first few levels were from the original, and I hadn’t played the game in a long time so it was a good refresher course. After that I picked some levels much further in the game to try some new abilities. There’s now a Super Boost on top of the Boost, and a Boostinator which can not only vault you forward, but destroy every enemy in your path. It felt amazing smashing through enemies and I can’t wait to see what kind of ridiculous level design this leads to in the final game; it’s going to have tons of content. The 3D looks great too – it suits the game perfectly. Here’s a picture of the Vita version which I’m sure is also great.

That’s it! Now I’m back in my NSW country town which hasn’t provided one StreetPass in 5 months. It always felt great pulling the 3DS out of my pocket and seeing the magical green light; it’s a good reason to attend more events like these. You couldn’t look anywhere without seeing someone holding a 3DS. My first thought getting back here is how awesome it will be to play Spirit Hunters Inc. by the lake while fishing.