Ever get that feeling like your jumps aren’t getting that extra oomph? Inputs feel unreliable? Your button is a bit too unresponsive and starts sticking to the controller? Can’t get it up anymore? It can happen to anyone. In this tutorial I’m going to show you a trick the top speedrunners don’t want you to know. Allow me to present ….. opening up and cleaning your controller.

END_OF_DOCUMENT_TOKEN_TO_BE_REPLACED

It could happen to anyone. CharizardKing69 was so furious about Nintendo’s treatment of the Smash community he opened his wallet in support of a new, grassroots protest event. This event was organised by fans after Nintendo cancelled the livestream of their own official Splatoon 2 tournament. Teams had changed their names to advertise something illegal, which prompted the business to act like a business and protect its own interests.

“I really wanted to stick it to Nintendo by giving money to people playing their game“, CharizardKing69 said defiantly. The prize pool was growing fast, and ended up passing $25,000 to be distributed among the top 4 teams. This was the exact moment CharizardKing69 donated, and the prize pool was capped. It was then announced all other proceeds after that would go to charity. “NOOOO!! THIS MONEY WAS MEANT TO GO TO OPPRESSED GAMERS!”. END_OF_DOCUMENT_TOKEN_TO_BE_REPLACED

Welcome to the 64th Annual Running of the Dragon Trail Grand Prix! The cars are making their way to the grid now for what is set to be another thrilling race at the island. We are honoured to have so many guests here both local and from overseas.

Dragon Trail is an island off Croatia with a rich mysterious history. The name originates from sightings of a dragon said to be the guardian of the precious land here, who used to fly around the island in a particular pattern. There is no confirmed documentation of the dragon itself and many speculate it was just a bird with a big shadow, but word spread fast and the legend was born. No matter where it came from, every individual dragon report claimed that it made the exact same path around the island. Thus, the Dragon Trail was born. It was originally a walking track made to honour the guardian, but it eventually became it’s own racetrack to pay tribute to the dragon’s alleged speed.

END_OF_DOCUMENT_TOKEN_TO_BE_REPLACED

I’ve just woken up from some of the most amazing hours of my life. I’ve got my Switch, set it up, played some games and I thought I’d write some impressions while they’re hot and I’m sleep deprived. Firstly, I’m extremely grateful that Australia was part of the worldwide launch, as it basically meant we got the console first after New Zealand. Pretty exciting.

END_OF_DOCUMENT_TOKEN_TO_BE_REPLACED

We are nearing the end of an era as the Switch draws near with Splatoon 2 in hand. All the squids are growing up. Yet still here I am, playing Splatoon on Wii U and enjoying it like it’s the first day of release. This game changed my life in such a positive way. I absolutely love the gameplay and the community. It’s fiercely competitive in the highest tiers of Ranked, but also very friendly and welcoming in the plaza and Turf Wars. This little writeup is for a special part of the community I haven’t talked about in my previous Splatfest writeups, the Japanese gamers.

END_OF_DOCUMENT_TOKEN_TO_BE_REPLACED

Hope everyone’s doing well. There’s a lot going on in the world, but none of it really matters when you’re sipping some tea with a quality videogame. In any climate, our personal happiness and growth is the most important and powerful thing we can offer the world. 2017 is not a year I am comfortable predicting, it could be really good or really bad depending on a variety of factors out of our control. One thing I do know, is that our ability to have fun and get hyped is entirely within our means. It’s true. You could have fun at any given moment without warning. I want to kickstart the year on this site with a bit of spark, so here’s a buncha fun, real stuff to get hyped for right now in the gaming community.

END_OF_DOCUMENT_TOKEN_TO_BE_REPLACED

After 1000 hours of intense Splatoon play, my left analog stick was getting old and losing its freshness. It would start to do its own thing in the middle of games, randomly not responding, going down, right, wherever it wanted. This is not a common console problem related to calibration, but a problem with the actual piece of tech inside. Wii U’s analog stick is a bit different to what you’d expect, with a circuit board “sensor” reading inputs instead of the joystick itself.

END_OF_DOCUMENT_TOKEN_TO_BE_REPLACED

The internet has been buzzing ever since Nintendo stealth-announced Code Name NX in a tweet on Wednesday.

END_OF_DOCUMENT_TOKEN_TO_BE_REPLACED

Night has fallen, for the first time in weeks. That means it’s finally time to slee- no, it’s time for SPLATFEST! I made my way to the plaza and couldn’t believe my Inkling eyes.

END_OF_DOCUMENT_TOKEN_TO_BE_REPLACED

I wanna be the very best, like no one ever was
To splat them is my real test, to claim the turf wars
I will travel across the ink, letting off inkstrikes
Teach Pokemon to understand, the freshness that’s insiiiiiiiiiide

POKEMON, GOTTA SPLAT THEM ALL!!

Yeah!! The humans may have been useless, dumb and weak, but they had some pretty fresh entertainment in their day. Pokemon Blue and Red are popular videogames of their era that have recently gained popularity in the retro scene of Inkopolis. These games are not quite as impressive as Squid Jump or Squid Racer, but they have their own charm that has attracted large numbers of Inklings to the arcades. Even though the humans who made these games were wiped out, cartridges were found washed up on shores and we’ve managed to recreate the highly complex arcade cabinets that would have played these games. Inklings have been training Pokemon to stay fresh, with battling and trading becoming common place as Blue and Red trainers help each other complete their Pokedex. Today however, we are fighting for our favourite version and the only thing that will be traded is turf. 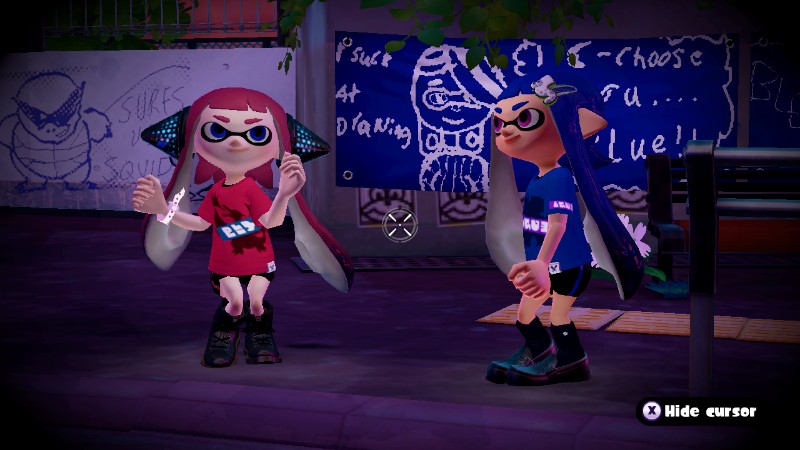 END_OF_DOCUMENT_TOKEN_TO_BE_REPLACED

A New Year is upon us and every Inkling is keen to make a fresh start to 2016. Today’s Splatfest is a war over riches and fitness as Team Money and Team Fitness battle it out. I have chosen Team Fitness because I am an honest fighter. The goal of “getting rich” has no personal meaning or existential benefit, and is simply the easy way out for Inklings with no self-worth. It is a temporary comfort that loses its freshness the second the ink dries out. I would rather die on the outside, than be dead inside. An Inkling’s respawn ability encourages growth and fitness, and as a member of Team Fitness I am not afraid to make a mess and put down those money grubbing squids no matter what the cost. Furthermore, Splatfests are about teamwork and Team Money quite simply are not trustworthy. In it for themselves, they are in for a rude awakening when their scattered team in-fighting is destroyed by the efficiency, strength and speed of Team Fitness. To aim for “richness” as a lifestyle is to drift away from freshness. Fitness however is freshness, and fighting for freshness is fighting for our very existence. If Team Money triumphs, the Inkopolis economy will collapse and prices in the plaza will quickly skyrocket due to greed. Eventually we’ll be buying gear off Spyke and the Sea Snail business will also crumble as a result. Without fresh gear and Sea Snails the Inklings can not stay fresh, and will go extinct. This is a battle for our existence as a species.

END_OF_DOCUMENT_TOKEN_TO_BE_REPLACED

It’s a debate that’s raged for centuries. Wars have been fought over it. Entire civilisations have fallen. Since the dawn of time, squids have fought over whether or not pineapple belongs on pizza. That’s right, the age old question. Does pineapple belong on pizza?  Ancient drawings from million year old squid civilisations depict a pizza with the pineapple being removed. Some say this proves it’s not an ingredient, others suggest the pineapple is being removed during the act of eating, and therefore part of the pizza. Pro-Pineapple Propaganda suggests it’s not even a true relic, but the work of Squid Satan. The true purpose of the pineapple remains a mystery, and this unanswered question has been responsible for untold bloodshed and inkloss throughout history. Today, it’s finally going to be answered in the most definitive way possible; a Splatfest.

I’ve joined team Anti-Pineapple because I am Pro-Freedom. “Pro-Pineapple” is founded on a lie, that pineapple has no place other than pizza. Pineapple should not be restricted to pizza, but have the right to be placed where ever is most convenient or appropriate. I believe the Squid Elders would have it no other way, and today, I will fight for that belief with a Splattershot in my hand, and pineapple juice in my blood. I am fighting for freedom. 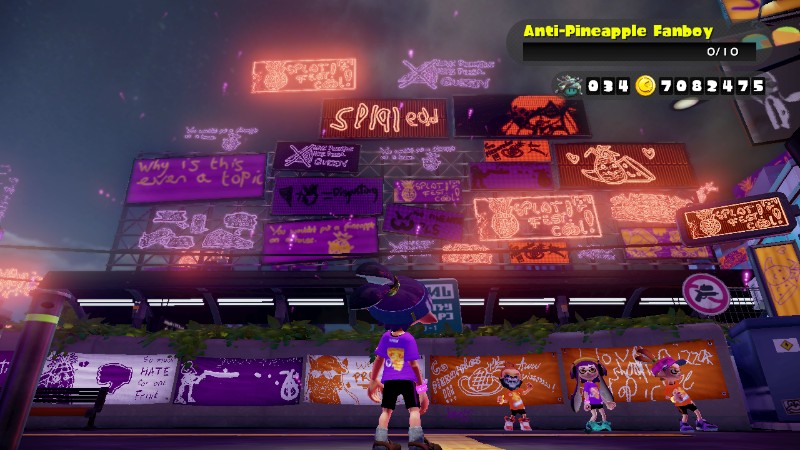 END_OF_DOCUMENT_TOKEN_TO_BE_REPLACED

Saturday, November 21st. The day my heart was ripped out and thrown around a giant hall in a bloody mess. No, not from a pretty girl who broke my trust. It was because my entire life was presented to me in the purest, most innocent way I could understand; through my favourite videogame memories. Every generation of Pokemon was celebrated one after the other, with hundreds of people sharing music and memories together in a brilliant performance by the Sydney Symphony Orchestra. The last 16 years of my life were set free to swim around the concert hall, completely naked. I could see everything through the sound. My first Game Boy, my first ever Nintendo game in Pokemon Blue, the excitement for Pokemon Gold & Silver’s launch, the grinding I did in Pokemon Sapphire to train for a tournament, , my midnight download of Pokemon Y. All the different places in my life where I embarked on each Pokemon journey. Such a huge range of situations would normally create a disconnect, but I left with an enormous sense of clarity. 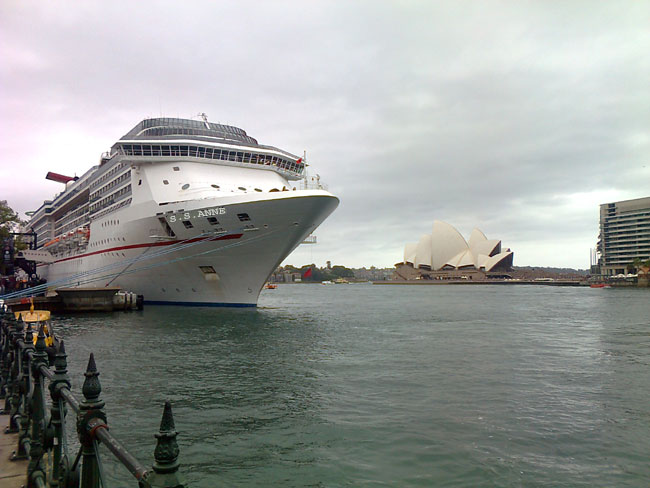 END_OF_DOCUMENT_TOKEN_TO_BE_REPLACED

Every few weeks the Inklings gather for a festival like no other. Splatfest pits two teams against each other, providing contrasting topics to debate over and throw ink at. Smack talk is laid down, drawings flood the Miiverse, and splats come loaded with purpose. This week it’s Dogs vs Cats, and I’ve just put on my Splatfest Tee to represent Team Dog. First, let’s take a walk around Inkopolis and absorb the atmosphere!