While Americans have been updating their Wii U’s and drawing dicks in Nintendo Land, I’ve been playing GrooveRider, the best slot car game ever made. Browsing the Playstation Store I noticed this PS2 classic for $8 with an average user review of 4.5 stars. Could a slot car game really be that good? Sure, why not? I downloaded it immediately without even consulting the internet, because that’s the kind of risk worth taking.

My head is still spinning from beating every cup, this game is insane. As it turns out, slot car racing at 120kph is very demanding on the reflexes. The controls are easy, just push forward to go forward and L1 / R1 to switch between 4 lanes. Each lane has different boost pads, obstacles, item boxes and opponents to destroy and the challenge pretty much lies in being in the right lane. Yes, this game has weapons. It’s basically Wipeout in the dining room, the track design is amazing and has you driving under tables, across benches, around washing machines, under falling bottles and dodging plates. The sense of scope is huge on these everyday items, I felt like a little brat causing explosions in the kitchen.

Even though you don’t have to turn, there’s a lot of finesse in cornering. Most corners you can go full speed, but a sharp turn will throw you off the track in brutal fashion. An exclamation point appears above the car if you’re carrying too much speed into a corner which helps give some feeling of grip. The real challenge in this game is simply not flying off the track and exploding, if you can do that then you’ve won the race. There’s infinite respawns, but it takes huge chunks of time and the game often drops you off in terrible places, either right before a mine or heading towards a cliff in the wrong lane. 1 mistake usually leads to 3. The tracks are full of obstacles and you have to keep a keen eye on what’s up ahead, it’s extremely difficult to judge what lane some obstacles are in until it’s too late. There’s even switches you can run over on the track to bring up obstacles in other lanes, or open shortcuts. Lane changing has to be rapid and decisive with things constantly changing. 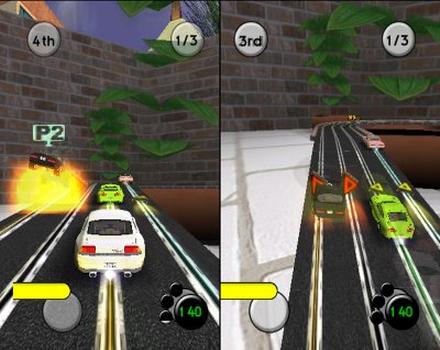 Like Mario Kart 7, this game has some awkward items. There’s a “jump” that flings you up in the air, but there’s almost nowhere you can use it without killing yourself. Taking shortcuts with it is extremely risky and you gain no time at all by doing it. It CAN be used to jump over obstacles, but usually without success (that didn’t stop me trying every time). The boost can also be a burden, if you use it anywhere but the straight then you’re dead.

The mine is a devastating item in close combat, pulling into someones lane and dropping it before they can react feels amazing. You can look behind you by pressing Circle but it’s not worth taking your eye off the road, bad things can happen very quickly. Another thing I like to do is drive side-by-side with another car and sandwich them in their lane until an obstacle appears. Unfortunately the CPU also knows this trick, and they are absolutely brutal in the later stages of the game. Their reaction times are baffling, they always know what lane you’ll be in and how to fuck you up. It’s downright the smartest AI I’ve ever seen in a racing game, I’m talking DarkSim level bullshit. They can predict what you’re going to do and they’re lethal if you give them half a chance. They aren’t impossible to beat, but it does mean you have to master the track and use items in the right places. I had a lot of frustrating moments but always hit the restart button without hesitation, the racing here has a strange addictive quality to it and you can always win if you stay cool.

GrooveRider has really surprised me with its depth. I wanted to play something different and certainly got that, the gameplay mechanics are completely alien. It starts off somewhat relaxing and easy in the 3 volt championships, then gets incredibly competitive at 9 volts. There’s a good amount of tracks with crazy layouts (over 20) and cars that handle drastically different. The Formula 1 car is hilariously fast in a straight and impossible to keep on the track, even the godly AI struggles with it. My only complaint would be the music, instead of screeching guitars there a seductive soul singer trying to undress me with his voice. I can’t recommend this game to anyone, because it does a terrible job at being a team-based World War 2 action FPS. However if you think slot car racing is a good way to spend a Tuesday night, then you wont be disappointed. This game takes slot car racing into outer space and brings the whole house up with it.