Well, it’s official – I am a filthy casual kiddy grandma gimmick gamer, intent on ruining the secret underground club of hardcore. Thanks to the 3DS’ heavenly OCD ability to keep track of absolutely everything you play, it turns out I’ve put just a bit of time into Hudson’s humble little DSiWare title Tetris Party Live. 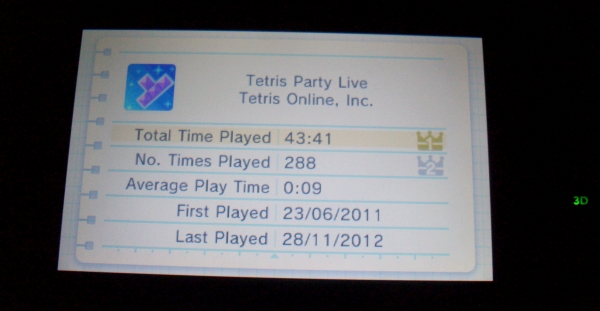 See that average play time? Yeah, the game has a ten minute time limit by default. You can fart around with various menu screens for an endless mode, but that instant ‘Play Tetris!’ option via the title screen is just… it’s right there!

Tetris Party Live (and the occasional can of heart-decaying energy drink) is how I stay relatively entertained during train trips. Provided I can get a seat during peak hour, that is. It’s hard to play when you’re crushed between several armpits and butts. Speaking of which, the game’s handy for extended toilet trips too.

I imagine if I found myself falling down an exceptionally tall flight of stairs, I’d probably bust out some Tetris for that trip as well.

I’d really like a new eShop version to take its place, though. The other reason I take my 3DS everywhere is because of how addictive StreetPass is, but Tetris Party Live disables that due to its DSiWare nature. Sure, there’s the original Game Boy version on the Virtual Console, but loud inappropriate fart noises to paying seven bucks for that.

Also I just found out you can’t even buy Tetris Party Live anymore. At first I assumed it was because Hudson Soft shut up shop earlier this year, but no. It was seemingly taken down because the game’s publisher Tetris Online Inc. lost the license to Tetris from The Tetris Company.