I recently picked this game up on the cheap and it’s been an unexpected ride. Far from a cut-and-dry puzzle game, Hollywood Crimes comes with a bizarre morbid atmosphere brought to life with creepy live actors who take their roles very seriously. The concept makes no apologies for its blatancy, you’re a contestant in a Puzzle Game Show in 1961 and weird things are happening between rounds. A killer leaves touch screen puzzles (with instructions) behind at crime scenes and the FBI calls you for help. Yes you, the Game Show contestant who has competed in 1 round!

The production values are surprisingly high with fully voiced cutscenes and a well done 3D effect, making these actors look like flat cutouts on the screen. The voice acting is done with a lot of enthusiasm, with the game show host dropping lines like “you’re DEAD ON!” and smiling suggestively. The combination of game show and crime mystery makes all of these characters quite unsettling.

The puzzles themselves are nice with a few clever ideas and a lot of variations in style. I’m not great at puzzle games so I spent a good 10-20 minutes on some of these, but when the solutions click it’s very rewarding and I think that’s the sign of a good puzzle. There’s a lot of easy ones, but there was a sliding block puzzle I was simply too dumb to do (never managed to complete one of these in any game, not even Wind Waker). Luckily I’d saved over 50 “hint tokens” from acing many of the previous puzzles, and you can use these on a puzzle to give you hints until the puzzle solves itself. This is a great way to allow players to progress even if there’s some puzzles that are too difficult, it made me more adventurous in my problem solving approach and I never got frustrated. 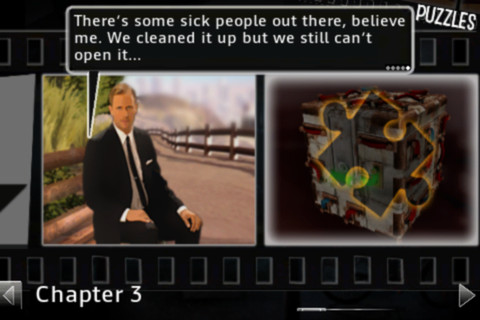 The controls are functional but a bit sloppy. The circle pad is used well to rotate objects, but sometimes the touch screen has problems registering. The window for touching things feels rather small and the response time is slow, meaning if you draw a line it’ll show up on the screen 2 seconds later. There was one puzzle with controls so bad I had to abandon it; spinning wheels that move when you tap sliding arrows. Problem is the slider barely responded to the touch screen, I had to tap it 3 or 4 times to find the right spot. Due to the nature of the puzzle, it was impossible to tell whether or not the wheels couldn’t move or if the swipe simply wasn’t registering. Luckily this puzzle was an optional hotel room distraction and not part of the game show.

The Game Show format is set out in a way that lets you choose the puzzles to tackle, based on the description and difficulty level. Your goal is to get more points than the other contestant, with a maximum score achieved by picking the hardest puzzles and not asking for hints. After each round it shows graphs of your scores and your “popularity” compared to your rival continually goes up; it’s a nice little motivator as it leads to more letters from fans. Between rounds you get to read these letters in your hotel room, some of them quite funny and some contain optional puzzles to solve. The sound effects of people talking in the lobby create a nice buzz and a rather soothing environment in the hotel.

The 3DS camera is used in some scenes as your face abruptly appears in real-time on a giant mirror in your hotel. The graphics here are terrible with one of the ugliest character designs I’ve ever see.. wait nevermind. You’re also prompted to take a photo of yourself early on which is used in newspaper articles among other things. Pretty simple feature but it’s nice to see a developer making use of the 3DS’s strengths, and the little things really add to a bizarre experience like this.

Overall it’s a fairly short game with 6 rounds and 140 puzzles total with a lot of puzzles that repeat in a harder difficulty. The surreal atmosphere makes it fly by even quicker as you try and figure out what the hell is going on. I compared it to Hotel Dusk in the title but it’s not nearly as engaging or interesting, the story is very simple and the conversations are over after a single line. The writing isn’t bad but there’s just not enough of it to create a narrative. It’s not a great game but Hollywood Crimes is worth getting if you want to experience a morbidly deadpan 1960s Hollywood setting and test yourself against a few clever puzzles.