Grubdog was alone. It was 2am and he couldn’t sleep. He was looking for a new game to play, not just any game but something special. Something to fill that empty void in his heart. He lived alone, all his friends were pixels and words on a screen. He was happy that way, with his choices. Sometimes though, it became hard to see what was in the distance. All he could see tonight was his PS3, as he shuffled towards the new PlayStation Plus games of May. “Thomas Was Alone?” Why was Thomas alone? Would Thomas be his friend? One 300mb download later, it would all become clear. 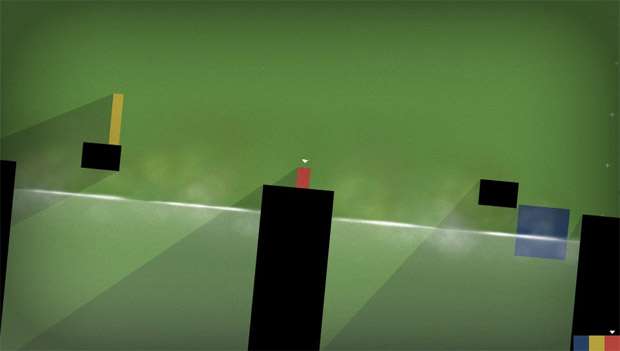 Thomas Was Alone takes simple platforming and brings it to life with thought-provoking scenarios and commentary. A narrator talks in an everyday tone about what the blocks are doing and feeling. The narrator has no identity, he’s simply a way of communicating the actions of the blocks. The blocks never talk because they can’t, they’re blocks. However, they still have names, thoughts, feelings and a purpose; translated not just through the narrator’s voice but the gameplay itself. Everyone has to work together to access new areas and you can’t leave anyone behind because every block has its own individual exit to fit its shape. All blocks must find their exit to complete the level, and a sense of comradery develops. Some exit doors are floating in midair and require a leap of faith that will kill you if the other blocks aren’t in place. How much do you trust your friends?

You control one block at a time and cycle through them with L1 and R1. Each block has it’s own purpose, with different shapes and abilities (colours) required to get through certain obstacles. Even a self-conscious, small, colourless block has a purpose when it works together as a platform for other blocks. The platforming is never difficult and the controls are easy and flexible, progression is more of a puzzle than a skill-based assault.

The writing is phenomenal, it successfully translates the life of the blocks to something I related to as I played. Do these other blocks need me? What can I do to get what I want? What can I do with my strengths? The structure of the game smacked me in the face with a crystal clarity of my own life and how to achieve things. Is it really as simple as jumping up there? The first character I met in the game was named Chris as if I was meeting myself in my own head. The fact that this was done with jumping blocks and not Unreal Engine 3 speaks volumes about the importance of the gaming experience. Music plays a big role, it’s surreal and relentless, never stopping for a load screen or level transition. Computer blips merge with violins and pianos to create a thick background melody. Not thundering or catchy, but welcoming.

I had no idea what this game was 2 days ago, and now I’ll never forget it. If you remove the sounds, music and writing; then you’re removing the game because this is what it’s all about. Companies are pouring millions into the visual fidelity of games while the audio side is still extremely infant, and Thomas Was Alone proves it can be just as powerful. It’s still a solid puzzle game on its own, but a bit on the easy side. The game felt short and I beat the whole thing in 2 sittings, but looking back on it 100 is a hearty amount of levels. It wasn’t difficult because I wasn’t measuring it, it never felt like a chore. The game instills a sense of purpose and determination to keep going, to live as full and free as you can. The only time I even thought about my progression was when a trophy pop-up BLING’D the screen. The game is on PS3, Vita and PC, and now inside my heart. I recommend it for anyone looking for a friend.