At the EB Expo this year I was lucky enough to drive a race of Mario Kart 8. By lucky, I mean I shot my arm up in the air at the speed of light and almost lost it in the rafters. The Nintendo area had a screen on stage for a number of different game events, including Just Dance and Mario Kart 7. Mario Kart 8 was a special game they only pulled out every few hours, and I was very grateful for my chance to play it. 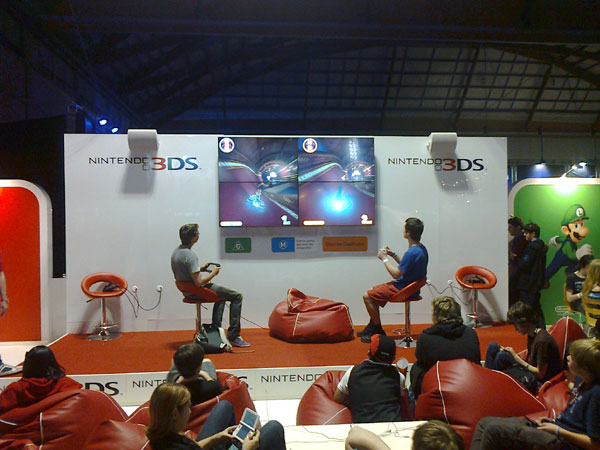 Here’s the setup with two random dudes playing, one Wii U GamePad and one Wiimote. Unfortunately when I got up, the other kid (my opponent) wanted to use the GamePad so I let him and took the Wii Remote, because kids always come first. I’d used motion steering in my many hours of Mario Kart Wii so this was no hurdle for me. Let the race begin!

It all happened very fast, which is not good in a 2 lap race. I nailed the start with a perfect boost on the “2” countdown; exactly the same timing as Mario Kart 7. Immediately I was hit with a big blur of insanity as the track detail engulfed my entire peripheral. I was sitting 2 metres away from the screen on that tiny stool (shown above), leaning back and arching my neck upwards to take in the whole picture.

The first lap was… “experimental“, I pressed every button on the Wiimote to try and find first-person view. Unfortunately it wasn’t available. It’s the only view I use in Mario Kart 7 so the third-person perspective required some adapting. Furthermore the camera wasn’t directly behind the kart, it was tilted to the side in a bizarre cinematic angle you would see in a racing sim with no gameplay. (all of them) 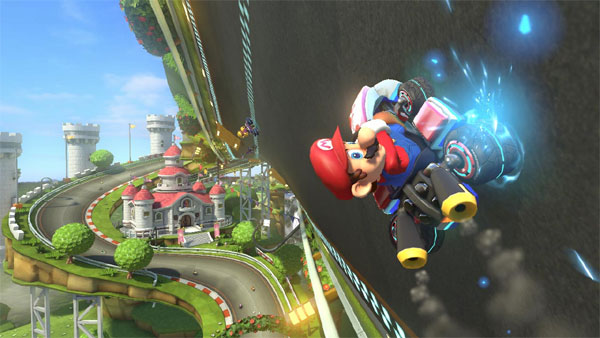 Things got really interesting in the zero-gravity area as the kart’s wheels flipped sideways. The sparks generated a bubble of electricity around the kart and a new ability became apparent; if you bump wheels with another racer, the electricity generates a speed boost for BOTH players! I bumped into Wario a few times and we overtook a few karts, it’s not a huge boost but it makes a difference. Smaller than a mushroom but more than a powerslide. It’s going to be really fun using this online and working together with people to catch first place. (then betraying them)

The dpad worked to fire items backwards and forwards (the demo only had basic items like shells), but I pressed B to powerslide hop and nothing happened. I figured it was not in the demo, but a few corners before the end I found out that 2 was actually brake / powerslide. Awkwardly placed right next to the 1 button which makes no sense and is not how I played Mario Kart Wii. The Wii Wheel was made solely to accommodate the B button at the back, so it baffled me they didn’t use it. Sliding one thumb to press 2 buttons doesn’t work well, even though I did pull it off once I knew where it was.

I came 5th in my clumsiness and got beaten by the kid, but I was the one who felt like a kid because the game blew me away. I probably left some drool on the seat, the graphics were so good and there was a ton of detail in what was a very simple track. I didn’t see a name for it, but I’m guessing it’s the new “Mario Circuit”.  The experience was very short and overwhelming, but I felt I had to write something about the newest entry in my favourite series, especially because I was so fortunate to play it. I’ll be really disappointed if first-person view is gone because it makes motion steering very unnatural, but when I played a demo of Mario Kart 7 a few years back it had none of these features either, so fingers crossed it’s just a demo thing.  The game is about 6 months away and that’s how long I’ll have to wait to avenge my performance and get a win. I really like the new gravity aspect and it should open the door for some crazy track design, my mind can’t even comprehend what the new Rainbow Road will look like.

One thought on “Mario Kart 8 – One Race (DETAILED IMPRESSIONS)”