It’s been one week and this game has already turned my brain into coins. I’ve made a bunch of levels and played hundreds, and when I go outside I see potential Mario levels everywhere. The shape of my fence. The hills and trees beyond the farms. The crane at work lifting stacks of wood up to the flagpole, I mean conveyor belt. I’m gonna whore out some level codes in this post, but first here’s a little bit of a *dingding* writeup. What was that? Don’t *dingding* worry about it.

First thing’s first, unlocking content. This was a big talking point leading up to release because “oh boo hoo we have to play the game to get things“. Big fucking deal over nothing. You start off with all the basic blocks and the delivery truck arrives every 30-60 minutes with a whole new set. I didn’t even care because there’s so much you can do with just a regular block it’s ridiculous. Make a level with pipes and Goombas. Arrange blocks. Make gaps and jumps. Draw shapes. Any shape in the world. The excitement of playing this game for the first time outweighs any trivial content delivery method. Play the game and play some more, it’s as simple as that. If you NEED things like sound effects to make a stage, then this game probably isn’t for you. Mario Maker encourages creativity and uploading multiple stages only has benefits, it’ll give you more total stars and your friends will have more levels to play. You can come back later with an idea when you get the tools for it. Plenty to do. So much. To. do.

Next is the menu presentation. I’m mixed on this because there’s a shitload you can see and do, it’s just a bit of a mess. I think the presentation could’ve been done better because sometimes to get somewhere, it takes multiple screen transitions and the menus are scattered all over the place without much visual consistency. Options can be on the top left, top right, assigned to different buttons, scrolling screens, tiny arrows. Despite this, the function is robust which is far more important. You can see stats on levels you’ve uploaded, including not just who’s played the level, but who’s beaten it. This is a great indicator on whether or not the level you made was too hard or too easy. Seeing the 0.4% completion on one of my stages was a bit disheartening, but it’s all part of the learning process. The feedback the game gives you is phenomenal. You can also comment inside courses, to express something on the spot that will show up as a message on the TV. If someone’s put a message right over a difficult jump, you can look at the GamePad screen for a clear level. Talking to you, James.

Just kidding, I like to see that. When you get close enough (the next piranha plant), it fades from white and becomes clear. By the way, the spin jump in SMW and NSMB can bounce on certain spikes like these piranha plants, and it’s really easy to do. Just tap the button and you don’t even have to hold it, or press it again. Holding it will just give you max height, pressing nothing will do these low hops necessary for this part. A lot of people are just learning this now and it’s cool. You can also jump a bit further in NSMB if you tap the R button in the air mid-jump, but I wouldn’t design a level around that.

The levels I’ve played so far from the community range from good to very bad, but this is entirely expected with hundreds of thousands of people playing the game for the first time. Firstly on the topic of other levels, I’d like to say every single level from my friends has been fun. It’s such a delight to boot up the game and have an onslaught of new friends levels in my timeline to check out. Outside inputting codes and following people, you have the option of doing completely random stages and a lot of these have been bad. It’s just a fact that 8 year old kids are making awful troll levels and enjoying the game in their own way, and I’m OK with that. It’s also the first week, so people expecting masterpieces need a reality check. People are having fun. There’s an option to skip levels so it’s not really a big problem, just hold the minus button for 3 seconds. Sometimes I’m amused just by how bad a level is, so there is some value here. It’s nice to see so much diversity and weirdness.

How do you define a bad level? This is something I thought would be difficult to pinpoint, but fuck me it’s plain as day when a level is bad. I’m talking random enemy spam that just blocks the entire path. Throw a bunch of enemies on the screen, and see if you can fluke your way to the finish between random gaps. Bam, level with no design whatsoever. You put no thought into it beyond “let’s make a bad stage“. Not fun to play because instead of learning a layout or applying skills inherent to the game, you’re just learning a single enemy pattern you will never go back to again. Sometimes this is OK if it’s not the entire level or you want to add some improvised intensity. I think the most important thing is to just create and play as many stages as you can, because you’ll keep getting better ideas. Good levels can be hard as long as they are playable. I’ve done a few ridiculously precise ones where I’ve died 50 or so times, and still enjoyed them because they were fair and consistent. Purposefully putting a dozen pixel perfect jumps together is probably not a good idea though. You might think it’s hardcore but a lot of people are going to quit at the mere sight of it. Also if you think making small gaps between spikes in a swimming level is a good idea, then fuck you.

I’m having so much fun with this game and I would recommend it to anyone, just like I’d recommend a regular Mario game to anyone. If you don’t want hard levels, just pick “Easy” in the 100 Mario challenge. The game is very accessible and there’s an engaging calmness I feel when using the level editor, it’s so chill. Hours have passed by without me even noticing. Dragging items around has amusing sound effects, and the new music composed for the game is very cool. My favourite style for stages at the moment is NSMB, which surprises me because I don’t like that actual game as much as other Marios. The movement is just a lot of fun to experiment with. The physics and controls in each game are a tiny bit more polished and than the original releases which is a huge deal, because they already controlled extremely well. It’s most apparent with SMB1, but even NSMB feels better than NSMBU. It’s worth owning this just to have clear widescreen versions of SMB1, 3 and World. Mario Maker looks and feels amazing and is the perfect way to celebrate Mario’s 30th Anniversary.

I’ll end this with some levels to check out from myself, and other Pietriots Akai and Matto. (Yes, other people still exist on this site!) 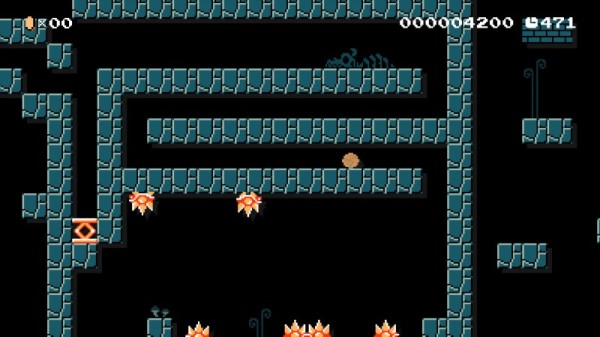 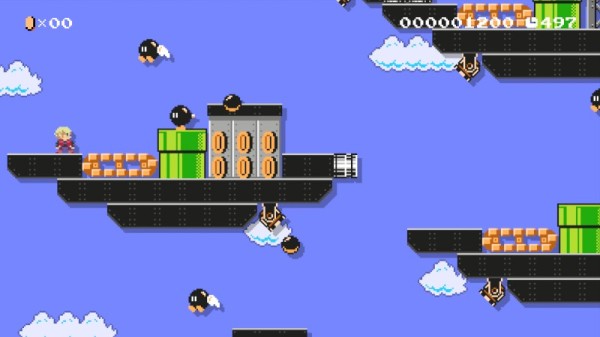 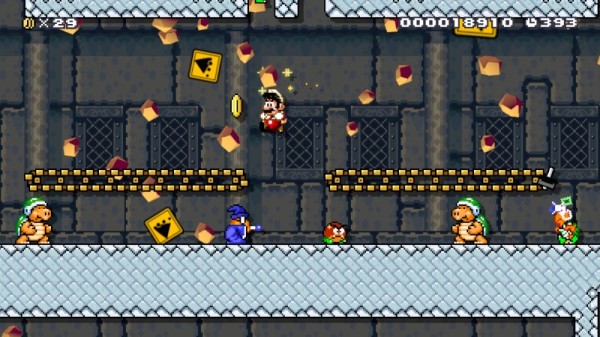 If you like these levels you can follow us in the game by clicking the heart, we’ve all got a lot more on there. I would love to play more levels, so please share your codes in the comments if you’ve made any, or your thoughts on the game. Happy Mario Making!