We’ve all done it. You’re playing your favourite legendary videogame with a very important quest to do. Traveling across a field to your next destination, your mind is heavy with responsibility. If only there was something to ease the tension. Swaying in the wind, something catches your eye… fresh grass. Thick, luscious, green, just begging to be cut. A few slashes can’t hurt, right? HYAH! CHOP! Health and money fly out but you don’t even care. The sound effect is rewarding enough. The grass disintegrates into the air along with your troubles. The leafy smell comes through the screen and you start to feel connected to nature. The objective of saving the world fades into the background as you seek out more grass to cut. HYAH! More! MORE! MOOOORE!

What if I told you that you could cut grass all day without any other quests to worry about? What if saving the world wasn’t your problem? The protagonist Shiba Kari of The Legend of Kusakari has life figured out.

In this world, heroes and monsters are battling it out and you know what? You have more important things to do. Armed with a scythe, you are tasked with chopping all the grass so heroes can fight confidently on a flat surface. You are SO crazy about grass that you gradually lose health just by existing and not cutting grass. This creates a grass-cutting frenzy of gameplay that encourages obsessive behavior.

You can slash with B, or do a spin attack with A. Your weapon has 4 “levels” that can be charged up during gameplay simply by cutting lots of grass consecutively. As you charge up with normal slashes, the level will go up and allow you to demolish more grass than usual with a powered-up spin attack. There is thick, stubborn grass that requires three normal slashes to take down. HOWEVER, at max level you can take the dark grass out in a single spin attack. This intense mechanic rewards you for constant slashing and creates a sense of urgency and fulfillment. The catch is your level will start to fall after each spin attack, so once you’ve picked some thick grass to target you can’t look back. Only the most courageous can tackle large amounts of grass in a single swing. 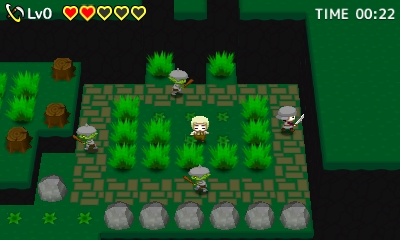 Your movement is controlled with the circle pad and things can get a bit wild. It’s fine while walking but if you hold L or R to run, you can wobble out of control like a skidding car. It’s very easy to run into enemies and this can have a devastating impact on your grass-cutting career. With your health constantly draining, hitting an enemy could take away a heart you can’t afford to lose. This adds some precision and patience to all the wild grass-cutting because you have to measure your excitement a little bit. Just remember, if you die there will be nobody to cut the grass. Survival is paramount or the job won’t get done at all.

As you get to the later levels there are some insane monster patterns you have to navigate. The level design gets quite challenging and it becomes really important to figure out a safe path. As the levels get bigger you’ll also find more blue grass, which restores health. Picking these up at the right time is the key to surviving long enough to actually finish the stage.

With 60 missions I find the replay value quite respectable for a small arcade game. There’s a side-objective to each level (either don’t miss anything, or don’t get hit) as well as rankings from S to C based on your time. As a fan of speedrunning I got a similar feeling of satisfaction from optimising each level in this game. You can slash wildly and get a B or C rank, or plan the quickest path through the stage, the best places to fill up your level to max, and the best times to use your spin attack to get an S rank time. This is where I gained a lot of respect for the level design, because finding gaps in enemy movement saves a lot of time.

Endless Mode has an online leaderboard and I thought I’d take up the challenge. This takes place in an open field with rectangular patches of grass that constantly respawn. Every 40 cuts, you’ll spawn a blue bit of grass to extend your health and let the game continue. This mode is INSANELY addictive and I’ve had some long sessions that I had to stop because my hands hurt. I find it really engaging, because it’s one of the few “endless” modes in a game where you can’t play it safe. It rewards aggressive play because you have to get a high amount of grass cut to keep yourself alive. You also have to scan the bottom screen to see where the blue grass spawns on the overall map. It’s a smart formula and I hope more people give this mode a try. I’m currently 9th in the worldwide leaderboard and I dare you to knock me out of the top 10.

While I love the gameplay, my opinion on this game is a bit mixed when it comes to presentation. The graphics are very simple which is mostly a good thing, except when the cardboard cutout enemies make contact with you. It’s hard to really make sense of some of the hit-boxes when they are moving so wildly. Their sideways hitbox will be tiny, until they move downwards and it becomes gigantic. It’s mostly fine but there were a few instances where I couldn’t tell where I was “behind” the enemy. It’s consistent, but just takes some getting used to. It might just feel weird to me because everything else is in full 3D. The animations of the fighting heroes are quite good though, and the 3D effect is very clean and pleasant. I kept the 3D slider on full the whole time to feel closer to the grass.

The music is the most unfortunate part of this game. The main theme has a trumpet purposefully playing out-of-tune, which is fitting for the game concept (grass cutter in a hero’s world) but just incredibly annoying. It was funny and cute the first time I heard it, but with the high difficultly in some later challenges, the obnoxious music opens the door to a mental breakdown. Inside the levels it’s not so bad, a bit more relaxing, but the trumpet kicks in at every results screen, and every time you start a level. I’m hoping the next game they make is about a trumpet player who learns how to hit the right note. 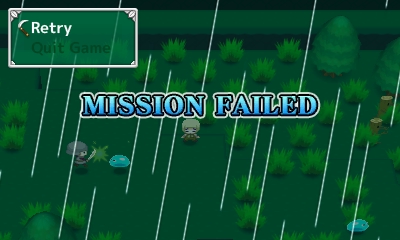 The Game Over screen is the only time it rains, and it looks really good pouring down in 3D. Honestly this might be the best graphical effect in the game, so it’s worth dying a few times to appreciate it. This also explains how the level regenerates, with the grass growing back in mere seconds from spears of nourishing water.

The Legend of Kusakari is $7 AU / $5 US / €4.99 / £3.99 on the 3DS eShop, and the first game made by Japanese development team Librage. Published by Australian team Nnooo, there’s an interesting interview with them here on their website. It’s lovely to see companies in different countries working together. Apparently they got feedback from Nintendo saying they really liked the game, that’s something you don’t hear often. It’s hard to tell if an Indie game is good these days, but this game definitely earns praise with its gameplay. It’s an extremely fun concept with good controls, fast-paced grassy action and smart mechanics to justify it. Highly recommended for any burdened hero looking for a real job.

3 thoughts on “The Legend of Kusakari – Freshly Cut Justice”