BOOM! There goes the lab. As you stand up and gather your wits, the last thing you remember is something being knocked over. You don’t know what was happening in the lab, and memories of your identity are just as vague. It must have been a big explosion. You’ve suddenly appeared in this well-constructed series of rooms with 2D platforms, throbbing enemies, bizarre surfaces and kickass music. What could the experiment have been? To create a Metroid game? 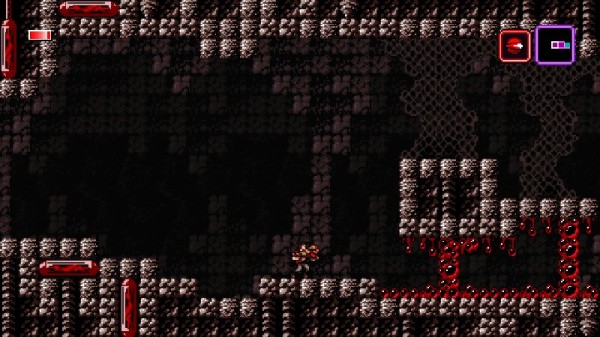 It’s quite easy to compare this to Metroid. As the original 2D game that pioneered side-scrolling in multiple directions, it’s a fair point of reference. It has basically become the definition of the genre. However, as soon as you start moving in Axiom Verge, the expectation of Metroid falls apart. You’re not Samus, just a scientist named Trace. Instead of majestically flipping around, the movement feels more “fixed” like Contra with a single speed while running and jumping. There are probably more appropriate NES / SNES games you could compare it to, but the overwhelming feeling I had from the start was to drop all comparisons. This is Axiom Verge. A brand new world to explore with its own purpose and mechanics.

The atmosphere is dark and a little unstable. You get a few dialogue boxes but you aren’t really told where to go, left to wonder and explore for yourself. This feeling of the unknown is so refreshing to experience in a scenario that is NOT an alien planet. You’re somewhere new, but the world is very strange. It’s not another planet. It’s not a natural environment either. You hear static noises and see blurry flashes, hinting at some kind of virtual reality or videogame multiverse. Enemies have their preset patterns and there’s an interesting presence of higher beings trying to communicate with you. 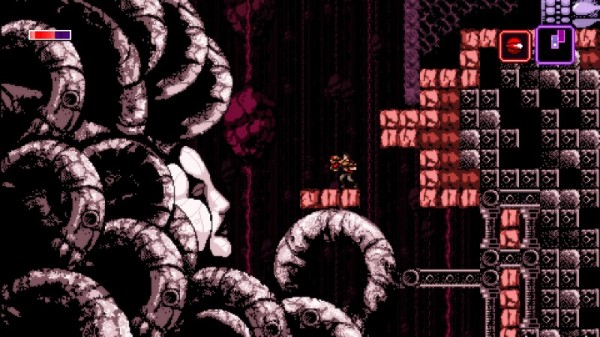 Axiom Verge is a brand new game world that had me poking at every wall and door like an excited child. As much as I love playing through a Metroid game for the 1000th time, I really missed this feeling of exploring the unknown. Just standing there at a dead end, thinking about what to do next. Getting “lost” in this game is an awesome, wondrous feeling that doesn’t come with the slightest hint of frustration. It’s just amazing.

With the movement being so basic, Axiom Verge relies on power-ups to open up the world. There are some very interesting upgrades and weapons, loaded with some creative bullet trajectories and fancy tricks. Many times in this game when faced with a dead end, I wondered “how the hell am I gonna get there?“. I’ve played a looooot of 2D games and sometimes feel like I’ve seen everything (even though this will never be true), and the fact that a game can still surprise me with progression in 2016 is impressive. I did not expect some of these abilities to be so useful and cool. I was lucky enough to go in blind, with no prior knowledge of how the upgrades would change the game world. At the risk of making this write-up a bit more boring, I’ll leave them a secret for anyone else to discover because it’s fun to learn what you can do.

One power-up I will talk about however, is the Address Disrupter. This is a fun item that is heavily used in the game to break down walls and change the way things behave. If you spray it and “hack” an enemy, they could start eating the wall next to you and reveal a brand new passageway. This hacking gun is fun to experiment with, and is always mapped to the R button for a good time at your fingertips. There’s also a drill mapped to ZR which is great to whip out for close range enemies, breaking rocks, or popping red bubble enemies. The crunchy sound effects are so satisfying. 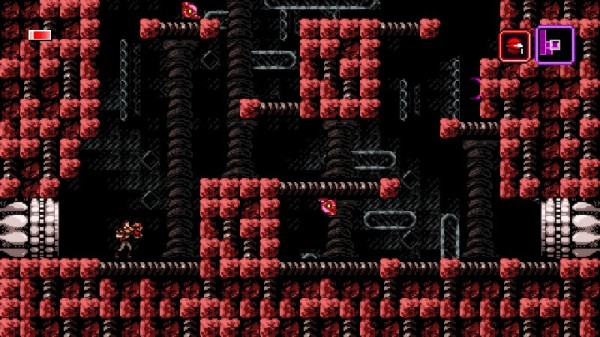 The dark graphics can be obscuring at times, and I couldn’t tell the background apart from the foreground in my first visit to some areas. This normally frustrates me but somehow in Axiom Verge, I feel like it’s worth it. The game is meant to be scary and unwelcoming. This uncertainty is present in every aspect of the game from the graphics to the sound, the story, enemy patterns and boss fights. This game is consistent in all areas of its atmosphere, something I will attribute to Thomas Happ being the sole developer of this game. That’s right, one man developed this game. Thomas Happ is responsible for the gameplay, level design, art, music, everything but the publishing and localisation duties. It’s an outstanding, inspiring effort to see a project like this even be completed, let alone become as great as it is.

The soundtrack is a good mix of digital and alien sounds and I really enjoyed the music. There’s a strong sense of rhythm and some creative samples and compositions that make it sound very professional and otherworldly. The melodies are all new while retaining the classic videogame punch of the NES era. It’s nothing I would listen to outside the game (same as most Metroid music, to be fair), but really suits the atmosphere and gets me pumped while playing. It would have been very easy to make an annoying soundtrack to this game with overuse of digital beeps, but it’s more on the pleasant side.

If there’s one thing I dislike about Axiom Verge it’s the enemies. There’s a decent variety in the way they look, but I found the approach to killing them awkwardly similar. Rather than feeling like “fights”, it started to feel like I was button mashing the whole time. Even with fully upgraded power, enemies are massive bullet sponges and this makes backtracking through rooms (especially late game) extremely repetitive. You just shoot a million times as they slowly notice you and bump into you, making you do the same side-dodge and jump moves in every room. It’s the main reason I haven’t bothered to Speedrun this game, despite it having a dedicated Speedrun mode. The Speedrun mode works just like the main game, taking out text and putting a timer on the screen. 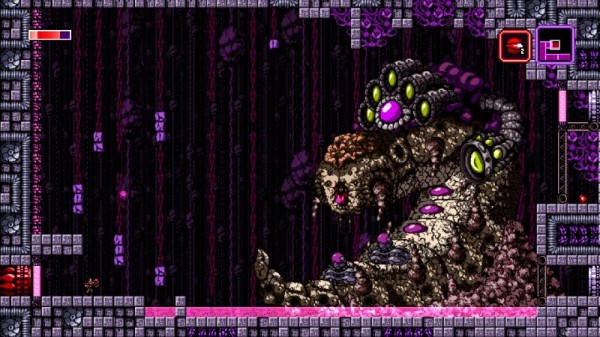 The boss fights look amazing, but suffer from the same repetitive patterns. Most of them die just from spamming shoot in the right position, without much creativity. The fun in these mostly comes down to avoiding their erratic patterns and jumping around like a madman. Some of them I found hard just because my hands started hurting from mashing shoot. I wouldn’t call it a huge problem of the game, but there are tons of different weapons so it’s a bit of a shame they aren’t utilised in creative ways for bosses. The encounters themselves are pretty interesting at least, in terms of story scenario. The end boss is also pretty memorable but you can find that out for yourself.

Overall I found Axiom Verge an immensely refreshing experience. It’s a very fun game to explore, with fantastic pacing that opens the world in a satisfying way. Even though I had a great time with Axiom Verge, I still have to disagree with critics who said it was as good as Metroid or anywhere near close to being one of the best Wii U games. I find that a sensationalist claim that is not only false, but detracts from the uniqueness of Axiom Verge. This game doesn’t try to be better than Metroid, and doesn’t need to be. It’s made by one guy, without anywhere near the budget or support. The movement is simple, the story comes from a vastly different angle, and creativity is emphasised in different areas of the gameplay. 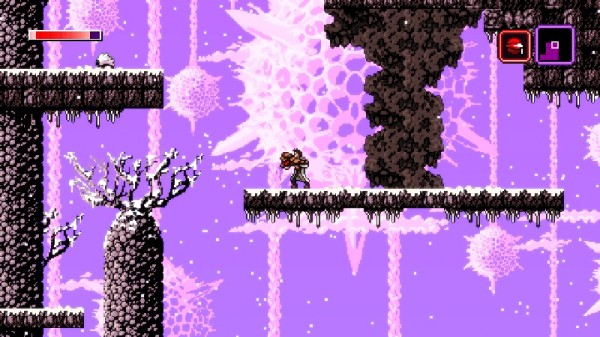 Axiom Verge is a game that’s probably going to feel different to everyone, depending on your experience with 2D action-adventure games. I still feel confident recommending it to anyone however, because the progression is smart and the world is very fun to poke. It has great controls, smooth graphics, and it’s a fun videogame by any definition. It made 2D exploration feel “new” to me again, and that’s one of the best feelings in gaming.