Very recently I’ve obtained a New 3DS XL and it has changed my life. First I’ll recap my review of the Regular New 3DS; I thought it was nice but it had some niggling problems that got worse over the months. To be honest, that was a pretty bad writeup. I didn’t wait long enough and I was too excited at getting something new. I shrugged off the flaws as the new 3D effect was so good. However, the more games I played, the worse it felt. The screen also felt too small for the SNES VC, and affected my handheld experience with Super Metroid. I finally decided this was unacceptable and upgraded to an XL. Was it worth it? 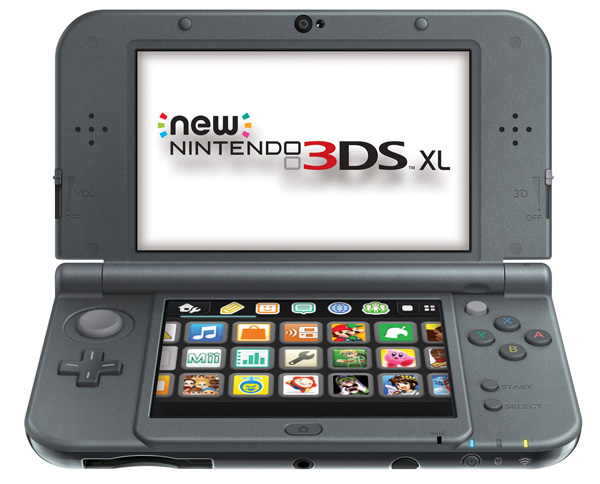 YES! As soon as I unfolded this beauty, I knew it was the right decision. This is a glorious beast of a machine and the best 3DS ever released. The bigger screen makes an enormous difference for me, and it feels more comfortable in my giant hands. I have no idea why I even got the regular one in the first place, I feel like I have been doing 3DS wrong all this time. This thing is perfect and I love it.

Yes, the top screen is big. So what? It’s called the XL, you dumb shit. Doesn’t mean it’s better.

At first I did notice that text and lines were blockier, it was a bit weird but this adjustment lasted about 5 minutes. It’s hard to explain but it just feels normal now, like a bigger TV. For contrast, when I look at the Regular N3DS now it looks tiny. For the games Ive been playing recently, bigger really is better. Pokemon and Dragon Quest are quite busy games, graphically, with small text in places and lush background detail. It feels like a proper grand experience now and it’s much comfier on the eyes.

Something I did not anticipate was the size of the bottom screen being so important. Now I can draw so much better, and it’s faster to tap on letters while typing stuff on the touch screen keyboards. In general I just feel more accurate while touching which benefits many games.

An absolute miracle for me is that the top screen does NOT flap on my New 3DS XL. This annoyed the shit out of me on the Regular N3DS, and I still do not know if it’s a design choice or not. Everyone on the internet said it was normal “it’s meant to wiggle a bit, so it doesn’t snap”, but after getting an XL with a proper solid screen I can confirm that my N3DS was suffering a problem. Either that or the design itself is shit, though I find it hard to believe a fact like that escaped the critical internet masses. Every comparison article I have read (before buying the XL) was fucking useless though. The screen on my XL does wobble a bit, but it doesn’t happen in gameplay like with my Regular N3DS which drove me insane. This is a Quality of Life-changing difference. Overall the XL feels like a higher quality piece of hardware, while the Regular N3DS feels like a cheap toy that could break at any moment. I fucking hate this thing now.

The battery life is also improved in the XL, lasting at least an hour longer with a bigger sized battery. I’ve already noticed this in my sessions. It’s not really super important for me since I mostly game near a power outlet, but it gives me more confidence to take it outside. Despite the bigger size, I find the XL more portable because it’s a more solid unit. I took it to work and got 22,000 steps in a day, while keeping 4 bars of battery. Feels good to be back in the StreetPass game. I’ve had it for 2 weeks now and it has not switched off by itself in my pocket, which happened a lot with my original 3DS and Regular N3DS. The slightest bang would switch those systems off. I thought that was just a shit problem with 3DS in general, but this perfect XL has opened my eyes. I may have just been unlucky with my previous 3DS batteries coming loose all the time, or it may be by design.

So why should I get the Regular 3DS?

Either to save $30, swap faceplates, or because the XL is too heavy. While the bulk size doesn’t make a difference to me at all in shape, it’s noticeably heavier. I had to kinda collapse my arms to rest on my bed the first few days of playing it after work, but I’m used to it now. It just suddenly felt “light” to me, but some people might struggle more than others. Being a 29 year old male with a physical job, I’m probably on the stronger end of the spectrum. It felt heavy even for me, so I can definitely see that being a problem. I’m really not sure how others would adapt. The muscles in your wrists are very tiny and complex, so it could also be a matter of adapting those to a new shape. A lot of people who hated motion controls and the Wii U GamePad failed to let this process happen.

For the gameplay experience however, I don’t think there’s anything better about the Regular N3DS. The sharpness of a smaller screen means nothing when you get used to it. It’s like saying a small TV has better graphics. Faceplates are a nice exclusive way to customise the look of your Regular model, but I never even bought any. Just get some fucking stickers.

This change has also made me realise how much better black is over white. This has nothing to do with the size of the models, since you can get multiple colours in each. However, my black XL feels more like a TV or proper monitor, and blocks out the world more effectively. It also allows the 3D to expand outside the screen with no interference. My white DS and 3DS models take some of the attention away from the screens and bleed into my peripheral a bit. This is probably a dumb personal perspective that will vary with everyone’s different eyesight, but it’s worth mentioning everything I can in this write-up. I was left so frustrated at other N3DS comparison articles. One of them even outright lies about the screen quality, by turning the N3DS brightness on 4 with XL on 5. Here are mine both on 5 brightness. Sorry for the crap quality, my mobile phone camera is the best I’ve got.

No, there is no difference in the screen quality or brightness. At least not in mine. In pic A above, the XL looks clearer, while the Regular looks clearer in pic B. It’s just because of the viewing angle on my shitty phone camera and an example of why you can’t take comparison pics like this too seriously. I could make either one look better.

The more I read, the more I feel like it is a lottery with every 3DS having its own tiny flaws that could ruin your life in different ways. Both my screens are good, but I have noticed a big difference with the surface. My Regular N3DS picked up dust on the screen all the fucking time. I had to wipe it every few minutes it was so bad, I’ve never had that happen on a portable before and I thought it was just because of the new place I was living in. Nope, it does not happen at all with my XL. I’m guessing there is some kind of magnetic difference, where the smaller Regular N3DS attracts more particles. Whatever it was, it was extremely annoying because after I wiped it, it would create another fingerprint that would distract me, then another as I wiped that one off, until eventually the screen was a bingo card and it was time to whip out the cloth. It felt way too precious for a gaming system. The XL screen is unphased by everything and I never have to wipe it during play sessions.

This might be an extremely biased comparison if I did in fact get a defective Regular N3DS, with extra flappy hinge and magnetic dust screen. However, those are not officially classified as faults by Nintendo, and this is just my experience. I’m very curious to hear thoughts from others who have extensive time with both models. What I can say for a fact is that the New 3DS XL is fucking amazing. If you’re upgrading from a normal 2011 3DS then it will feel even more amazing. My best advice would be, if something feels off on your current 3DS then go for a change. I had almost become a Wii U exclusive gamer since getting a N3DS, but it was just the crappy uncomfortable hardware subtly pushing me away. Now I’m gonna catch up on a lot with my XL. With the incredible 3DS library I think it’s worth it, regardless of what the future holds. I don’t even care about the Switch yet (until January) and I’m looking forward to getting more RPGs and future games on this thing. Bring on Dragon Quest XI, Yoshi’s Woolly World and Pikmin 3D in 2017.